Caught and Framed in the Bazaar’s of Lucknow

Aminabad and the endless bustling stream of determined shoppers is a picture every Lucknowite has grown up struggling in at some point in their life. The vendors with their insistent summons, the vehicles in strife, the rickshaw walas with passengers contently looking over the crowd and every colour, sound and element that makes a splendid classic small town bazaar ñdomestic hagglers, excited children, food stalls and all of the market’s spread on show-quench a feisty eye.

The many confusing lanes with curious names and their riches, of garments, of food, of various articles for the city’s survival, with Tunday’s kebabs at close hand, chikankari, the mosques and temples and hybrid hues, it captures an old city’s beat and with all of that, is a prudent shopping paradise!

The many faceted course of the bazaar takes an artistic turn around Latouche road. Small streets marking the corner of the road advance into a sheltered den and passage of pictures peeking form their platform. A burst of vivid images, vibrant colours mark the passage.

In the clamour of traffic and shopper and sales, what is this interesting place right in the centre of Aminabad?

Tasveer wali gali sets an aesthetic parallel to its neighbours. The lane starting around the end of Swadeshi market continues through the other end, spanning a few metres and from that shell has earned the street its popular name.

Around eighteen shops carry the mantle of satisfying the city’s ‘framing’ and adornment needs. Dating back to a probable, an approximation of about hundred years, “My shop was next to Jagannath lassi bhandar, which was very popular back then; forming the few shops there were” Shri Krishan, tells of its obscure beginning, owner of one of the oldest shops in the place. Mirza Yaqib’s and Gopal Mishra’s, whose friendship with Anupam Kher brought the actor to Tasveer wali gali at times, are the oldest shops started around the same time.

Over the years the demand for their work increased and so the business too expanded, from an odd three four shops to this entire alley of eighteen. Between them there is less competition and more camaraderie, existing as a whole rather than disjoint units.

A day in the life of our average Tasveer wali gali? Is contained in wooden frames that fringe beauty. The work involves framing pictures, certificates etc brought in by the customers as well as the sale of pre framed images. Glass cutting is also done here. Paintings include religious as well as simple works of art purchased from different places.

Earlier the pictures used to be only religious motifs, paintings of gods, Quranic texts and such. Now modern art also forms a significant and significantly remunerative part of the graphical designs, floral patterns, landscapes all beckon admiration from the onlookers. Another change is that of the material used. Earlier it was only wood that went into building exquisite frames. Now it’s mostly fibre that takes on the much greater variety of forms and designs to suit the customer’s demands all of which the makers readily meet. The cutting of the frames has been made easier now with the machines whereas earlier it was done manually.

“In all the bigger cities, Delhi, Mumbai and other places we have been to, there are shops that deliver framing jobs but no where a similar junction of wholesale shops is to be found. It is something quite unique to our city”. And indeed the street has rightly earned the reputation it has endowing Lucknow with an unusual offering.

Even as Ravi Khanna of Balaji Frames, helped by his brother, expertly hands down two three frames, nailing the pieces together and also tackling the consistent influx of customers, at the same time relating the particulars of his trade, he insists the work calls for no specific skills, “all one desirous of the work has to do is to pick up the frame pieces and learn; which is not a long process by any means”. He has continued in his father’s footstep, who still overlooks the work, a venture hundred years old.

So have most of the other shop owners, so one is bound to encounter the second or third generation of a family running the business proudly.

One common, candid complaint echoed by all our band of careful craftsmen is the typical, frugal Aminabadi shopper, bent on bargain, a specie prevalent in no mean amount and whose traits are not uncommonly present in all of us. ìThe customers come here with their minds made up. They want the best work, which we are happy to offer, but they do not want to spend the amount that equals the service, even though our rates are already quite low,î adds Amit Kumar of Shri Ram Arts.

This point they rally with ease, illustrations brought up to the task ìIt being Aminabad they think there is always scope for more, or less rather, like this boy here “even as the boy continues to fight the bargain battle at Bansal’s. Though they handle it with humour it is a serious argument since ìThe rate is about the same as was in my father’s time”, says Swatantra Kesarwani but the blooming business makes up for the marginal loss they assert.

The absence of a parking area in the highly congested market place also affects sales tremendously. “The wealthier customers prefer to get their work done at other places, and are prepared to pay a much higher price for work which is of the best quality here only. Many prospective customers that could bring in good business are thus drawn away”.

But despite all this there is also a faithful, regular clientele that appreciates the work and rewards it accordingly. Happily for them the business continues to prosper “The best thing is it comes to us, we do not have to reach out. People know us and they come to us for work”. Larger orders from private businesses also serve them. “We received an order from Idea Company for 3000 frames to be delivered in ten days that were required to be distributed by them all across Uttar Pradesh. And they chose this one place; we were able to complete the entire order in a week only”, Kesarwani tells proudly. Efficiency, adaptability to the customer’s needs and a friendly outlook keeps them going.

It is like any other work, done to earn a living but what makes it meaningful Ravi Khanna describes in poetic terms “people come here and take these pictures with them. They decorate their households with them. These pictures and frames, they add beauty to bare walls; lending artistic depth to shallow places. We also play a part then in their happiness and enter their lives, their homes with our small work. Is it not a noble thing?” It definitely is.

So the next time you pass Tasveer wali gali make sure you take away a piece of its priceless gems for your home. And for each time its beauty inspires you or the divinity in the frame you feel has blessed you, remember where it came from. And direct due appreciation there! 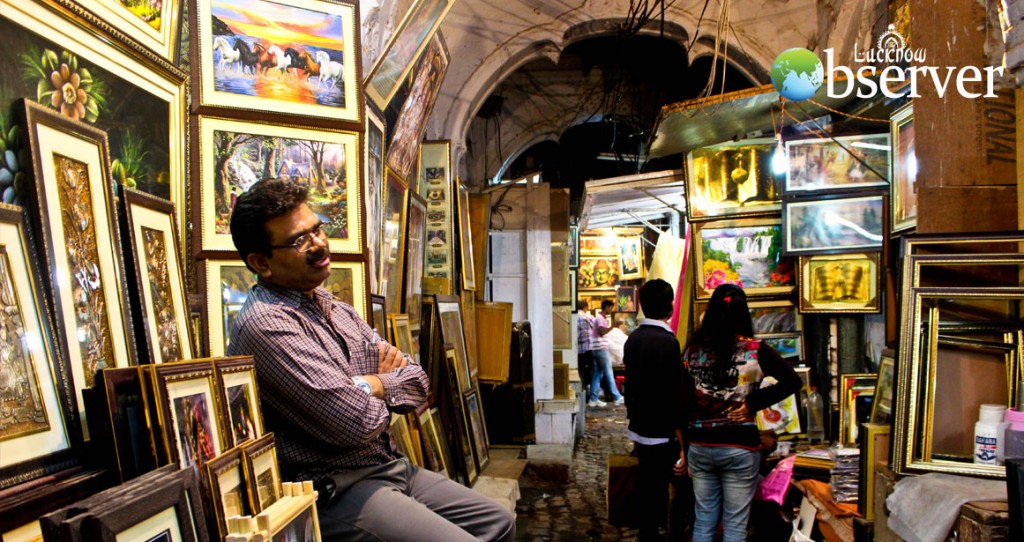