Mirza Mohammed Rafi Sauda from the 18th century is the greatest Urdu poet of the qasida, or the ode style. His ancestors were aristocrats from Kabul. Sauda was born in Delhi in a home around the Kabuli Darwaza that was destroyed in the 1857 war.

Mohammad Hussain Azad, Urdu poet and essayist who died in 1910 wrote that whenever poet Sheiḳh Ibrahim Zauq passed the Kabuli Darwaza, he spoke of the greatness of Sauda’s poetry and prayed for the peace of his soul.

Sauda was a student of Sulaiman Kuli Khan Widad and the celebrated poet Shah Hatim. Sauda originally wrote in Persian but on the insistence of Khan-e Arzoo, he began to write in Urdu. Incidentally, Khan-e Arzoo is an uncle of another great poet from the 18th century Meer Taqi Meer’s step-brother, Mohammad Hasan with whom Meer stayed for a while in Delhi.

The Mughal King Shah Alam ‘Aftab’ learnt the art of poetry from Sauda who had also made corrections to the royal verses. Sauda moved from Delhi and after a short sojourn at the court of Nawab Bangash Khan of Farrukhabad, he finally settled in Lucknow in 1772.

Here he was employed by Nawab Shuja-ud Daulah whose successor Nawab Asif-ud Daulah granted Sauda an annual stipend of Rs 6000 and conferred him with the title of Malak-ush Shuara or court poet. Soon Sauda met Richard Johnson, British Assistant Resident in Lucknow and a connoisseur of Urdu literature and who was gifted a manuscript of the poet’s collected verses just before Sauda died in 1781.

Sauda is buried at Lucknow’s Imambara Agha Baqar near the King George Medical College. Hakim Syed Aslah-ud Din Khan compiled Sauda’s complete work that was translated by Major Henry Court, Captain of Bengal Cavalry into English and who found Sauda a perfect master of various idioms of the Urdu language.

Claims Sauda that when his love songs are recited in the garden they make nightingales crazy. 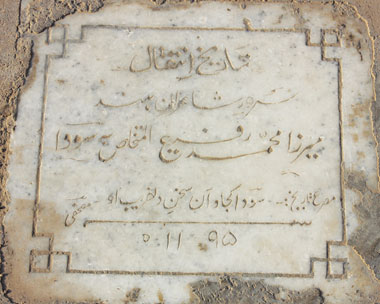 He added two varieties of composition, the qasida or laudatory ode and hijv or satire. He is regarded as the founder of the two forms and was the first to write a qasida in the present form and to bring it to a pitch of perfection that is rarely achieved by later writers. His satires are full of fire and wit and evoke a fund of merriment and laughter. He was the first to take up satire seriously and to systematically make it a weapon of great strength and power.

The soundest rock on which Sauda’s reputation rests today are his satires. Critics say this about Sauda’s satires:

His fieriness and the sharp swiftness of his temperament had the effect of lightning—and a force that no reward could extinguish, and no danger could suppress…Then, closing the eyes of modesty and opening the mouth of shamelessness, he said such wild things that even Satan would ask for a truce.

His satires display his command over the language and his wide and profound knowledge of various crafts and professions. One of the favourite targets of Sauda’s satire was a gentleman called Mir Zahik, father of Sauda’s contemporary and well-known poet, Mir Hasan.
Sauda had loved to play practical jokes on him.

Sauda’s great command of language allow his words to move freely in swinging motion. Sauda’s poetry is compact, forceful and eloquent. He introduced new metres from Persian into Urdu with new rhymes and new radeef, or double entendre. His compositions are filled with surprising skill and talent and continue to be the delight and marvel of the present age.

He broke the harshness of some Hindi words by introducing softer tones of Persian vocabulary. It was pre-eminently Sauda who along with Meer Taqi Meer upheld the dignity of Urdu, raised its prestige to string out new melodies from it. Sauda imported Persian turns of expression, constructions, metaphors, similes, allusions, idioms with abandon and wove them dexterously and harmoniously into the texture of Urdu thus widening its range and making the language flexible and capable of being wielded for any purpose. His services to the language and his mastery over it were recognized by his contemporaries and later by writers such as Mushafi and Insha.

Not only was Sauda a very great poet of great powers but he was a great influence and kindled the fire of poetry in many a breast. He was master to many youthful writers. Ghalib, one of the brightest stars in the firmament of Urdu poetry pays homage to Sauda. Zauq modeled his ghazals and qasidas on those of Sauda, and always admired him. Meer Taqi Meer writes:

Sauda, a young man with pleasant manners and good temper, warm hearted, jovial and sociable, of cheery disposition. He writes extremely well – ghazals, qasidas, masnavis, qitas, mukhammas (a poem consisting of stanzas of five lines each) and rubai. He is the head of Urdu poets.

If Sauda can be compared to anyone, it is Anwari, who is the lord of idiom and language, and the king of ode and satire.