A Community Which Paints the Society Turns Colourless

Rangrez is a Persian word, which means dyer, or in general terms a painter. They are different from other painters as they are not the one who paints on canvas or walls but rather cloths, environment and soul.

Rangrez or Sabbag is a part of Sunni-Muslim community present mostly in the northern part of India. Although majority migrated to Pakistan during and after the partition, but a major of them remained in India. They are mostly present in Uttar Pradesh, Bihar, Madhya Pradesh, West Bengal, Rajasthan and Delhi. They are important to our culture and society. During the British period the majority of the community members were in Rajasthan, but because of lack of water in the region, they migrated to other parts particularly West Bengal and Uttar Pradesh. Even today their presence can be felt at the ghats of almost all the big rivers. They have special connection with Ghats.

The population of this community is majorly spread into three nations in the world-India, Pakistan and Bangladesh. Out of the three, India has the highest number of people belonging to them. The total world population of the community is 383200, out of which 316000 are in India. This means more than 80 per cent of the world’s population of Rangrez is in India. Uttar Pradesh with 212,000 Rangrez is the largest inhabitant for the community in India and world. With majorly staying in India for centuries, their language is similar to that of locals along with Urdu.

In India, castes are mostly profession based and there is a particular profession for each and every caste. To put this community into the same system, we can say that they are a community which earns its living by dying clothes. With the change in technology and modernization, the community is involved in various others things also, but the condition remains the same.

The community can be further divided into Lalgarh, Nilgarh and Chhipi. These categories are also based on occupations. Chhipi is at the lowest position and works as the one who dye and prints the cloth, where as Lalgarh and Nilgarh mostly prepare colours.

Bollywood has always given special importance to the community and their work of adding colours. There are many songs which talk about their work and its importance. They not only add colour to cloth, but also to our lives.The beauty of the community is shown to some extent in the song Rangrez from the movie Tanu weds Manu. The song also show parts of old Lucknow where the community is present at a large number.

The community is mostly governed by Muslim rules, but some members, in some parts,live more like Hindus than Muslim. Some believe themselves to be the descendants of Khwaja Bali, a Sufi saint from Kabul. The following verse explains the connection between the two:

To put this in simple terms, Khwaja Bali, who is a rangrez, dyes the bed of God. The word Rangrez is made up of two parts- rang and rez. Rang means colour and rez is to pour.

Although there are Hindu dyers also, but the work of rangrez is considered superior. They are not just the dyers of cloth, but also a strong link between the two communities- Hindus and Muslims. The world may feel that the two communities are against each other, but even today Brahmans and other castes of Hindus like Marwari Banias and Rajputs prefers clothes dyed in yellow from a rangrez for their marriages. 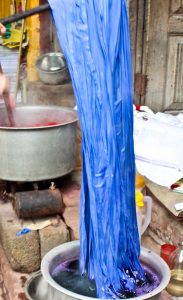 Ahmad (70), a member of the community, recalls from his memory, “During my young days, there used to be long waiting queue for the dress to be coloured. Different castes had different peak periods. During Eid and Ramzan, the demand was high for green colour whereas during sahalag (marriage period) the demands were high for red and yellow colours. People from all class and all age group were our customers. Now the things have changed, youngsters don’t have time to wait to see a colourless dress turning into a colourful piece.”

Rangrez, part of the Other Backward Castes, is fighting for their existence. Most of them are landless, although in some parts they are powerful and rich. They use natural colours which are not harmful for the skin. The only problem with these colours is that they cannot stand washing and loses its shine after wash. This, with the arrival of cheap imported chemical dyes is a good solution, but has proved as a major reason for the trouble of this community. The chemicals are in the form of powder and can be used by anyone easily. The powders are cheaper as compared to natural colours. The community which actually adds colour to the society is now suffering from the effects of the imported, cheap chemical colours.

The beautiful art of dyeing is actually being killed by these imports. Even today, a large part of the community depends on the colouring of the cloth to earn their livelihood. The community is not highly educated to solve its problems through education. Only few are educated enough to get a living out of education. Slowly the members of the community are leaving the profession and going for other unskilled works. Some are working as a labour, and some as rickshaw pullers. The situation is most common with younger generation.

The community is not earning much with this profession as most of the dyeing is happening in factories and with the harmful chemicals. But many families are still into the same profession with hope and courage. It is only because of them that even the present generation is able to see a colourless dress or cloth piece being coloured. Although it is not a common sight nowadays, but many parts of the city still have a man with a tub of coloured water putting a colourless cloth into the water and making it colourful.

The community earn their living by making money out of water with little dye added to it. For most families it is a joint work. Most of the members are involved in this only. Women also take part in this profession unlike many others which does not allow women to be involved.

Monis (55), a dyer from old part of the city said “There was a time when the orders we got, were enough to live a stable life. But now, all are suffering because people prefer cheap synthetic dyes. They stay longer and the colour does not fade away with washing. The uses of such dyes are harmful for human skin and we do not use it because from generations we are working to give safe wearables to people.”

Echoing him, Aadil (45) a middle aged dyer adds, “From generations we have been adding colours to people’s life. Suddenly with people’s interest into industrial coloured clothes, the colour from our own life is missing. The companies use machines to colour the cloth, but we do the same manually. We don’t know anything else, this is our only earning. Where will we go to learn a new job now at this stage? At least there should be learning workshop for the old masters, so that they can adopt the new form of technologies.”

They are the one who are suffering because of the technology and cheap imports. The government should protect them from turning towards a colourless life. From generations, they have been adding colours to our lives and society. They are the mark of cultural and social unity- from rich to poor, upper caste to lower caste, they adds colour to everyone’s life. They are a very important part of our culture. There should be a proper training for them, so that they can adopt the new technology. They can be protected in many other ways. This will not only help the community, but will also give a new colour to our old cloths. So from next time onwards, if you feel bored of the colour of you dress feels the colour is faded, look for a rangrez and add a new colour to your dress as well as their life.

Nivedita Singh
The writer is a student and is passionate about music culture and literature.