Lucknow is a city which celebrates the festivals of all the religion with special enthusiasm. The most special part of Lucknow is that people from all religions takes part in the celebration. One can find Hindu celebrating Eid, and Muslims can also be seen in temples during Hindu festival.

Janmashtmi, or birthday of Lord Krishna, is celebrated worldwide. Lucknow in no form is an exception. The city is flooded with temples both big and small, and all have a unique style of celebrating the birth of lord Krishna in their own way. Some temples are elaborately decorated with strings of colourful lights and flowers; many display various stages of Lord Krishna’s life. Many go for kirtan and many others ways are also common.

The spirit of the festival is visible in the markets. Decorative items and idols are readily available in almost all the major markets of the city. Dress of lord Krishna is also available in various size and shape along with his jhula and bansuri. 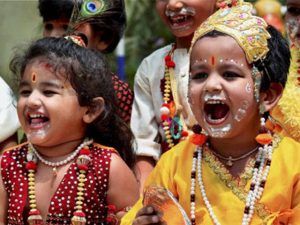 The trend of celebrating each other’s festival is not new in the city. Hindus and Muslims used to celebrate each other’s festivals without any restriction. The tazia was an object of respect among the Hindus, and in the same way Janmashtami jhanki is a respectful thing among Muslims. For those who were close to Wajid Ali Shah, there was no escape. The Hindus who were in direct contact with nawab used to spend lots of time, energy and money on Muslim celebrations and mourning while the king and the Muslim ministers used to participate freely in the Hindu festivals.

Lord Krishna’s penchant for dance is world is so popular that even Nawab Wajid Ali Shah was his fan. Before Shah’s time, the dance form was limited only to the temples, and ladies performed Krishn-leela to worship Krishna. When Shah saw this, he promoted this dance form and made it available for common man as well. The dedication of Nawab Wajid Ali Shah towards lord Krishna is also known to everyone.

Wajid Ali Shah composed numerous songs on Krishna in the language, which is mixture of Awadhi, Raja Bhasha and Khari Boli. He prepared a ballet known as “Rahas” based on the traditional love story of Radha and Lord Krishna. It is said that the Mukut crest of Lord Krishna was prepared at the cost for one lakh rupees during the Janmashtmi. 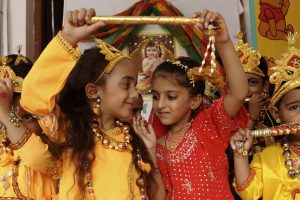 The connection of the Muslims of Uttar Pradesh with Hindu Lord is close. It may be amusing, but Muslims in UP have a strong bonding with Hindu lords. Comparison of a child with lord Krishna is as common in a Muslim household as in a Hindu’s. Poet, lyricist and scriptwriter Javed Akhtar in an interview published in The Big Bookshelf: Sunil Sethi in Conversation with Thirty Famous Authors, told Sunil Sethithat right from the time of Nawab Wajid Ali Shah, Janmashtami has been a major happening in this part of the country. He also shared an incident where Lakshmikant Pyarelal doubted him to be able to write a Krishna aarti, because his name is Javed Akhtar, but within 24 hours he came up with an aarti. He said he was able to do that because he was brought up in an atmosphere where he saw Krishna Leela and Krishna folk songs.

Even during the time of Muhammad Ali Shah, the Muslims used to take part in Diwali and Dussehra celebrations. There were numerous instances recorded in King’s Diary of the his orders for setting free a number of prisoners on the auspicious occasion of Diwali and himself participating in the Dussehra procession asking the heir-apparent and other members of the royal household to watch it.

Different families and communities also have different beliefs regarding the celebration. Some show their dedication by fasting for a day, while some observe two days fasting. The main celebration begins at midnight. Lord Krishna’s idol is put in decorated little cradles which devotees rock amid chanting of bhajans and blowing of conch shells. Lucknow has another special connection with Krishna, as it is believed to be land of Lakshman, who later incarnated as Balram, Krishna’s elder brother.

At majority of places, the festival is a two-day affair. Some begin the celebration after the midnight, when the lord is said to have born. Some celebrate it one day before the birth. One of the most common practices during this time is rasa leela, the dramatic enactments of Krishna’s life. The two major attractions for the celebration are the Reserve Police Lines and the ISKCON Temple.

Eighth son of Devaki and Vasudeva, Krishna was born on the ashtami or the eight day of Krishna Paksh or the dark fortnight of the Bhadrapad, Hindi month. Krishna is believed to be born at midnight some 5000 years back in Dwapar Yug. Born in Mathura and brought up in Vrindavan, his idol is washed and cleaned with water and milk to abhishek and welcome him. Reading of the Bhagavad Gita is also part of the celebration.

One of the most vital and crucial aspect of the festival is Janmashtami jhankis or Janmashtami tableaux. It makes the celebration more exciting. Jhanki means to look into the past and through these, we look back into the life of the lord- his childhood, boyhood, his relationship with Radha, or Gopis, and other major parts of his life. The birth and his childhood or the Bal Gopal phase is one of the most common things to see in the jhanki. Other major parts of his life include- killing of Kaliya Naga, Kansa Vadha, or the lifting of the Govardhan Parvat or Mount Govardhan.

Jhankis are the miniature representation of a village made of clay where the humans are represented by dolls, or humans. They are beautifully clad with embroidered lehangas, dhotis and kurtas. In the evening, streets are filled with children and people in order to get the glimpse of these jhankis. Illuminated by colored lights and decked up with flowers, the human Jhankis as well as doll Jhankis look really amazing and wonderful.

Like almost all the Hindu festival, food is a major part of this celebration as well. Krishna is offered with Chappan Bhog (56 different dishes). These dishes are distributed among the devotee to break their fast. to 12-capitalise all the names of the food items makhan samosa, gur ka paara, singhare ki poori, coconut barfi, kesar shrikhand, kaju cake, apple and almond halwa, makhaane ki kheer, makkhan mishri, kalakand, pede, cashew kheer are the few to count.

Which means in order to deliver the pious and to annihilate the miscreants, as well as to re-establish the principles of religion, I advent Myself millennium after millennium.

Nivedita Singh
The writer is a student and is passionate about music culture and literature.