A Trip to the ‘Mango Capital’ 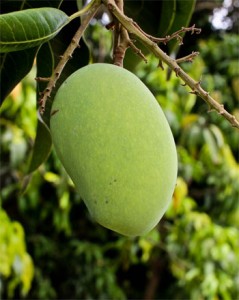 The narrow, freshly tarred road glistens in the afternoon heat. The grandeur of old Lucknow is behind us. The magnificent Bara Imambara, the imposing Rumi Darwaza, and the splendor of numerous mosques give way to run-down houses and empty sabzi mandis, ghostly echoes of the early morning frenzy. Up ahead, beyond a roundabout, the road disappears into the shade of rows of the mango trees that border it on both sides. The sweet smell of the raw fruit is thick in the air. This is the renowned mango belt of Malihabad, just 25 km away from the capital of Uttar Pradesh (UP), Lucknow.

The largest of 14 mango belts in UP, Malihabad has 30,000 hectares of land under cultivation. Last year, it accounted for nearly 12.5 per cent of the mangoes produced from UP, the second largest mango producing state in India after Andhra Pradesh.

For the preservation of endangered varieties, Central Institute of Subtropical Horticulture has taken up an initiative to bring a group of horticulturalists together and tell them about these varieties. Under the first phase of this campaign that started in 2010, about 3000 plants of endangered species were cultivated and distributed to the farmers for free. This agenda has seen magical results. In 4 villages of the region, 542 farmers are now associated with ‘Mango Diversity Preservation Society’. With their efforts, new generations are now enjoying the flavors of these unique varieties of mangoes. 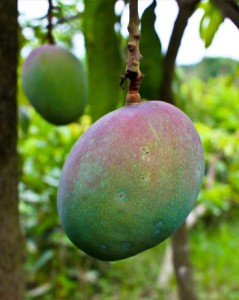 The campaign from the institute aims at rejuvenating almost 750 endangered species of mangoes. Under this campaign, besides being given free plants of endangered species, the farmers are also trained in modern techniques for taking care of them. Every year, the Institute organizes Mango Festival in various parts of the country so that the farmers can directly sell mangoes to the customer, and not only earn higher proifts but also live a happier life.

Apart from Mohammad Nagar Taluqdar and Kasmandi Kala, this campaign for the conservation of mangoes also includes farmers from Sarsanda and Gopramau of Kakori Block. Here, farmers like Ram Kishore, Mohd. Shaadab, Mahesh Kumar, Siyaram, Saud Ahmed, Eijaz-ul Ahmad, Mohd. Tariq, Naeem Ahmed, Jamal Ahmed and many others, along with their families are set on a mission to protect and preserve the endangered species of mangoes.

Pakistan’s famous Rataul is also one of Malihabad’s attractions. Though its origin is believed to be Rataul village of Khekada tehsil in western Uttar Pradesh, its cultivator Eijaz-ul Hasan says that his ancestors brought this plant from Pakistan. Its taste is unparalleled. No one can resist the addiction once they taste it.

Dashehari: One of the most popular variety of north India, it is a mid-season mango. Fruits are medium sized, with pleasant flavour, sweet, firm and fibreless pulp. Stone is thin and keeping quality good.

Chausa: Late- maturing variety of mangoes, it matures during July or beginning of August. Fruits are large, weighing about 350g each. Fruits are bright yellow with soft and sweet pulp. It is shy bearing.

Langra: An important commercial mango variety of north India, it is biennial- bearer and a mid season variety, with good quality fruits. Flesh is rm, lemon yellow in color and scarcely fibrous. It has characteristic turpentine flavour. Keeping quality is medium.

Lakhnaua Safeda: For the one, who loves the juicy syrupy fruit instead of the pulpy one, can find no better variety than this.

Munzar Aamin: The variety is generally produced by the end of the season and appears almost round in size instead of the regular shape of a mango. It can be relished both by sipping the juice and by cutting it into slices and chomping the thick pulpy fruit.

Nazeer Pasand: These varieties of mangoes are not at all fibril and can be found by the time of the season when Dashehari starts disappearing from the market.

Japani Lakhnaua: The variety representing the blend of two countries and unity among them is named after the shape of the tree and its bracts. What makes it different from the other varieties is its palatableness, which is not only sweet but starts getting sour as one reaches toward the dorsal of the fruit.

Kaccha Meetha: This unique variety of mangoes are rare to find and are known for their sweet taste even when they are raw and ripe.

Paan: As the name suggests the fruit is in shape of a ‘paan’ with mushy yellow pulp. As compared to the look it weighs heavier and each fruit is of approximately half a kg.

Ramkela: These are special mango variety, which is only used to make pickle. It does not get ripe and remains sour throughout. To get these, you have to wait until end of July when they are at their best to be pickled.

Kala Pahad: Abhorrent in looks, this variety of mangoes tastes in three different avors at the same time which disparate it among all other varieties of mangoes.

Jauhari Safeda: The variety makes it presence even before the Dashehari in the market and can be found even after the season ends for Dashehari. 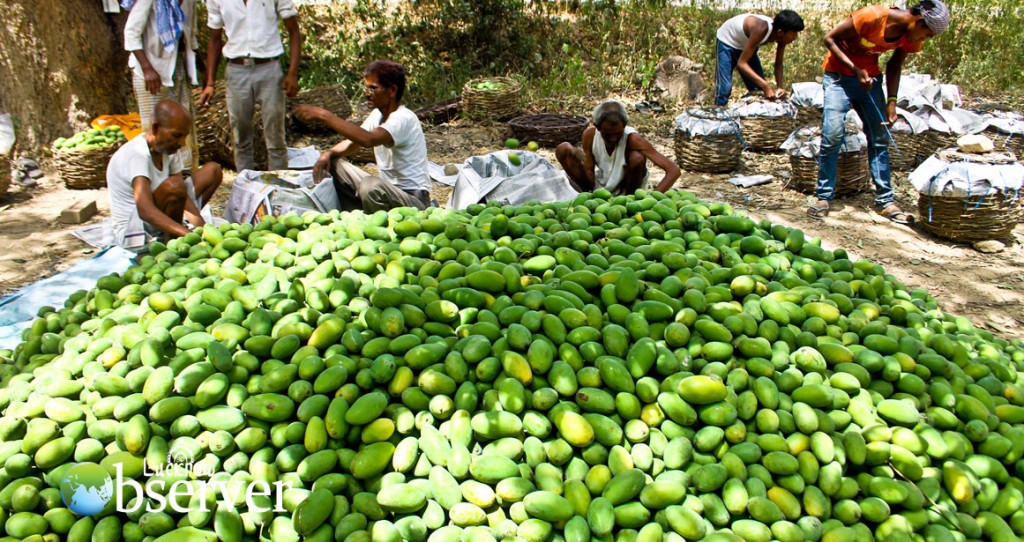 From the very beginning of the time, mangoes had the enticement to make people its admirer. Where the common people could not say much, the poets left no stone unturned to praise the fruit. While being in Malihabad if one tries to remember mangoes or Josh Malihabadi, the other comes in mind naturally. Being in the same conflict of thoughts, poet Raja Mehdi Ali Khan writes:

Josh Malihabadi’s grandson Asmat Malihabdi, a writer and an educationist by profession says ‘Jauhari Safeda’ is one of the most famous and known varieties to be found among the various varieties of mangoes from Malihabad. Narrating the history he says “While in Lucknow, once Fakir Mohammad Khan ‘Goya’ sent this variety of mangoes to Nawab Naseer-Ud- Din Haider. Nasser-Ud-Din Haider was so enthralled with its taste, that in return he sent back the crates full of jewels which he received full of mangoes. After which the variety came to be known as ‘Jauhari Safeda’. Another variety of mango that he names to be famous in Malihabad is ‘Shamsur Asmar’, which is extremely gleamy and glossy in looks and its pulp is as smooth as butter”. Losing himself into the memories of past, Dr. Asmat Malihabadi says, “Josh Malihabadi’s doggerels often had a mention of either mangoes or Malihabad.” While leaving Malihabad he wrote:

The well-known poet Firaq Gorakhpuri too was extremely fond of mangoes. He once met a Pakistani poet in a mushaira and during their conversation came a mention of fruits. The poet said, “In our land, pomegranate is are really wonderful. Do you have a fruit of same charm as pomegranate in your land?” Firaq replied, “Mango.” He then skipped to grapes to which Firaq again replied- Mango. The Pakistani poet then recounted a number of fruits, to which Firaq had the same reply, ‘mango’. Irritated, the poet from our neighbor nation asked if Firaq had no other fruit except mango in his country. Firaq replied coolly, “Have patience. Let me finish with the varieties of mango first. Then I shall come on to the next fruit.”

Akansha
Writer is a student, an aspiring painter & calligrapher 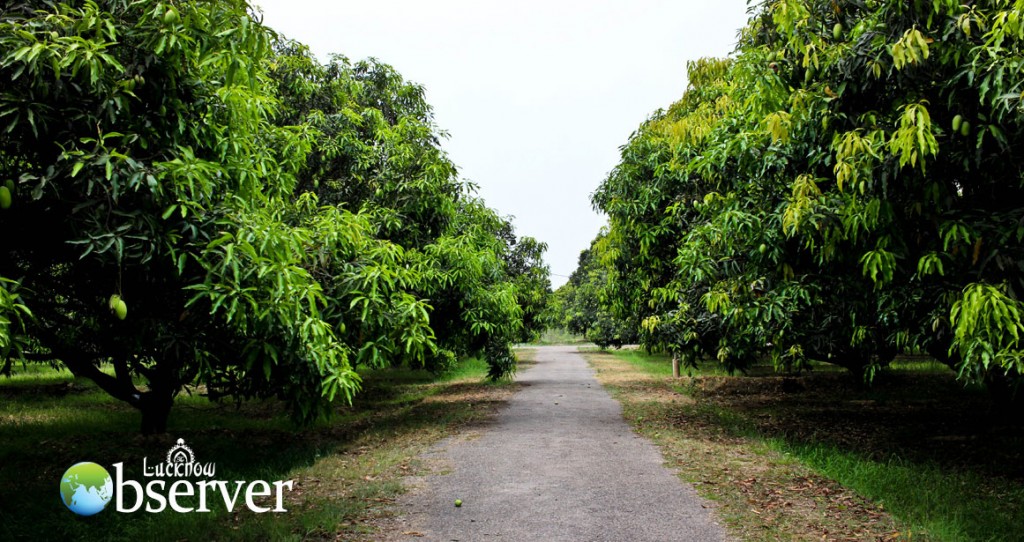