Whenever anybody talks or write about Asifi Imambara or Bara Imambara, he defines the premises, boundaries, or nearby locations that there is a grand hall with vault slab, Bhool Bhulaiyan, Baoli, the side rooms called Sahenchian, the beautiful Mosque, two big gates on different levels, Naqqarkhana in front of the first gate and of course the Roomi Darwaza. Nobody talks about an important building called Musafirkhana, located between Roomi Darwaza and the first gate of Asifi Imambara within its premises.

The building of Musafirkhana is, now, non existent but its north side gate is still existing with a rampant wall with its both sides starting from extreme corners of Imambara to Roomi Darwaza side rooms. The construction of Imambara main building was completed in 1789 and the work on two gates was in progress. Impressed by the fancy finishing work of its main vaulted hall, Asif-ud-Daula invited many interior decoration experts including Dr. Bullion from Belgium. Though the decoration started unsystematically, it soon became on the track after Asif-ud-Daula himself visited the site several times. According to Mirza Abu Talib Isfahani, who had been an employee of the Nawab prior to switching over his loyalty with the Company Bahadur, the two big halls were full of different kinds of chandeliers, hangings and groundies, glass balls and decorated pots and that there was no room for a person to move from here to there when the cleaning was required. There were fourteen epitaphs of silver with emeralds fitting in it in the main hall, and many chandeliers standing on the ground. The halls were fully packed and shining.

It was decided in 1789, that there must be a guest house (Musafirkhana), for the persons who visited Imambara, to stay at a proper place. The policy implementation of the ruling class that more and more people, not only from Lucknow but also from outside and Europe should visit the place, motivated them for construction of a Musafirkhana also. Akbar, the Moghal Emperor had constructed Aaram Bagh on the banks of river Yamuna in Akbarabad (Agra) as the resting place for visitors. Nawab Wazir had been towing the same social and political line.

Musafirkhana was a four storey building of lakhori bricks of the same kind that were used in the construction of Imambara. Taking total synonimity with the architecture of Imambara, the arched openings of each room had been carved as cusp of semi-circular moon with columns of camrikhi design. Each room was connected with the other with these types of openings. Entry in the Musafirkhana was from the gate near Roomi Darwaza. This gate still exists and has been taken care of by ASI.

There were eight big rooms on each floor and historians were also of the view that there was a small pond in the centre for visitors’ use. Every room was supplied with an earthen pot of drinking water, put in a decent style covered by earthen plate, floor bed for two persons and two warm quilts for night, if it gets cold. During Muharram, special treatments were meted out to the visitors with both lunch and dinner being served (non spicy food). They were not allowed to enter the Imambara with their shoes on. A European described a scene when he was here during Muharram.

“I am on the third floor of the temporary stay house and can see the decoration of the Emamberah (Imambara), the mourning place of Indians specially Muslims. Most of the gathering moving around have taken off their shoes, and are trying to touch the floor of the epitaph with bowed heads and swinging hands. The Emamberah is beautifully decorated with thousands of lamps and chandeliers.”

The statement makes it clear that the Musafirkhana was open for all types of visitors. Tourists generally stayed here for a few hours or by night for taking rest and preparing themselves for a visit to their desired destination.

The Indian sepoys made Musafirkhana their hiding place from where they attacked British forces several times during the First War of Independence in 1857. It was identified as the place of rebellions by the Company forces. Two or three guns were recovered after second relief operation in the month of March, 1858. Heavy Artillery was fired on the Imambara building and Musafirkhana, while the force was passing by on the road in front of Imambara. Much of the Musafirkhana building was destroyed by this firing. After the full control of British, they declared the whole of the area as the Nuzool Property ( the property of the government). Like other royal buildings, this building was also left to the cruel hands of time. As the time passed, the rest of the portion also razed to the ground due to absence and negligence of the persons who were supposed to take care of it. The precious and worthy items from Imambara were looted and there did not remain even the gold lines of the walls of Imambara.

There left only the ruins of the building. These ruins were covered with the thick layer of earth and mud which were left after the fury of floods in 1923 and now has been used, for last several decades, as the cultivation ground of rose and other flowers.

The building foundation still exists under the garb of thick earth layer. The experts of preservation of archaeological sites and remains all over the world have been focusing on the restoration of much talked about monuments and sites. Though this trend is getting more attention in Europe and South Asian nations, India is rather slow on this line. Few examples are available with the ASI. A disfigured and de shaped temple was restored in Kanpur dehat, and a temple in Madhya Pradesh relived his life with the courtesy of ASI. Lucknow Residency main building was reinstated in old design and shape, and a war museum in memory of 1857revolt is established here.

Similarly Musafirkhana can also be restored with the help of old map. Sample of old material are to be taken and tested. For good bonding of new material with the old one, which still exists in the foundation, the strength of the old material is to be tested and a new combination of mortar is to be evolved. Though the old building was constructed using natural polymers, which is not possible now, the new combination is in offing of the same strength as required. The four storey building can be reconstructed on the same existing layout plan. Confirming with the size of the lakhori bricks used in Imambara or Mosque and expectedly to be used in the Musafirkhana building, an estimated number of lakhori bricks may be calculated and any kiln can be ordered to supply the same in phases as and when required.

The composite plan of the project should be divided in different phases as per expectation of fund availability. A well thought plan of its restoration can earn popularity all over the world and a business complex, like Meena Bazar in Agra, for the shops/bazar of artefacts of Avadh can be established, that can also glorify the Avadh once again and can be a good tourist spot. 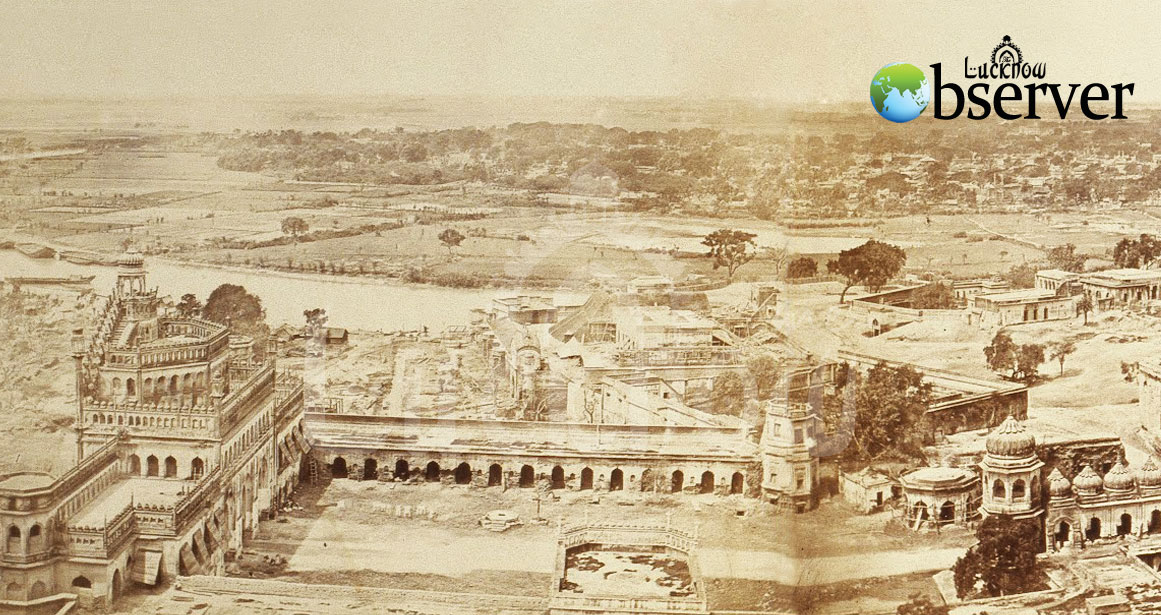