Ola and Jugnoo Dominate the Roads of Lucknow

Technology has made our lives easier. It has actually changed our lives and we are able to perform tasks in our daily easily. One technological development that has made our daily travelling very comfortable is the introduction of mobile applications for travelling.

Do you remember those not-so-good days of waiting for an auto-rickshaw or a taxi in the middle of busy Lucknow roads in the skin cracking sun? Those days are now gone because we have the availability of travel applications which will send taxi or auto rickshaw just next to your door. And then for cities like Lucknow where the sun is always there to accompany us, there is no reason for long waits for a taxi.

These applications have converted the travelling industry into a much more personal thing. Travel applications like Uber, Ola and Jugnoo have turned the old ride sharing thing into an entirely different industry. There are many benefits of using such travel applications. They are economical, provide better facilities and we get the vehicles easily. They provide the complete information about the vehicle you are booking for your travel journey in Lucknow. These apps can be easily downloaded from Play Store for android users while from Apple Store for iPhone users. Demographics statistics prove that travel and tourism are the seventh most downloaded application category. Some of the leading travel apps have started the option of online payment while booking the vehicle.

These applications have the flexibility for the drivers as well. For example, an Uber or an Ola cab driver can work as much or as little work they want to do. They can easily switch off or switch on their mobile taxi application according to their willingness of work. This is how the cab driver can fix his schedule of working.

They offer the customers some of the best end to end solutions for all the travel arrangements. In today’s world local travelling has become lame and very difficult without mobile apps in a place like Lucknow.

Ola is one of the most used travel application in the City of Nawabs. The rides are charged as per fares displayed in fare card of the day of the ride. Ola provides 4 types of vehicle services including: E-Rick, Mini, Sedan and Auto with charge Rs.8, Rs.15, Rs.16 and Rs.4 per km respectively when we talk about distance fare. Apart from the fare according to the distance, Ola also charges an additional fare of Rs.1 per minute for Ola Mini and Ola Sedan and Rs. 2 per minute for Ola Auto.

After the huge success of Ola in Lucknow, the city has now got a new public transport service for the people. This app is called “Jugnoo” and they provide you with quick auto rickshaw service with affordable prices. The best part in using this service is that you needn’t shake much of your wallet if use the auto rickshaw service. In this service people can easily book an auto rickshaw using the mobile application to reach their desired destination. The service is 24×7 available, anywhere in the city through mobile application. The rate of Jugnoo service is cheaper than other taxi providing applications. The standard rate is just Rs.3 per km, with a ride time charge of Re. 1 per minute. At night, night charges of kick in, which is still lower than the base price of the common fare charged by other autorickshaws. 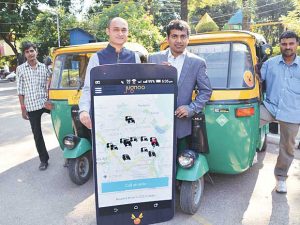 According to a recent survey by Association of Radio taxi India, there has been a subsequent growth of 20%-25% in the usage of online taxi apps in the past two years in the state of Uttar Pradesh. The taxi travel industry has seen a growth of 7.89% in the complete nation. There are many reasons behind the growth of such taxi providers in the nation. One reason is that people need not indulge in any of the haggle with the taxi/ auto-rickshaw drivers for the fares they are charging. Also these taxis pick you up from your homes and then drop you to your desired location. So you needn’t stand outside in sun to search a public transport. There is one psychological reason that why people are using Ola, Jugnoo or Uber. They think that they have used something that is modern, related to technology and this makes them perfect for the present modern and fast growing life. Because of this, these companies have become highly popular in cities like Mumbai, Lucknow, Delhi, Hyderabad, Chandigarh, Pune, Chennai and Kolkata.

Though the market of travel based apps is running with a successful note in India but some government policies have been proving a huge barrier in their roads to success and prosperity. Karnataka became the first state of the nation to stop the surge pricing by these app-based operators. After this, the Delhi chief minister Arvind Kejriwal warned these aggregators against the surge pricing. In April 2016, Delhi government announced that they will soon be coming out with a new policy according to which the cab companies running in the capital will be bound to charge the fare from the people in accordance with the decided fares by the transport department. Also since Ola and Uber were not registered with the transport department and were still running their vehicles in the national capital, the government asked them to take a license to operate their taxis.

Traditional radio cabs and local taxi drivers have actually faced a lot of problems after the coming of Ola and Jugnoo services in the city. It has become difficult for them to match up these taxi providing companies. Now, people book their taxis from home and they avoid using the local taxis or auto-rickshaws which has caused these people huge losses. These days Ola, Uber, Jugnoo are dominating the roads and the local taxis and auto- rickshaws are somewhere left behind. These have made the travel journey much easier and comfortable for the people but on the other hand they have made conditions tougher for the local taxi and auto- rickshaw drivers.

The city traditionally followed the system of sharing the auto wherein the auto driver charged a fixed fare per passenger. This helped people opt for cheaper transport options. This also increased the income of the driver as he could have multiple riders at different points along his route. The applications that have become popular generally follow the concept of booking the entire autorickshaw for the ride. Not only is it costlier for a single passenger, it also reduces the income of the driver to a certain extent. As a shared vehicle operator, he had the option of choosing his route and the fare, along with the number of passengers for the trip.

Another problem that the drivers are facing is of operating the mobile phones given to them to facilitate this service. Initially, they are not very familiar with the options and have to ask the passengers to help them some times. They also prefer the cash option rather than the online payment ones. A driver that a friend rode with told him that it takes 3-4 days for the money to arrive in his account and sometimes even more, which causes a level of discomfort.

The traditional taxi operators have also felt the heat of these mobile applications gathering pace in the city. Before the launch of the application services, these taxi operators offered hourly packages to customers and charged return fares for all the trips. Even for shorter trips, the customer had to pay for the to and fro costs. With the introduction of the concept of pay-as-you-go by companies such as Ola have hit the services of these companies. Even people, who have to go for longer trips, use these cabs instead of the traditional taxi services.

Like a coin has two sides, the usage of such apps has some cons also. The basic demerit is of surge pricing by the cabs drivers. Though the government is planning out some laws against it and they have warned the companies too, but nothing much improvement has shown till date. Trip cancellations by the taxi or auto-rickshaw drivers cause problems for the passengers. Safety issues have also risen in some of the prominent cities of the country with various instances being identified from across the countries. The safety concern is on both sides of the table-the riders and the drivers. Though the aggregators have introduced a slew of measures such as GPS tracking, background verification, panic buttons etc., but there is still a gap that needs to be filled.

We need to accept the fact that there is a scope of travel based apps in Lucknow and the entire nation and they can provide you with the best facilities. It doesn’t matter where you want to go- Gomti Nagar, Indira Nagar or Hazratganj- These applications will make your journey easier and comfortable.