A Lifeline That Needs a Recovery

Education is the backbone of a civil society. To ensure a better future, we need to make sure that the citizens of tomorrow get the best education and a good environment to study. Lucknow has a number of world-class institutions that offer the best-in-class education and a wholesome development of the student. The City Montessori School, the La Martniere College, and others are some of the oldest and one of the best institutions in the country.

Founded in 1862 as a tiny school in the Hussainabad area of the old city of Lucknow, the Centennial Intermediate College has a long and proud history. Rev. J. H. Messmore, a pioneer educationist missionary in Lucknow, established the Hussainabad School House. It was later shifted to Inayat Bagh, now a part of college campus, and was raised to the level of High School in 1882.In 1877 and 1888, the Centennial School (which was raised to High School in 1882) and Reid Christian Intermediate College were established respectively. In 1889 the college was allowed to start degree classes in Arts and Science. 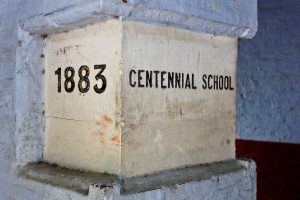 Keeping in view the need of the professional courses, Teachers’ Training College was established in 1932 and, in the same year, under the leadership of Mr. E. W. Ted Mumby, a pioneer of Physical Education in Northern India, the College of Physical Education was established. Till 1921 the degree classes, which began in 1889, were affiliated to the University of Calcutta. And it was only in the year 1922, when Lucknow University came into existence, that the degree classes were transferred to the Canning College of Lucknow University.

Ever since the project for a college was mooted in 1866, an extensive building work was undertaken. The Reid Hall was erected in 1891 while the Fairfield Hall and Badley Block were built in 1912 and 1921, respectively. To cater to the needs of resident scholars the Osmon Caldwell Hostel was constructed in 1908, followed by the Charles Lysander Bare Hostel in 1915. However, presently accommodation is provided to outstation candidates admitted to the following professional courses only (D.P.Ed./ B.P.Ed./M.P.Ed.(Final year) & B.Ed.). However Church sponsored candidates (outstation candidates only) admitted in any faculty of the College may be considered for Hostel accommodation. A beautiful Chapel was constructed in 1952 and was dedicated to the memory of Bishop Chitambar, the first Indian Principal of the Christian College.

In 1962, the year of the centenary of the college, the Mathews Hall, which houses the college library and the administrative offices, was completed. The foundation of the Centenary Social Centre was laid in 1962 to commemorate the historic occasion. This was completed in 1966.

A number of residential staff adds to the family atmosphere of the college. The school with its beautiful locale offers easy accessibility to Lucknow City Station and Qaiserbagh Bus Stand.

The school is government aided institution till class 10th, having the total strength of around 600- 700 students including intermediate section which is a self financed course run by the college with the least fees structure possible.

The school has 14 regular faculties for the students till class 10th and 8 private faculties for intermediate students. The school also has some imminent personalities as alumni such as the Minister in the Uttar Pradesh Government, Shree Ravi Das Mehrotra, Justice Bhalla and there are many more names who have studied here. The school also had a number of renowned faculties such as Pandit M. D. Sharma, Mirza Ali Raza, and A. J. Shah Bishop.

But an important institution such as Centennial is facing severe neglect. The building of the school not only needs attention as because it is one oldest school in Lucknow, but because the school is working as a lifeline for the community living around the school building that is extremely poor and not even able to avail basic education.

The school has different labs for different subjects that also include computers but the computer lab is not very well equipped as there are only three computers for the whole school including the office as well as the student work. The Principal Mr. P. N. K. Dutt told the team of TLO that they want to make the students better but they do not get the required funds to run the school. They have also asked the government to release the budget to maintain a computer lab for the students, but their demands were not met yet. 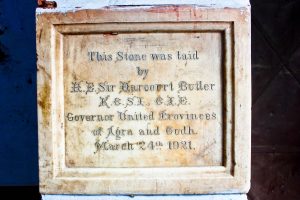 He also told us that Mr. Gupta is the oldest employee in the school premises who works part time in the school after his retirement to serve the students and society. Mr. Gupta has been working with the school authorities to make the school a government aided intermediate school since the time when he was a regular employee of the school, but till date there has been not much progress in it. The school is still running self financed intermediate classes, which has helped a number of students in the past years, but he says that the school is located in an area of Lucknow where people are not able to earn money so that they can pay the Rs 300 per month to make their children study.

Mr. Gupta told us that to compete the growing world of competition, the students, as well as the crumbling structure of the school needs financial support from the government to refurbish the infrastructure and advance the techniques of teaching through modern teaching aids such as Smart Classes, Computers and other modern technologies. This would surely help them to keep consecutive inheritance of teaching the deprived students and making our city a better place to survive in this world of restlessness.

The school authorities have tried to forward the proposal to the government to make the school government aided till class 12thmany times, but there has been no positive response. Initially, the school was only meant to educate the boys, but for the last few years the school has started co-education for the students till class VI.

It is sad to see that such an important institution faces apathy from the government. An educational institution that aims to give back to the society should be preserved rather than ignored. The government should listen to the changes made by the authorities and help the school change according to the times so that it can continue contributing to the society. With the mix of modern technology and traditional values, the school can help the students develop completely in all aspects of their life.

Kapil Pal
Writer is a student of Law and active Social Worker.