Over a Century of Delivering Excellence

When in 1862, Rev. J.H. Messmore, a Pioneer Educationist Missionary in Lucknow, laid the foundation of a tiny school called Hussainabad School House, no one knew that out of it would be born one of the best colleges in Lucknow.

Later when the school was to be expanded to a college, there arose a need for more land. Concerned Missionaries of the school petitioned for unoccupied land in Gola Ganj area (on which Christian College stands today) to the Lt. Governor of Lucknow around 1888, who rejected it in the hope of getting a medical college built on the land instead. Unfortunately, for the Lt. Governor and fortunately for the Missionaries, the authorities of the medical college, earlier interested in building a campus over the land, did not ultimately find it suitable to do so. Finally it gave way to the construction of the grand building of Lucknow Christian College. The area is said to be as big as Residency.

The very foundation of Christian College is based on tenets of Christianity that arise from the teachings of Jesus Christ. Even though it appears to be Christian outwardly and does give some quota during admissions to Christian students, the college boasts of a secular atmosphere among students and the teaching faculty.

The college has a department for moral education that ìtakes everything good from every religion, as the motive is to equip students with more than just education. “The faculty is of the belief that it is knowledge and wisdom that matters the most in the world.” An educated person is good, however an education that is combined with moral awareness, is a cherry on the cake.î The college strives on the motto: “Omnia Ad Dei Gloriam” that means “All in the Glory of God”. Every Tuesday and Friday Chapel service is held to give the students a weekly dose of spirituality. The Principal, Dr. E.G. Timothy, says that it keeps them encouraged and active and it acts as a meditation exercise at the same time.

Made of red stone, the college got its handsome looks due to well thought-out plan of the concerned British officials. Though the college was constructed in British times, the architectural design is significantly influenced by traditional Awadhi architecture. Dome like structures with hints of English archways and naqqashi of bold petal like design betray its inspiration. Noticeably, older Awadhi structures acted as the muse to the creators of this building. Surely the idea behind its design was to have it camouflaged with the other older structures, so that it seems like an extension of those. However, more than a century has weighed down the beautiful structure of the college. Face lifting and renovation of parts eroded by time and winds, is going on to make it look the way it was meant to. The authorities are trying their best for it to look closer to its old sepia photographs, for the rustier it looks, the more nostalgic one can get.

The building started expanding with Reid Hall which was erected in 1891. Other blocks like Fairfield Hall and Bradley Block were built in 1912 and 1921 respectively.

As students were increasingly coming from different places to Lucknow to take admission in the college, Osmon Caldwell Hostel was constructed in 1908 for their convenience, followed by the Charles Lysander Bare Hostel in 1915. Presently only those outstation candidates are accommodated who are pursuing D.P.Ed./B.P.Ed./M.P.Ed. (Final year) & B.Ed. Church sponsored candidates from outstation are the only exceptions. A beautiful Chapel, which is open to all on Tuesdays and Thursdays, was constructed in 1952 and was dedicated to the memory of Bishop Chitambar, the first Indian Principal of the College.

It stands white as snow. In front of it is a lush green garden and opposite to it is the clock tower of the college still ticking away. Then there is the Thacore Block (1967) which has the Physics Department and finally the Mathews Hall (1962), in which stands the brilliant college library and the administrative offices. In the library, there is a room that treasures the most precious memories of the college. The Archive Room is mainly for visitors and comprises of walls covered with pictures, housing shelves and cabinets that have the oldest microscopes among other scientific equipments and the fattest biology dictionary on display. A musty bookish smell that arises when the room is opened almost gives a whiff of the past and makes it feel like a different page of an old era in the book of history was opened to you. There are copies of college song and picture collages cut out from newspapers that are laminated and beautifully presented on glass shelves. The lighting is so that it appears to be a mini museum of priceless artifacts. They sure are priceless to the college and to the history of the city of Lucknow.

The college also has well-equipped laboratories, an auditorium, lecture theatres and fields for basketball and volleyball, other than a gymnasium.

Because of unparalleled performance of the college in university exams, high standard of library resources and great faculty, Lucknow Christian College was selected by University Grants Commission (UGC) for the College Science Improvement Programme (COSIP) and the College Humanities and Social Sciences Improvement Programme (COHSSIP) in 1976 and 1977, respectively, for encouraging improvement in teaching at undergraduate level to achieve greater heights.

The Principal, Dr. E.G. Timothy proudly states the achievements of the college, one of them being ìA Gradeî earned by Christian College, that was rewarded by NAAC (National Assessment for Accreditation Council) in the year 2004 and lasted till 2009. Christian College was the first college in the whole of Uttar Pradesh to have gotten such recognition. For its excellence in the field of commerce, it came under top 10 colleges in the country in the year 2003. Christian College was also popular because of its achievements in athletics and ever active participation on every level. The college has produced some of the best atheletes. Mr. Ted Mumby in year 1936 led a contingent of athletes to the Olympics.

More than athletes, the college has produced army men who have fought valiantly in various battles including, Indo-Pak war of 1962 and the Kargil. Christian College has been active in the field of NCC and Naval training has been a special part of the college, and thus, have come forth some of the finest Naval Officers. Even the principal is an ex NCC officer and tells that it is an honour for the college to contribute a significant number of students to IMA (Indian Military Academy).

Christian College offers four hundred and sixty seats for B.A., five hundred for B.Sc and for B.Com it has 180 self financed seats and 260 usual seats. The college takes students through entrance examination so that everyone is given a fair chance. Board examinations, according to Dr. John, are often not conducted very fairly all over the state. So the entrance is like a litmus test for all and accordingly the deserving candidates are selected. This time the process was a little delayed because of some “law and order problem” going on in the college. The spokesperson admits that because of the last manager, there was some “trouble”, so much so that it left ripples that lasted for over a year. 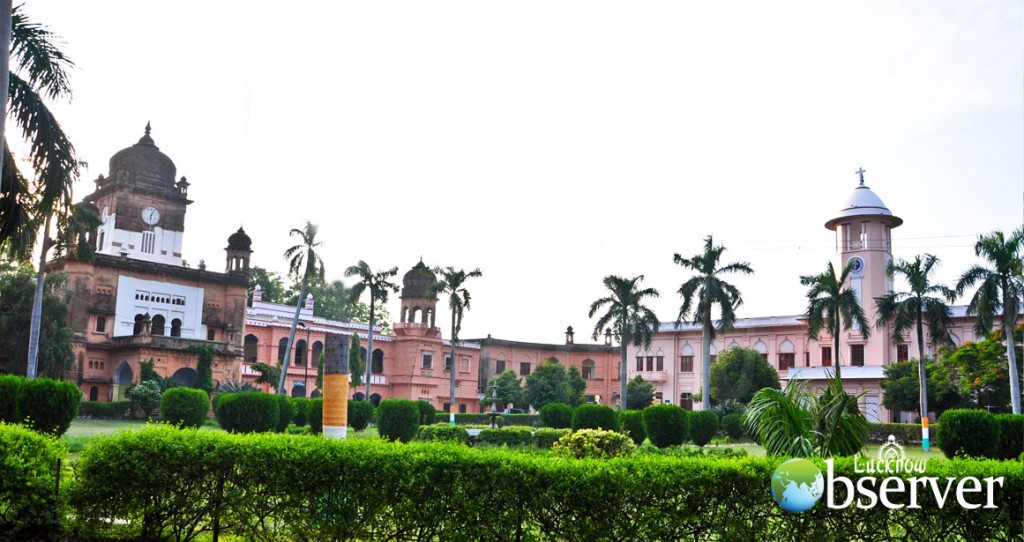 Every year Christian College hosts “Zeit Geist”, a 3 days’ fest in the time of January, this time to be held in the month of November. The word Zeit Geist means ‘the spirit of our times’. The fest embodies fervor of participation by students from all over the Lucknow University. Competitions – academic, cultural and athletic- are in full swing at this time of the year. Almost every year in the athletic meet, Christian College is unbeatable and comes out victorious every time.

There is a long list of famous personalities amongst the Alumini of the college, but the first names that come to Dr. John, the spokesperson’s mind are those of Dr. Zakir Hussain, Arun Nehru and Surjeet Singh Burdalia. Christian College has had good faculty like Hadi Ruswa, the writer of Umrao Jaan, who taught Urdu in the college.

Other than producing and being associated to great personalities, Christian College has often acted as a shooting site for many films. In the city of Lucknow, the college campus has been one of the favorite of Bollywood directors as it is like a slice cut out of the city of Nawabs. Picturesque scenes have been shot here for films like Dawat-e-Ishk. Recently filmmaker Himanshu Dhulia and Anurag Kashyap came to Christian College. An upcoming film, Milan Express, is to be shot during the winter vacations in the campus.