The decidedly Persian contours of the Rumi Darwaza, the ramparts of the Residency and the ruins of Qaiserbagh represent the quintessential Lucknow, a city occupying magical hold on the imagination of historians and tourists alike. 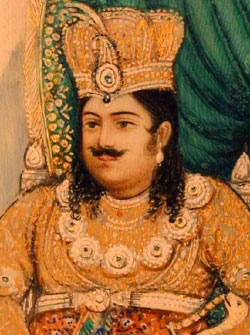 Wajid Ali Shah’s Lucknow and its gossamer opulence have taken on sepia-tinted hues. Tales of intrigue and magical nights of the nawab’s soirees waft in the air like strains of a sughar piya Bhaiya Sahib Ganpat Rao thumri that continues to hum in the Lucknow consciousness:

What has dwindled and needs reinvention and restoration is patronage and primacy of art and music, particularly thumri recitation and Kathak dance, which are a strong signature of Lucknow from the realms of Nawab Wajid Ali Shah.

Remnants of the darbar linger in the imagination and are centrestage due to word of mouth information and prolific Lucknow brochures that keep the past alive.

What is becoming hazy and forgotten is details of music and dance, both a heritage of the darbar!

Among the poorab ang thumri gharanas or performance styles of the Lucknow bandish thumri matured into an attractive form in the 18th century and which played a key role in the development of thumri as one of the four important genres of Hindustani classical music… others being khayal, dhrupad and tappa.

The zenith of the Lucknow bandish ki thumri owes its stature and historical significance to the royal court of Awadh where Nawab Wajid Ali Shah, the 10th and the last Nawab ruled during 1847-1856.

He was subsequently sent to confinement in Matiaburj in Kolkata even where he ran his kingdom with much revelry and pomp. Lucknow was the city of garden, granary and the queen province of India and the British wanted Lucknow to be theirs.

The Lucknow bandish ki thumri was unique in the sense that it was usually composed to teentaal of 16 beats or ektaal of 12 beats and was designed to accompany a kathak dance performance.

The text or lyrics were mostly inspired by Krishna and braj bhasha lyrics and the music accompaniments were tabla and sarangi. The thumris were rendered as independent musical presentations but also complimented a kathak dance.

The most famous thumri in Lucknow remains babul mora naihar chooto hi jaye, written and sung by the Nawab himself in slow tempo, or vilambit taal.

Wajid Ali Shah wrote under the pen name Akhtar Piya and this thumri was written when he was banished by the British from Lucknow in 1856.

His wife, Begum Hazrat Mahal was also a consummate poetess.

Wajid Ali Shah learnt thumri from Ustad Basit Khan, Ustad Pyar Khan and Jaffer Khan who was a son of the legendary Ustad Chajju Khan Tanseni. Wajid Ali Shah was a great composer as well. He wrote 40 poems and invented ragas like jogi. His bani and radha kanhaiya kissa are well known works of literature.

The Nawab was a great patron of Kathak dance and an accomplished dancer himself.

He had a harem, called parikhana, full of beautiful courtesans who learnt thumri and Kathak and held performances in his jogia jashn, a frequent court function of music and dance at the Qaiserbagh Baradari, to which the entire city was invited.

The Kathak dance is a sister art of thumri, so to speak, as there is much in common. In the Mughal durbars, Kathak was performed by courtesans, who existed in fairly large numbers in Lucknow as well. But the Kathak that developed in the durbar of Wajid Ali Shah blossomed into a sophisticated classical genre that became famous as the Lucknow gharana.

The founders of this gharana were from the rasdhari tradition and Krishna devotees. The father of Lucknow gharana of Kathak was Ishwari Prasad Mishra from the Handia district in Allahabad, whose son Prakashji migrated to Lucknow to be in the durbar of Nawab Asaf-ud-Daula.

The sheer neglect of this once glorious tradition brings to mind the famous thumri: Jao Qadar, nahi bolo hamse…..

This was written by the Vazir Mirza Bala Qadar, better known as Qadar Piya, who was a renowned thumri composer in Lucknow. Qadar Piya’s bandish ki thumri had once overpowered the popularity of dhrupad and khayal.

Lallan Piya, Saras Piya, Nazar Piya and Sanad Piya were all famous thumri composers of the Lucknow bandish ki thumri style, hailing from different cities of Uttar Pradesh that found a home and patronage in Lucknow.

The Lucknow bandish ki thumri had the inimitable Lucknow stamp of the city’s conversational wit! The Ganga-Jamuni culture of Lucknow imbued these thumris with panache and elan and was loved by the aristocracy and ordinary people of the day.

The same gave way to the bol banao thumris of Banaras that have survived as the reigning thumri style ever since.

Gone are the mogra scented soirees of Lucknow, the hukka-laced mehfils of the rais and zamindars where famed femme fatale courtesans like Haideri Jan Choonewali and Gafooran of Lucknow had reigned supreme. They were the cynosure of royalty and belted out thumris in night-long soirees.

The poetry of Lucknow and the thumri of Lucknow need to once again resound from its parapets and the government and private organizers need to revisit the bygone era and its glories to recreate that once-upon-a-time picture in Lucknow, to create a mood and ambience that is befitting to a city like Lucknow.