The Cemetery of the Invaders

In the lush dense trails of cantonment area a little known nawabi relic exudes its charm. These grounds were made into Vilayatibagh during the reign of Ghazi-ud din- Haider who became the last Nawab Wazir of Oudh after the death of his father Saadat Ali Khan in 1819. Under the influence of the British lord Warren Hastings he declared himself the first King of Oudh (Padshah-i-Awadh), ruling the kingdom from 19 October 1818 to 19 October 1827.

A patron of art, he adorned the Lakhnawi landscape with many monuments of European and Mughal style and also the essentially Nawabi features also figured. The beautiful tombs of his parents at Qaiserbagh, the pristine Moti Mahal compounds, Qadam Rasul lying close by Vilayatibagh, Chattar Manzil and the precious Shah Najaf Imambara were built during his reign. He is also credited for fashioning an elaborate system of tax revenue for the maintenance of the Imamabaras called Vasiqa, effectively functioning to this day. It was for his beloved wife Vilayati Mahal that he raised this place to be a peaceful natural den of beauty. It was the site for royal entertainment, lavish parties and amusements. However, some historians also claim that it was built by his son Nasir-ud-din-Haider (1827-37). On the road ahead of Dilkusha palace, at a right turn beyond the railway crossing this relic of the royal garden can be encountered in its quite retreating pride. It’s supposed location is between the two palaces Kothi Dilkusha and Kothi Bibiapur.

Once these premises used to thrive with rare and beautiful flowers and trees, maintained with utmost care, soothed by the soft cool breeze emanating from the Gomti flowing nearby. The river’s tranquil wave still exudes pleasure but it’s only a cemetery now, a place where graves of British officers rest. The garden was largely destroyed during the siege of 1857. Built in the Awadhi style the place has two beautiful entrances, the prominent being the west. The east gate at the other end opens towards the Gomti. Even today the garden lies in the boughs of great natural beauty, trees standing over the remnants in a peaceful grace. The structures along the precincts are made of lakhauri bricks of the lime-surakhi mortar. The square plan of the building spans over a length and breadth of about 200 metres. It is surrounded by high enclosure walls meant to serve as a screen for the royal women. The western enclosure wall with the elaborate gateway and grand flanking figures is higher.

The North West side of the garden has a structure with a few cells with a courtyard in the middle. The entrances to these are adorned cusped arches. During the following British rule several additions were made to king Ghazi-ud-Din’s sprawling royal estate. On the south west two more cells of British masonry were erected. Arched bridges, wells and the existing cemetery by which the place is known today were formed as well. The Vilayatibagh cemetery as it is known now, tells the story of three British officers.

The inscription on their graves, though not easily discernible on the tomb, speaks of Mr. Henry P. Garvey. It reads, ìHere lies Mr. Henry P. Garvey, Acting Mate, Her Majesty’s Ship “Shannon” killed before Lucknow March XIth MDCCCLVIII. Blessed are the dead, which die in the Lord. ìHe was killed during the attack on the Begum Kothi.

The other is Sacred to the memory of Captain W. Heley Hutchinson, 9th royal Lancers. Born 5th March 1833, he was mortally wounded in an attack on the rebels near the Musa Bagh, 9th March 1858. His brother officers erected this monument. During the operations at the Musa Bagh on the 9th March he repeatedly charged the flying enemy, following them up for about four miles. A small body of them reached a deep ravine through which they could not ride; and it was here that Hutchinson was mortally wounded. He died on the 22nd March 1858 and was buried in “the beautiful walled garden at the riverside below the Dilkusha.”

The third is in memory of Sergeant S. Newman, 9th Queen’s Royal Lancers, who fell mortally wounded in pursuit of the rebels near the Musa Bagh, 19th March 1858; wounded in the same affair as that mentioned above. Two of these lies close together while the third is situated at some distance away.

Sadly much like other monuments in the city left to a state of negligence, for a long time this place remained in a state of decline until the Archaeological Survey of India took its upkeep some years ago. It has managed to restore some of its old dignity and charm, the decaying layers of moss and deface have been removed. But the little lifts have been made at a regrettably slow pace. Encroachments still stand and it seems the complete restoration is a long way off in the future. The slow pace of work is keeping the pleasure and beauty of this place from the people. For the royal grounds to be available for peaceful strolls and exploration, a more active and enthusiastic approach is needed.

Writer is the Editor In Chief of The Lucknow Observer & founder of LUCKNOW Society. 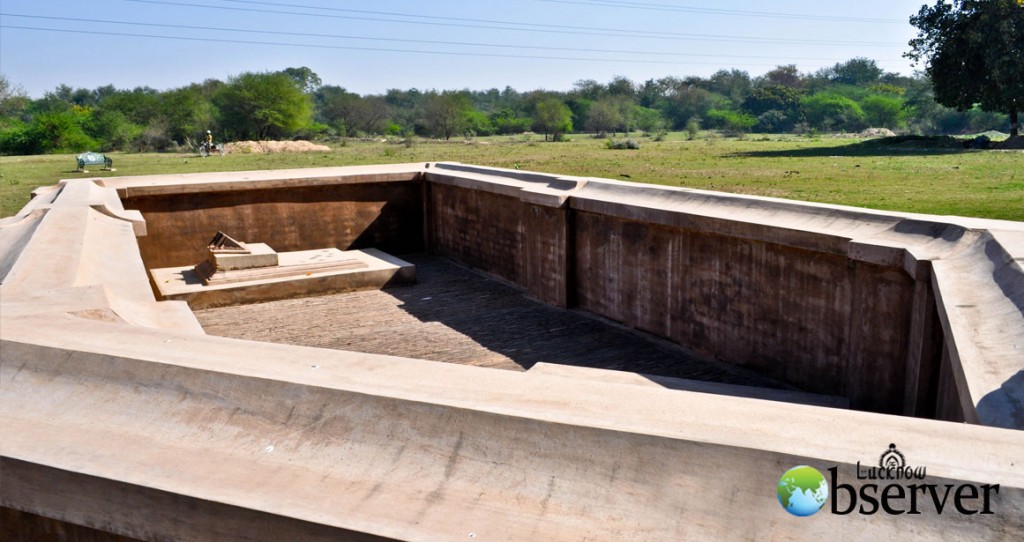