She Dwelt Among the Untrodden

Farangi Mahal, in the heart of old Lucknow, has been a renowned centre of Islamic learning for several centuries. Successive generations of Farangi Mahali scholars have left a vast legacy of manuscripts and published work. The women associated with this enlightened environment were also often well read and academically inclined. But apart from oral tradition passed down the generations, little is known about their intellectual pursuits and reference to them in family histories is scanty. In keeping with the family tradition, these women maintained low profiles. Among them was Fatema Sughra Haya, the second of three children of the renowned scholar, Maulana Qiamuddin Abdul Bari. Her mother, Khurshidunnisa, also from a family of scholars, was well traveled and proficient in Urdu and Persian literature.

Integrated in the Awadhi culture, poetry was one of the outlets available for self-expression to those endowed with this precious gift. When Fatema Sughra started publishing her poetry in 1930s and her name appeared in the public media, some family members objected. She then took up a pen name, Haya, and has narrated this episode in the preface to her collected poems. Entitled Kalam e Sughra, (Poems of Sughra) it was published and distributed by Hamdam Press, Lucknow, soon after her death in 1948. The second edition of her poetry, entitled Nawa e Agahi, (Call of Enlightenment) was published in Karachi in 1967 by Khatoon-e-Pakistan Press. This slim volume has traveled with the Farangi Mahali diaspora. Some of the poems written by Sughra are regularly sung by descendants of her extended family around the globe during Prophet Mohammed’s birthday celebrations. According to the introductory note included in both the above mentioned editions, she had also written plays, short stories and essays which were misplaced or accidently destroyed by her during her emotional upheavals.

In his preface to Kalam-e-Sughra, her brother Maulana Jamal Mian Farangi Mahali, eleven years her junior, has included a brief outline of her life. Their father, Maulana Qiamuddin Abdul Bari died suddenly after a stroke in 1926. During the same year, Sughra, aged around eighteen married a cousin, Hakeem Sirajul Haq, who was also from Farangi Mahal. Subsequently her depressive illness seemed to have manifested. Maulana Jamal Mian has described her suffering, and the concern and anguish of family members. There were a few brief remissions, but her condition continued to deteriorate, resulting in the failure of her marriage and her return to live with her own family. All possible forms of treatment were attempted, including drastic measures such as blood-letting, but nothing was of much help. However, even during her illness, Sughra continued to write and was preparing to publish a collection of her poetry. She had written a preface, which is included in her book. It reflects on her eagerness to compile and publish her poetry collection. Some of her last few ghazals are acutely personal and describe what she was experiencing. During the final stages of her illness her family managed to consult a European physician; however, they were told that her condition was too far advanced for the treatment to be effective. (Jamal Mian: Kalam-e-Sughra Lucknow 1948). She died aged forty, just before the publication of her book. Maulana Jamal Mian never got over his sister’s tragic life and her untimely death. He regretted that she did not get the best possible and contemporary medical care. Her pen became one of his cherished possessions. It remained on his bedside table, until he passed away peacefully in Karachi in 2012, surrounded by his children few weeks short of his ninety third birthday. He knew how intelligent, capable and creative his sister was, but she was unable to realise her full potential due to her gender and her ill health. This probably contributed to his departure from family tradition in the education of his children, especially his daughters. 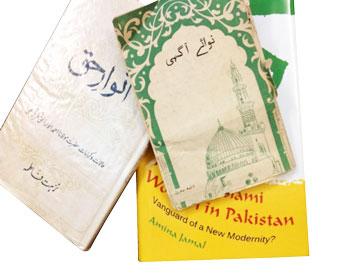 Prior to her illness, Sughra was a popular figure, much loved and admired. She was surrounded by several generations of her family and lived in a large and comfortable house. Relatives and friends, many of them published poets and scholars visited often, some from nearby homes. Parts of her house were reserved for guests from outside Lucknow, who came and sometimes stayed for long periods. These included leading personalities of her time, who often brought along family members. It was a highly interactive and vibrant environment, socially and academically enriching. In the introduction to her poetry collection, Sughra has acknowledged the guidance she had received from three of her male poet relatives, who were also her father’s students. As mentioned by Shaqif Barelvi in his introduction to Nawa e Agahi, Sughra emerging from the pages of her little book was a remarkable lady. For someone who led a sheltered and secluded life, she was unusually proactive, well informed, and politically and socially conscious, with views on contemporary issues. Although her devotion to Prophet Mohammed is illustrated by several poems, including the widely acclaimed, Naat : Arab ke Chand, (Naat : poem in praise of the prophet: The Moon of Arabia) her book highlights many other aspects of her life and her personality. Her first poem, written for her little niece whose pet parrot was attacked by a cat, presents a home vibrant with children, fun and gaiety. A similar message is conveyed through another poem about game play with dolls. The ladies of the house ran a maktab or school for girls of the neighbourhood. Apart from reading the Quran, they were taught Urdu and Persian, sewing and embroidery. Two of Sughra’s poems are addressed to these girls, aimed at instilling in them courage, innovation and unity. Her writing is interspersed with affection for her brother, which is especially evident in the poem entitled Bahen ka khat Bhai ke nam. (A sister’s letter to her brother). Written in 1939, it was published in the daily Haqiqat Lucknow. The small number of ghazals in this collection is enough to highlight her spontaneity, pathos and linguistic skill. Her religious and political consciousness is highlighted in a remarkable poem expressing her outrage at a Shia-Sunni conflict. Her views reflected her family’s Sufi tradition and the influence of her famous father who promoted religious tolerance and strove for Hindu-Muslim unity.

Falak bigarne paye mera nishan na kaheen
Bane mazar mera zair e asman na kahein.
(May the stars not erase the signs of my presence / May my grave not be exposed to the sky)

Although she died childless, Sughra is survived by her poetry and by descendents of her younger brother and elder sister. Her poetic and creative talent continues in her nephew, Mahmood Jamal, an internationally acclaimed poet, writer and translator. She would be especially pleased with her niece, Amina Jamal, and her grand-niece, Nuzhat Fatema,for their contribution to the family tradition of Islamic scholarship. Amina, an associate professor at Ryerson University Toronto, is noted for her work on women and Islam. Nuzhat Fatema has authored several scholarly and prize-winning books, travelogues and short stories. She continues to live in our ancestral home in Farangi Mahal with her husband, children and the head of our branch of Farangi Mahalis, her uncle and my cousin, Maulana Jalaluddin Abdul Mateen.

The author has retired recently as professor of microbiology from a Malaysian university.
She is a consultant microbiologist residing in Kuala Lumpur.