“Travelling – it makes you speechless, then turns you into a storyteller”

The beauty of writing flushed with the truth and inspiration of travelling makes for a writer’s ultimate bonanza and it is not always that the magnificent land of a thousand splendors beckons you to a literary splurge. In a unique initiative to boost tourism prospects for the state the government organized a travel writers’ conclave from 3rd – 6th October in the city. 20 prominent travel writers from across the world and 30 Indian leading writers participated in the event that had the most enthralling itinerary. 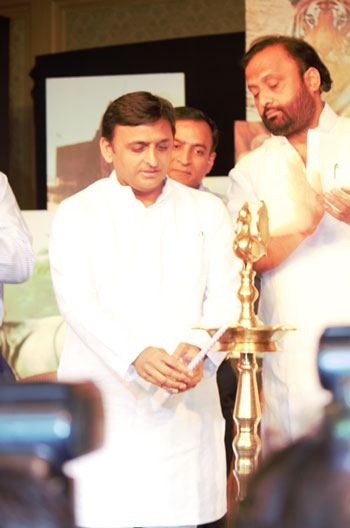 The journey that culminated in Lucknow at Taj began with a tour of iconic Uttar Pradesh cities that have a global and immensely rich cultural appeal. A group of twelve writers experienced the ethereal beauty of the Taj Mahal in Agra. They also took part in the Taj nature walk; visiting Bear rescue facility in Sur Sarovar bird sanctuary and Chambal wildlife sanctuary. They visited in solemnity the mausoleums of Akbar and Itimad-ud-Daulah and the historical imminence and mystique of the city of Fatehpur Sikri were revealed to them. To truly grab the essences of a place one must adhere to its arts. The writers were also made familiar with the beautiful stone carving work and craftsmanship on silk as well.

Then it was time for a dive in spiritual antiquity, to visit the world’s oldest city with all its abundance and ripe culture and myths. Benares was the next stop for another group of 16 travel writers. The divine and famed Ganga aarti, a walk through the narrow enchanting streets, savoring delicious Benarsi delicacies, a look into the making of the fine silk and a pilgrimage to the place of Buddha’s advent, Sarnath – these were the many treasures held open for their benefit.

A final group of 20 writers were reserved to relish the wonders of our city, the city of nawabs and they visited all the prominent historical monuments. They were lucky to indulge in the mouth-watering kebabs and other food. A show of kathak and some divine Sufi music was offered as their entertainment.
Under the inspiring influence of all these beautiful places all of them finally assembled at the Taj for the 3-day conclave. The idea was to make them all experience the riches of Uttar Pradesh in all its earthy glory and unfiltered charm.

The government has been commendably active in its effort to boost tourism in the state with its heritage arc initiative. This was another successful and innovative endeavour on its part.

Addressing the conclave CM Akhilesh Yadav spoke of the state’s immense potential for tourism, how its various regions are rich in some aspect or the other and the success of the heritage arc and more plans. He proposed that the tourists coming to the state will be encouraged to pen down their experiences so that people around the world could know of its unique and valuable traditions, music and literature, etiquettes, cuisine etc. the employment of social media and other technologies for this cause will also be done. The land of the Buddha, Lord Ram, divine and literary genius of Tulsi, Surdas, sages and seers, Kabir Das, Rahim should be given the importance it truly deserves and their legacy be preserved.

The promotion of tourism here does not only have a monetary or profit value only, it must lend to the prestige of the state.

He made some promising announcements about development projects in the state. The Taj Ganj is being developed to allow more tourist inflow. 12 other religious, cultural historical monuments are being maintained, which tourists do not visit because of lack of facilities. Emphasis on the mughal era riches present there is being made ñ a Mughal museum is underway. A lion safari is being built in Etawah. The cultural and religious centers of Brij and Bateshwar are also being developed; the ‘home of the Taj’ campaign is also effective. Developmental projects are also underway in the city of Kashi.

In Lucknow the development of Gomti river waterfront is underway and so is active the development of the crucial Hussainabad heritage zone. The luck now metro rail project, an international cricket stadium, the JP Convention centre and a world class Janeshwar Mishra Park are some of the landmark projects of the sate for the improvement of its capital city. 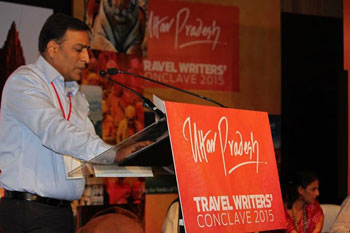 A testimony of the success of the state’s efforts and the prospects of tourism -the state is ranked second in domestic tourist arrivals and third in the number of foreign tourists as per data released by the central government for the year 2014. Only recently the World Tourism and Travel Council had awarded UP for good work in tourism and other sectors. The CM claimed that they are aiming for the number one slot. The Agra-Lucknow expressway is also being constructed at a good pace to facilitate greater connectivity and movement between the two places.

The writers were happy with the facilities available in the state for tourist and enjoyed the overall experience. They are all consistent bloggers, avid writers from around the globe and together they formed an interesting and exhaustive variety of cultures and experiences. Marilyn ward from Canada, Poland’s Mieczslawaa Pawlowicz, Malaysia’s Sun Siyong Sia, among others and Indians, Rahul Diaz, Gustasp Irani, Prakash Dubey, Kiran Mehta, Anad Katti, Fernando Monte, Dr. Silva and others.

The writers spoke of the beauty of the country, many of who were repeat travelers. Marilyn from Canada has been blogging about the country for the past ten years. She says the beauty, the culture, draws us here but some things do bother. Everywhere people stare at you, like you are an alien. Trains often run late.

Other writers expressed similar concerns. They spoke of improving connectivity and reducing the distance between places through that, so that people could see more in a shorter time. The beggars present at every juncture depress them. But apart from these things, there is so much to see, to learn, to enjoy and relish, that they cannot help coming back. Many of the writers have been writing about their visits, relating their journey to their friends and relatives across the world.

The aim of the entire initiative was to enrich these writers with the experience of Uttar Pradesh’s unique heritage, and also enrich the place with their writing and description of their experiences. It is hoped, in their writings, and the words of tourist to come, the state will find the recognition and prestige it deserves.

Writer is a student and her passion is painting 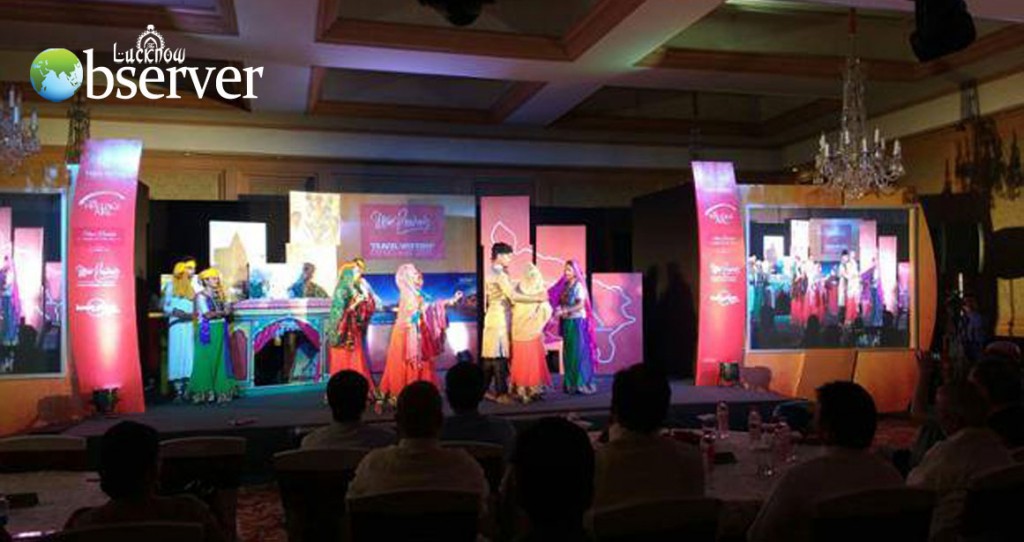