The Deteriorating Ruins of Art

Lucknow Arts College was established in the year 1911 by the then ruling British government. Mr. Nathenial Herd was the first principal of this college. He especially emphasized on western realism. The design concepts and the methods for teaching were adopted and various arts & crafts courses were also modeled on western pattern ignoring Indian sensibilities but ignorance of the Indian sensibilities was simply a shield to decrease the supremacy of art of Lucknow to bring up the change in the ideology and living standard of the commoners. On November 1, 1892 the school was established as the School of Industrial Design. Wingfield Manzil was the place somewhere near Lal Baradari, where the college was firstly situated then it moved to Aminabad and later to Baans Mandi and after that to the current place Mankamneshwar Mandir Road. The school was re-named as Government College School of Arts and Crafts in 1917. In 1925 the Indian school of painting was brought to the curriculum, and in the year 1963 graphic arts courses were introduced.

In 1975 the college merged with the University of Lucknow as a separate college and with this three National diploma courses of the college were converted into degree courses. 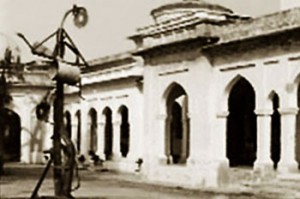 The first Indian Principal of the college Shri Asit Kumar Haldar and Shri L.M. Sen through one of their association in the year 1925 make everyone felt the need of liberalization in the system with what we broadly attributed as traditional Indian School and the other for his academic approach. In this connection the names of Shri Brieshwar Sen, Shri Hirenmoy Roy Chowdhry, Shri Shidhar Mahapatra, Shri H. L. Merh and Shri Sudhir Ranjan Khastgir should also be mentioned as they extended the great traditions of this College in further many upcoming generations of the learners of this college. Two important influences which are worth to be mentioned are these traditions which continued but with the beginning of the 6th decade, a few important names emerged, who made significant contribution in bringing out academic reforms, namely Shri M.L. Nagar, Shri R. S. Bisht, Shri A.S. Panwar, Shri B. N. Arya, Shri N. N. Mahaptra, Shri Mohd. Haneef, Shri U. N. Verma. The list is not exhaustive. To maintain its reputation as one of the major Art Institutions of the country offering highest quality of training in the field of Visual Arts, most modern concepts in terms of style, manner and techniques were adapted. A completely new generation of artists like Shri Jai Krishna Agarwal, Shri P. C. Little and Shri Satish Chandra were added in the faculty.

To impart highly professional training the College has fully equipped workshops of Graphics, Ceramics, Photography, Woodwork, Iron and Heavy Metal Work, Computer Graphics and studios for Painting, Sculpture and Commercial Art for in-depth study of various branches of Visual Arts the College has full-fledged Library and Museum but on the current period these labs machineries and all other equipment’s can be seen dead because of no work to be done by them since a decade nests, wastes of the birds, layers of dust has choked the machineries and the classrooms, such condition of the classrooms and machines has been made because they have been locked since last 10 years approx. the current students are helpless and incapable to get the required study materials and facilities, which includes even the basic daily pay for the need of a model to pursue clay modeling. The students of the college on their own selves manage the models and they are necessarily the beggars from the roadside for few hours as they are available on cheapest costs the students can bear after paying their course fees, although the front elevation of the college would not let us assume that such horrified conditions are there inside the building which the students of this government college have to face regularly even after paying the fees of a ‘Self Finance Course’ every year.

The current college administration says that, the University of Lucknow is not providing them proper funds and facilities. The college premises has been turned in to dumping yard where all the scrap is kept to decline, even the old principal residence has been tuned into classrooms which do not even has proper sanitation facilities for the students, the building is covered all around with bushes with no electricity or any other classroom facilities, students are not even provided the basic equipment’s by the college to protect their work. The faculty members are forced to protect the machines, chimneys of the machines through pieces of waste plastic sheets and bags.

The College, besides, providing residential facility to students and staff also provides facility for co-curricular activities, games and sports. These activities also have been declined since last few years as the halls for these activities have been locked to keep the answer sheets in them. The Staff and Students of this college have participated in State and National level tournaments, N.S. S. and other Arts and Cultural programmes earned laurels on numerous occasions. Former principal Jai Kishan Agarwal received the International Print Biannale Florence Italy award in 1974.

There is a plan to introduce new job oriented short courses in designing and also to modify some of the existing Diploma courses according to the need of the time, but with the current status of the college all such plans will be of no good for any of us.