The Fast and the Festivity

All the cultures have been worshipping Sun since life came into existence. Every community has celebrated and adulated the life gifting forces of Sun. And in Indian sophistication, Sun has always been idolized as the Universal Life Force over centuries. The delight of every single day is dedicated to Sun but the most pious and difficult worship in India is the Chhath Puja where the devotees worship the Sun for four days ritual. It is performed in order to thank Surya (sun) for sustaining the lives on earth and to request the granting of blessedness. It is celebrated all over, majorly in the state of Bihar, Uttar Pradesh and Northern India but not very solely in other parts of the country. Although the festival is observed most likely in Mithila Region and Terai Region of Nepal, but the migrants from these areas have marked the essence of this Puja. It is performed on Kartik Shukla Shashthi, which is the sixth day of the month of Kartik as per Hindu calendar and the month of Kartik falls usually in the month of October or November. It is also celebrated as Chaitra Shashthi in the summer (March or April), some days after Holi where it is called Chaiti Chhath. Chhath Puja is also called ‘Suryasashthi’. The mesmerising is the view at all over the ghats where this Puja is celebrated especially at Ganga, Yamuna and Narmada ghats, where in mass devotees gather. Ghats are decorated with colourful papers, ribbons, banners and lights and the floating Diyas over the water is pulsating. 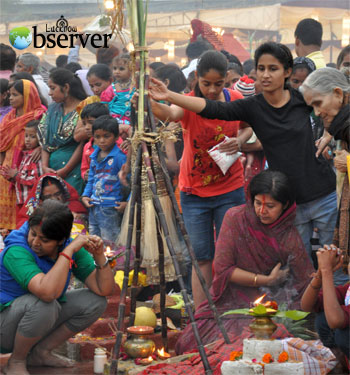 In Hinduism, Surya worship is believed to cure many diseases, and helps ensure the long life and prosperity of every living being. It is believed that Surya is the only visible God, we can see, perceive and pray. Surya is considered as the life-giver, ‘Pran-data’ of the entire universe. Surya is essence for all life. All Vedas regard Surya as the witness of all actions performed by any living or nonliving being. The Vedas and the Puranas like Brahmaanda Purana, Markandeya Purana, Rigveda and the epics like Uttar Ramayana, Kashi Khanda and Mahabharata depict completely the tenor of Surya. It is limned that Surya was born to Rishi Kashyap Prajapati, one among Navbrahmas and Aditi, a celestial maiden. According to Markandeya Purana, Surya is considered as the creator, the Brahma. From this ancient supreme power the whole of the world is evolved. Surya is the chief among the Navagrahas. Standing in water with half of the body inside the water and devoting all of yourself to Surya at the peak of its rising and setting itself is very soothing and serene.

It is believed that worshipers of the Chhath Puja after taking holy bath followed a period of abstinence and used to become separate for 4 days from the main family. But now with the fussed lives the tradition has now become limited. Devotees offer prasad to Sun including sweets, Kheer, Thekua and fruits put up in a small bamboo tokari. The prasad is cooked without salt, onions or garlic with the embedded purity. It is a four day festival. On the first day, the devotees take bath early in the morning in the riverbank, pond or a common large water body and bring some ‘Jal’ to their home to prepare the offerings. The home and the surroundings are cleaned this day. The Devotees take only one meal in a day known as kaddu-bhat cooked only by using the utensils made of bronze or soil or mango wood over the soil stove. On the second day (a day before Chhath) Panchami, devotees keeps the fast for whole day and end their fast in the evening after sunset after the worship of earth. They offer Rasio-kheer, puris and fruits in the puja. After taking meal in the evening, they go on a fast without water for the next thirty-six hours. On the third day (day of Chhath) they offer the Saanjh Arghya at the ghat of riverbank. Devotees stand on knees in deep water or waist deep water at the time of offering Arghya to setting or rising Sun. After Arghya, they wear a single saree of turmeric yellow colour. At the night of Chhath a vibrant event is celebrated by lighting the diyas made of clay under the covering of five sugarcane sticks. The five sugarcane sticks symbolize the Panchatattva (earth, water, fire, air and ether) of human body which is made of this Panchatattva. On the early morning of the fourth day (Palan), devotees along with their family and friends offer Bihaniya Arghya at the ghat of the riverbank. In the evening Arghya devotees express their thanks to Surya and the morning Arghya is considered as a request for a bountiful life, peace and prosperity over the years to come. Devotees end their fast by having the Chhath prasad. 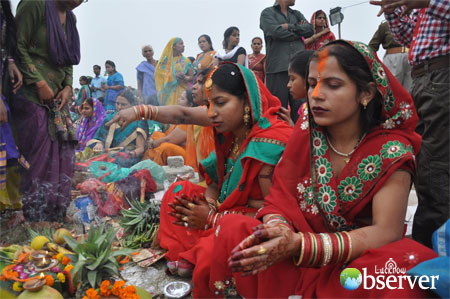 According to the epics, in ancient time the festival of Chhath Puja was performed by Draupdi, the wife of Pandavas who were the rulers of Hastinapur (Modern Delhi) during the exile from their kingdom. One day they were visited by eighty eight thousand wandering Bhikshukas. According to the Hindu customs guest are treated heartily and offered food. But Pandavas barely had enough for them and thus were hardly in a position to fulfil their obligation as Grihastha (householders) and to offer meal to the visiting hermits. Seeing Pandavas in deep anguish, Draupdi asked for help from the noble sage Dhaumya, who pleased upon her the merits of worshiping the Surya. After the Chhath Puja Draupdi was blessed by Surya and was able to resolve the immediate problem and also the Sun worship helped the Pandavas later gain their lost Kingdom. Since then Chhath Puja is being glorified.

Another myth behind celebrating the Chhath Puja is related with Lord Ram. It is considered that Lord Ram and his wife Sita had kept fast and practiced Puja to Surya in the month of Kartik in Shukla Paksh on the sixth day during their coronation after when they returned back to the Ayodhya completing 14 years of the exile. From that time, Chhath Puja became an important and traditional festival of Hindu religion.

Chhath Puja has special outturns during the Sunrise and Sunset period. The Sunrise and sunset are the most important time of the day during which a human body can safely get the solar energy without any harm. Thus is a myth of offering the Saanjh Arghya and Bihaniya Arghya to the Sun at the Chhath festival. During this time the solar energy has low level of ultraviolet radiations and hence it is beneficial for human body. People perform Chhath puja in order to thank the Lord Sun for continuing the life on the earth as well as to get blessings for the peaceful life. Chhath Puja provides the mental calmness (by detoxifying the body and the mind), increments the energy level and immunity and reduces the frequency of anger, jealous and many negative emotions. It is also depicted that following the rituals of the Chhath Puja helps in slowing down the ageing process. All these beliefs and rituals of the Chhath Puja make it the most significant festival in Hinduism. 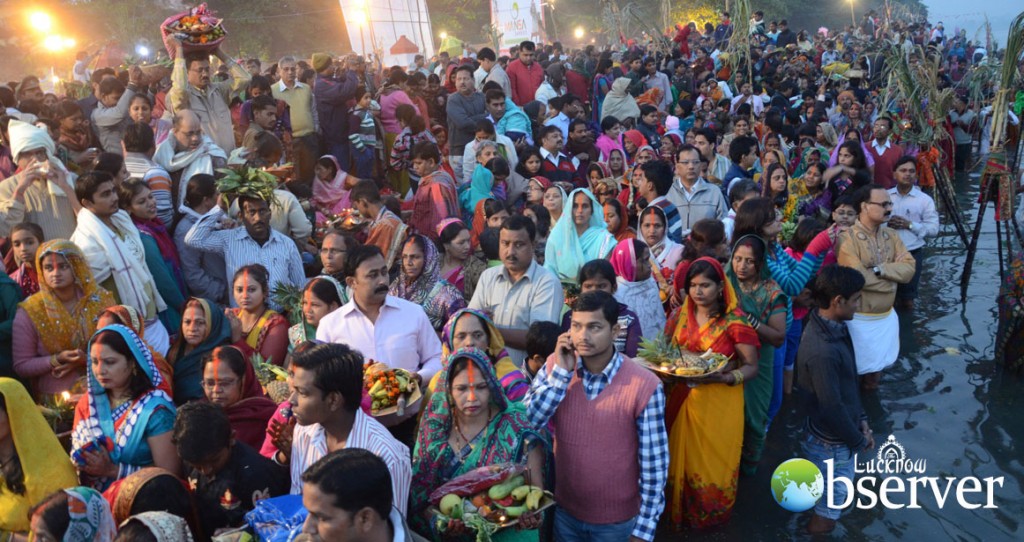