In the present scenario, environmental pollution and sustainable development are some of the main challenges for mankind. The expansion of usage of personal vehicles is a very dangerous symptom for the society in many ways due to which the rate of pollution and issues relating to traffic have increased at an alarming rate. The reason behind the increase in road accidents is the rise of vehicles being driven at a high speed. 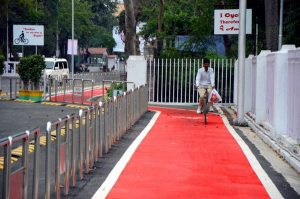 Keeping in mind these issues, the government of Uttar Pradesh is starting an initiative under the leadership of the young and dynamic Chief Minister Shri Akhilesh Yadav. This is based on the best transportation mode i.e. bicycle. Bicycle is not only the symbol for a much praised and used transportation, but it is also a model which is eco friendly as well as very easy for daily usage. It is very popular in Netherlands, Germany and the rest of Europe, along with China and the United States of America because it not only keeps you physically fit, but also does no harm to the environment. Keeping in mind the success of usage of Bicycle in various parts of the world, Akhilesh Yadav personally prefers bicycle to send a message to all possible stages of public domain. Recently, on the closing day of Saifai Mahotsav, he rode the bicycle for around 24 k.m. from Saifai to Lion Safari. This sends a clear message for his encouraging step to promote this eco friendly mode of transportation.

Akhilesh government is very well aware about the benefits of cycling. Last year on 10th November, the state government had started a programme for promoting usage of bicyle through which government wanted to encourage people to use bicycle in their day-to-day life. For this, every metro city would be covered by cycle track very soon. The red color of cycle track covering all traffic modules is based on the successful model of Denmark and Netherlands. The state has also started a guideline and rulebook on the basis of recommended practice for the design and layout of cycle tracks-IRC: 11-1962 by the Indian Road Congress. In Lucknow and Noida such type of cycle tracks are almost completed. In January first week, an official team from the Netherlands inspected this model and gave it a satisfactory nod.

Besides this, on 12th January 2016, the government announced Rs.10793.70 lakhs for a Velodrum stadium in Guru Govind Singh Sports College Lucknow. The Velodrum stadium is a first of its kind indoor stadium in Uttar Pradesh, which will possess all the international facilities and basic infrastructure for cycling competitions. This stadium will consist of eight tracks for cycling.

All these initiatives have a vision for a greater cause i.e. to secure the environment for our coming generations. Such steps by the government are truly commendable. When the whole world is planning to cut the emission of CFC gases and is discussing to have a control over global warming in all possible ways, then such type of steps by the most developing nation’s biggest state, Uttar Pradesh, is very crucial and contemporary.

Despite Uttar Pradesh facing challenges on several fronts like industrialization, poverty elimination, and better education in hand, the Chief Minister is very much concerned about the issue of nature and sustainable development. We know that this is very rare in public domain especially in political arena. So let’s come together and make the nature clean and healthy by using such means of transport in our day-to-day life.