By Saman Habib and Sanjay Muttoo

The writing of long, intimate, humorous, poignant personal letters is now part of a vanishing world for many of us. We were exposed to the experience of a shared reading of letters in our families as we grew up and it is the realization of that loss that perhaps provided the impetus to retrieve what remains of that experience. It was in the evening of our readings on ‘Feminists of Awadh’ at the inauguration of the Mahindra-Sanatkada Festival in February 2014 that the idea first took form…. how would it be to read out from personal letters? It was just a hazy thought…. what does this city mean to its people? The idea seemed both exciting and daunting. Then the first brave step was taken: the actual search for letters.

Friends were pestered, family boxes were emptied out and books were smelt afresh. As our collection of letters started building up, a clearer idea of what exactly we could and would do took shape. It was to be a story of Lucknow, a narrative weaving history, memory, personal relationships and contemporary politics over a span of more than 150 years starting from 1857 to the present times. It would bring alive the joys and sorrows of everyday life in the city, sacrifices during the national movement, memories of separation and longing as the partition of 1947 split families, the resolute valour of revolutionaries as they fought British rule during the revolt of 1857 and the determined effort of the oppressed and marginalized groups as they struggled for their right to lead a life of dignity in a free and democratic India. It was also to be a story of negotiating inter-community marriages, of childhood pranks, of constructing dream houses and bathrooms…

Along with the letters we were also able to get some very interesting photographs of the dramatis personae as it were…..pictures of men and women who had written and received the letters, of houses/buildings that were spoken of in the letters, of old manuscripts and documents, the flood of 1936 and even some taps!! Displayed along with the letters, these pictures articulated another layer of meaning and a heightened sensory experience.

It took us about three months to put all the elements for a performance together. Writing a commentary that would string all the letters in a comprehensive narrative was an immense creative challenge. How do you extrapolate from the particularities of individual letters to present a ‘bigger’ picture? We had to be careful not to over generalize for that would take away from the essence of each letter. It is our interpretation of what the letters may mean in the ‘larger scheme of things’ that informs the commentary in the performance and we bear all responsibility for any errors/misjudgements in our interpretation. We chose to write the commentary in Hindustani so that the performance is accessible to a wider and diverse audience. We have retained the original language of the letters as we felt that the letters deserve that respect! The reading is thus in English, Urdu, and Hindi.

The sharing of personal family letters (and photographs) with others is not easy and we were gratified and moved by the immense trust and openness of all those who had lovingly preserved this treasure and agreed to let us have a look. At times we were hesitant to take names while reading a personal letter, particularly when the people who were being talked about could easily be identified. However, our mind was set at rest each time and real names were retained throughout. This not only made the letters more believable but also made us more aware of the sensitivity with which the reading had to be handled. Apart from yet unpublished/unknown personal letters, we also drew from some published material, particularly those pertaining to Lucknow of the Raj and the national movement during the 1920s and 30s. Our special gratitude goes to Prof. Badri Narayan who shared rare unpublished letters from his own research material.

And so our first public performance was held as a ‘Sanatkada ka Adda’ event on May 3, 2014 at the Sangeet Natak Academy, Lucknow. We were quite overwhelmed by the standing ovation that followed the performance. We believe that these letters resonated with different people in different ways. There was a ‘connect’. We could hear the laughter in the hall as we read the humorous bits and many later said in private that they were moved to tears at the poignant parts. How deep the connection with this city can be is best reflected in a letter a cousin of Saman’s wrote from Pakistan, in which he movingly says, “My body may be in Pakistan but my soul lives on in Lucknow”. 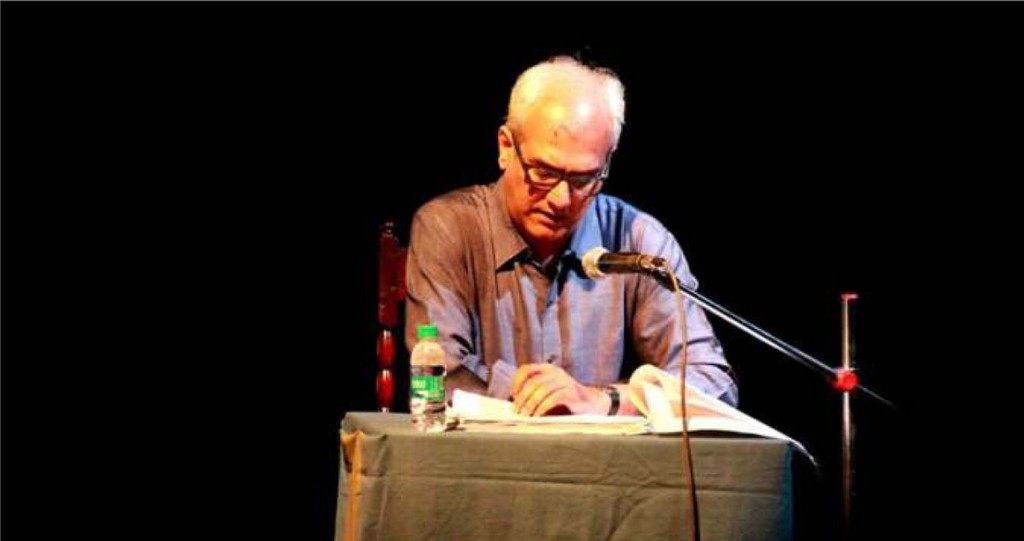 We like to think of ‘Lucknow in Letters’ as a labour of love for the city. For Saman though this wasn’t love at first sight. She says,“When I first came to Lucknow in 1998 I found in my working/living space several elements that were hierarchical, gender-discriminatory and casteist. This was completely at odds with the impression of Lucknow I had before moving here. That set me in search of whether that Lucknow was illusion or reality. ‘Lucknow in Letters’ has helped me find a part of that answer and as we continue this project perhaps the layers of dust will start clearing up…..”

Sanjay says he has often wondered what the ‘legacy’ of a city means. It is easy to be seduced by the Lucknow of the popular imagination….of the nawabs and the excess of manners. However, in the course of this project he realized that the legacy that Lucknow offers for all of us to claim as our own is the great diversity of its experiences – be it the valour of the freedom fighter or the simple lament of a schoolgirl that her mother had packed more dresses for her sister than her. For in the flow of time, somewhere all these experiences shape the ways in which we share and relate to each other in a given geographical space.

‘Lucknow in Letters’ is a continuing project that we hope to enrich with a greater diversity of letters. So if you have letters with the ‘khushboo’ of Lucknow to share, do contact us (through Sanatkada or Facebook).