Kazmain Rauza, built in chowk area in the city of Lucknow by Gulam Raza Khan has been a symbol of communal harmony in the city for centuries. It is said to be an exact copy of the sacred mausoleum of the seventh and eighth Imams of Khurasan, namely Hazrat Moosa Kazim and Imam Hazrat Ali Raza. Strangely, Gulam Raza khan was not the Nawabs, he was one of the converts and his original name was Jagannath Rai and he belongs to the family of Urai Lai Baqqal, who built the Rauza Kazmain in honor of Imam Musa Kazim. Later on he was named as Ghulam Raza Khan after his conversion and was honored with the title of Sharaf-ud-Daulah by Nawab Amjad Ali Shah during 1842-1847 and it was completed in 1269 Hijri (1852), during the prime reign of King Wajid Ali Shah.

This particular monument (Kazmain Rauza) belongs to the second phase of Nawab’s architectonic constructions in Lucknow during the period of 1800-1856. This Nawabi period comprise all the monuments, which belong to the first half of the nineteenth century, before the Britishers annexed Awadh. A mixture of incorporating Indo-Muslim elements and European elements characterizes these monuments. 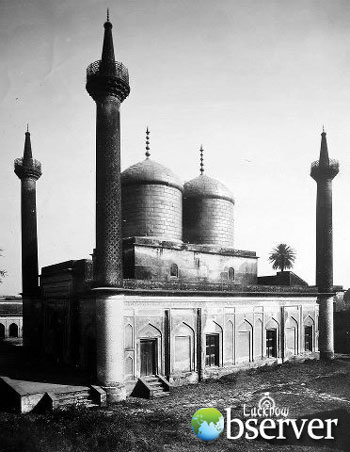 This Kazmain Rauza is said to be the exact copy of the mausoleum of the seventh and eight Imam Hazrat Moosa Kasim and Hazrat Ali Raza. Their graves are close to each other. This 150 years old monument has two large and influential domes set on deep drums with four minarets at four corners. In the original tomb at Iraq the domes and minarets are covered with pure gold but in the copy present at Lucknow has domes covered with brass which was painted with gold and a large courtyard to the east of this monument is known as the ‘Katlgah’ where ‘Tazias’ are buried every year. There is one clear difference in these two structures present in Iraq and Lucknow. At Kazmain in Lucknow, these cylindrical bodies of the domes is covered with brick wall pattern over their surface, while at Kazmain in Iraq the dome’s surface are plain and it appears to be larger and in the original shrine at Iraq the minarets are more beautiful and decorated with complex patterns.

It is said that the time when Gulam Raza Khan came back to Lucknow after visiting Iraq he showed his great desire to Nawab Amjad Ali Shah to construct an exact copy of the Iranian Rauza in the Lucknow city. To execute his idea, artisans from Iran were brought in Lucknow city who constructed the magnificent and beautiful historical building named as Kazmain, which is spread in the area of about 20 bighas.

Rauza Kazmain is one of the monument which was plundered and pillaged by British soldiers during March 1858 in the assurance of royal treasure which was buried somewhere in this shrine by the King of Awadh, Wajid Ali Shah.

The entry to the main Rauza Kazmain present at Lucknow city is through a large double-storied gateway which lead to the ‘Gulam Gardish’ (courtyard enclosed with small arched compartments) where the main Rauza is situated and the central part of the building consists of a square courtyard enclosed within an outer and an inner boundary wall. The main hall of the Rauza has galleries on all four sides, one of which have the grave of Sharaf-ud-Daulah and his wife Sharf-un-nisa. According to Shiah’s traditions, the graves were made with the level of the floor and are not raised. A rectangular marble block is inscribed over the grave of Sharaf-ud-Daulah has distich in Persian poem praising him which comes to ahead with a taareekh which provides his year of death as 1278 Hijri (1861).

According to a Persian poem inscribed in the Nastaliq script, on a black stone tablet fixed over the western entrance, the building was constructed during the prime reign of Sultan-i-Alam Badshah (i.e. King Wajid Ali Shah) is the example of the supporters of the people, Sharaf-ud- Daula and his wife Sharaf-un-Nisa Khanam, copying the architectural style of Shiraz at Iran. The chronogram showing the word ‘Mazar-i-Kazmain’ means the date of completion as A.H.1269 (A.D.I852-53). This archives also records that the honor of religion in Lucknow became the garden of paradise.

There are six entrances present in the Kazmain which go to the ‘Gulam Gardish’ (quadrangle enclosed with small arched compartments), one of which is the Sadar Phatak. A hauz had been provided at the rear of the building and the rows of Sahanchis are all around.

During the first 10 days of the month of Muharram, Taazias are placed in all the Imambaras and chowkies placed at different places in the city. On 10th day of the Muharram when the tragedy of Karbala had taken place, all these taazia are taken out in demonstration for burial at the Karbala grounds by a large number of Muslims and some Hindus as well. In forecast of the huge demand of taazia for Muharram after the festival of Bakreed, a temporary handicraft industry for making of Taazia is seen functioning around Rauza Kazmain where one will find a number of men, women and children busy in the making of the various parts with bamboo and glitz paper to form the taazias of different sizes.

The largest quadrangle to the east of Kazmain is known as the ìKatlgahî or the place of murder; where the decorative Tazias are brought here. Traditionally Mom ki Zari of the Chhota Imambara is specially buried in this very Karbala. Kufa Wali Masjid is also not far from it where the Rauza of Haji Hazrat Muslim lies. There is an interesting story about the Chup Tazia of Lucknow, which was brought from Nazim Saheb’s Imambara to this Karbala after the 18th day of Chehalum. During the 19th century, this famous Tazia of Nawab Aqqan Mian’s Khandan was raised on the day of Chehalum. On one such occasion, Nawab Saheb was arrested and the time when he was released Chehalum was over. Consequently, the Tazia could not be moved from his residence and then he shifted it very secretly (Chup Chap) on the day of the death of the 11th Imam, Hassan Askari. Only a reciter reading holy verses attended this Tazia march, which proceeds from the Patanala. This is the history of Lucknow’s Chup Tazia’.

The Kazmain Rauza thus mentioned is among one of the famous monuments showing the beautiful landscape of the city of Lucknow.

Writer is pursuing engineering; writing is his interest.