Saira Mujtaba stops by the The Parivartan Chowk in the Qaiserbagh area that is forever marked by hurried activity.

The chauraha, or crossroads is the convergence and divergence point for commuters travelling to different parts of Lucknow at all times of the day and at night.

In the midst of much din of traffic and the chatter of paan-chewing lawyers who criss-cross the area in black robes, appearing and disappearing like falcons, stands the magnificent tomb of Nawab Saadat Ali Khan, the fifth Nawab of Awadh in silence.

The area is a vast complex of sprawling lawns carpeted with verdant grass and colourful flowers. And in the midst of all the natural beauty, stand tall and elegant the twin tombs of the Nawab and his wife Murshid Zadi. Built after the death of the Nawab in 1814 by his son, King Ghaziuddin Haider, on the exact spot of an erstwhile residential complex, known as Mahal Khaas Bazaar, where Ghaziuddin Haider had lived as Crown Prince. 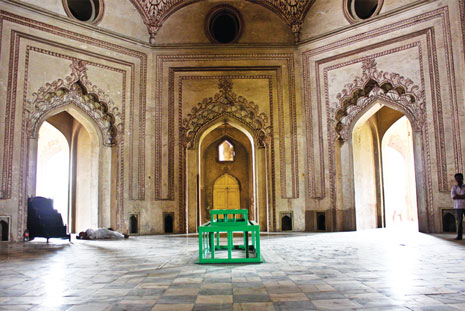 The twin tombs are square on plan and are built of ‘lakhauri’ bricks, laid in lime mortar and decorated with intricate floral patterns of plaster mouldings. Like other structures built by the Nawabs, the tombs have withstood the marches of time without the use of a single iron girder or beam!

The main hall has a rectangular verandah on two sides. Each corner has a pillared kiosk with a dome. The parapet is adorned with numerous minarets and domes. The main hall is octagonal in plan and has a marbled floor of black and white tiles arranged in a chess-board pattern. The Nawab lies buried in an underground vault with his two brothers, just below the marked space in the main hall which runs north-south. The corridor behind contains the grave of three Begums of the Nawab. The graves on the eastern side are believed to be those of his three daughters.

The tomb of the Nawab’s Begum, Murshid Zadi, is built on the eastern side. It has four octagonal towers crowned by pillared kiosks with a dome above. The main hall has a verandah on each side. The parapet has a number of miniature domes and above the main hall are four octagonal corner domes and an elegant central dome. The underground vault contains two graves, one of which is that of the Begum and the other is said to be that of her daughter.

The tomb is an architectural beauty but only till a few months back it was sepulchred in dust, gathered over countless years. This is an ASI (Archaeological Survey of India) protected monument but only in January 2014, the authorities seem to have woken up to their responsibility to begin renovation work here. Better late than never! 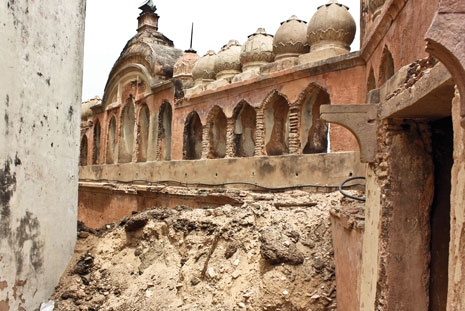 For many years, a small team of two guards, one janitor and one Quran Khwan, who recites the Quran for the dead, from the Hussainabad Trust had looked after the premises. Thanks to people like Prince Alim-ud-din Haider alias Jeo Nawab, the monument is now getting a facelift.

“The tomb had remained locked for many years. When I opened it in January 2014 the entire floor was covered with knee-high dust and bat guano,” Jeo Nawab supervisor of the complex of the twin tombs on behalf of the Hussainabad Trust told The Lucknow Observer.

There are four storeys including the crypt. Winding staircases connect the ground floor with the upper-storeys to reveal arched, well-ventilated corridors. The two domes include the inner one visible from the main hall and the outer bigger dome of the tomb.

These days, restoration work is in full-swing and is expected to be completed in about two years. Decades of neglect have made the plaster chip away from the walls and the mihrabs, or niche have developed cracks. Some stone slabs of the parapet are missing, while a tree has rooted itself in the parapet of Murshid Zadi’s tomb posing great danger to the structure.

Jeo Nawab, who traces his lineage to Bahu Begum, also a wasiqadar or pensioner of Awadh, laments the apathy of the government and more so of the people.

“People don’t seem to value the importance of these monuments, especially those struck by Cupid’s arrow. Even the ceiling of the underground vault is not spared where people, wanting to immortalise their love, have scratched their name and love notes as well as on the facade,” he adds.

The ASI in charge, Dilip Kumar Verma, disconnected the call when asked to comment on the nature of the restoration work going on in the twin tombs.

However, another official, on terms of anonymity says, “I have heard that Rs 300 crores are allotted for the restoration work. Even if Rs 100 crore is saved from the pockets of the corrupt, it will do wonders for the restoration of this magnificent tomb.”

Nawab Saadat Ali Khan lived in the Asafi complex for five years and then moved to Kothi Farhat Baksh after buying it from the French General, Claude Martin. The Nawab was poisoned and he died on 11 July 1814. It is believed, that he left Rs 17 crore rupees in the treasury. He was buried in Khaas Bazaar where the tomb stands today.