Call it what you like, Qahwa Khanas, Cafés or Coffee Houses, they have always served as an adda for the city’s denizens around the world, including Lucknow.

Here the haven of the city’s think tank is the Indian Coffee House on Ashok Marg. Established in 1940, the Indian Coffee House was started during the British rule by the Coffee Board. The connoisseur of books, Ram Advani, 94, says, “Before Independence the coffee house used to be where the present day Gandhi Ashram is located. It was managed by the Coffee Board then. After Gandhi Ashram was opened, the Coffee House was shifted to the Jahangirabad building or Jahangir Mansion, where it continues to brew aromatic coffee to date.”

In the early 1950s, the Coffee Board shut down all its coffee houses around the country and sacked its workers. Later the same sacked employees set up the Indian Coffee Workers Cooperative Society on August 19, 1956 in Bangalore, and consequently many coffee houses were reopened.

It was on 10 February 1958 when Lucknow’s Indian Coffee House saw the light of the day. It was inaugurated by the then Governor, V.V. Giri. It wasn’t just a brick and mortar space but an epicentre of much literary and political discourse. All the famous writers and politicians used to get together to exchange ideas over coffee. There were luminaries like Majaz, Ali Zaheer, Ratan Singh, Basheshar Pradeep, Ram Lal, Yashpal, Vidyasagar, Chandrashekhar, Veer Bahadur Singh, Amrit Lal Nagar, Bhagwati Charan Varma, Bishan Kapoor, N.D. Tiwari, Sibtey Razi, Abid Sohail, Lalji Tandon and many others who came under one roof at their fixed tables to indulge in discussions over the aroma of brewed coffee beans that wafted from the percolator to engulf the entire premises.

“In July 1962, I was appointed as lecturer at the National College and many of my seniors and I used to go to the Coffee House. Eminent English journalist and Majaz’s friend, Mr. Hajela, was a regular at the Indian Coffee House. Ali Zaheer Saab’s routine was to first relish a cuppa coffee here and then head towards the court,” says Abdus Salam Siddiqui, while remembering the good old days.

There was a time when the Coffee House was a center of Lucknow’s social, political and literary developments. The walls, the doors with stained glass panels and above all the coffee here, are all silent witness to history. In the last six decades, the Coffee House was shut down on many occasions for varied reasons like inability to pay electricity bills and sales tax, but every time a band of patrons like Bishan Kapoor, Rajnath Singh, Veer Bahadur Singh, Brahmadutt and others went an extra mile to get it reopened.

Today, politicians prefer the company of security guards these days to real people and writers have created comfort zones of their own, so the literary and political flavour of the Coffee House is lessened but not the strong intoxicating flavour of its coffee that continues to entice and beckon youngsters as well as oldies.

Indeed, a lot can still happen over a cuppa coffee!!

Have known the evenings, mornings, afternoons,
I have measured out my life with coffee spoons
-T.S. Eliot 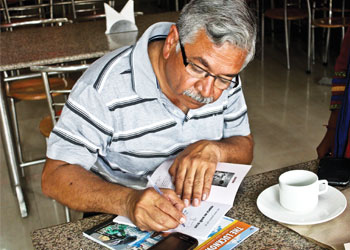 Eminent journalist Pradeep Kapoor is all for reviving the adda that the Indian Coffee House once was. This election season, he cannot help but remember the days of yore when hectic political parlance used to take place within the walls of this legendary café.

“UP decided and directed the nation but it was the Coffee House that decided and directed where UP was headed,” emphasizes Kapoor, whose eyes seem to wander in some distant past to times when the Coffee House was always abuzz with literary and political discussions. “The day Veer Bahadur Singh resigned as Chief Minister, I was present at his residence. When he went to the Governor’s House to hand over his resignation letter to the then Governor Usman Arif, he found that the latter was in Nainital at that time. He sent his letter to Nainital and then said, “Now I’m free…let’s go to the Coffee House,” says Pradeep.

Pradeep’s father and renowned journalist, Bishan Kapoor was a regular at the Coffee House every day between 11 am and 2 pm.

While Pradeep and I chatted over a cup of freshly brewed coffee with a heart pattern on the froth, some khadi clad men were engaged in an animated political discussion on one table while on another a group of youngsters played music and were having, what everyone here comes for, a good time and…coffee!!!