The chants of the saints, the ringing of temple bells, the flames of the Aarti, the fragrance of incense sticks, all build up a scene that looks not only mystical but captivating at the same time. The Magh Mela takes place at the Ghats of the river Ganga and Yamuna in Allahabad is a confluence of religion, culture and traditions.

Lakhs of people each year take a dip in the holy river of Ganga when temperatures dip down and the water of the rivers is icy cold. But nothing dampens the spirits of the devotees that travel from various parts of the nation to take the holy dip. Religious fervour and excitement warms up the atmosphere. The annual religious mega event of the Hindus not only attracts people belonging to the religion but the nation also witnesses a steady rise in the frequency of foreigners visiting the country during that period. 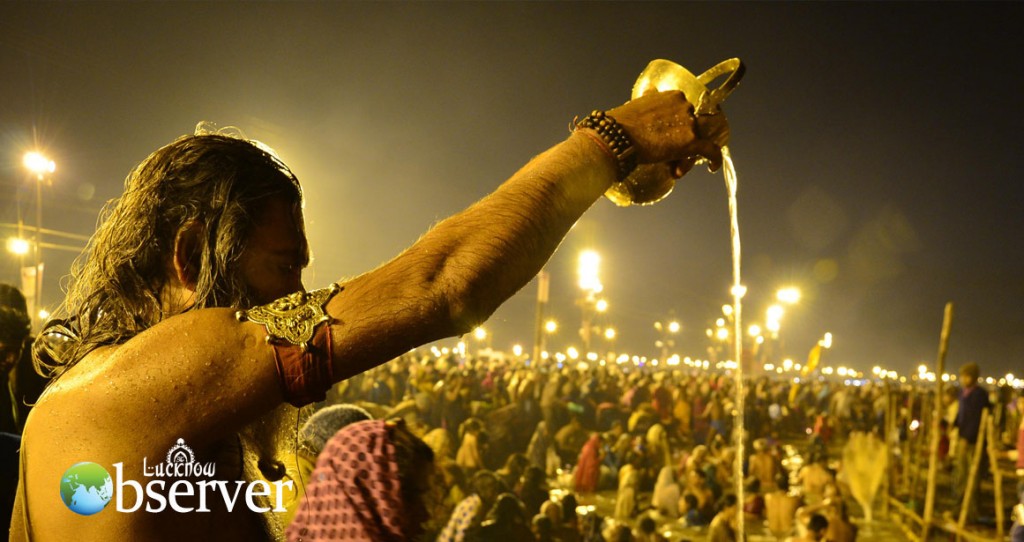 A cultural event organised by the NCZCC (North Central Zone Cultural Centre) titled – Chalo Man Ganaga Yamuna Teer – 2014” was a big hit amongst the kalpwasis and devotees. Despite the chilly weather and extreme cold, dancers and artists from various parts of the country performed during the event. The troupes that performed during the event consisted of dancers and artists who were actually maestros of their art. The Bihu dance of Assam was among the popular highlights of the event. Also the artists who came from Haryana performed to pay obeisance to Lord Shiva, their performance was called “Bamlahiri”. Songs were sung in the praise of the river Ganga and the atmosphere around the cultural pandal area was charged up by the electrifying performances of artistes from the seven states of the North East.

Apart from being one of the largest religious congregations of the world, the Magh Mela also has an interesting aspect to itself. People walking in and around the Mela premises felt that they came back each year not just for their religion and to seek salvation but each year they went back home with a bag full of treasured memories. These memories and the nostalgia attached to the city bring them back each year.

The aura of the Magh Mela can be witnessed at the Ghats, where people of different cultures, states, often nations, caste, creed and many a times also religion sit and watch the religious processions or pujas taking places. Magh Mela is not only a religious event but it is also a confluence of religion, culture and society. A month long religious event spread across acres of land lying at the confluence of the Ganga, Yamuna and mythological Saraswati, is an event that puts on display different hues of Hinduism.

Tourists from across the globe along with youngsters from across the nation throng the Mela area to experience mysticism, spirituality, religion and culture in a different way. On the first day of maker Sakranti it was reported that over 25 lakh people took the holy dip, while the numbers lowered to 11 lakh on the second day of the auspicious occasion.

Among the popular cuisines, pilgrims were seen enjoying hot cups of tea served in kulhads on most occasions and hot khichdi which is served free of cost in various akadhas (religious organisations that put up their camps in the Mela area). There are also interesting souvenirs and religious ornaments that are available for sale. Tourists can pick up a few of handmade incense sticks and copper vessels which are used to store the holy water of Ganga as memories of the Magh Mela.

Writer is from Allahabad, associated with newspapers and magazines.