Avadh has been mentioned in the Ancient Indian History as ‘Koshla’ with its capital at Sravasti and later on at Ayodhya. Though Sravasti, Ayodhya and Jaunpur were important cities of Avadh, Lucknow finds mention as ‘Lakhnoo’ as early as 1030 A.D. when Syed Salar Masood Ghazi passed through the precinct of Lucknow, namely Nagram and Amethi, which still exist.

The next invasion was that of Ikhtiyaruddin Mohammed bin Bakhtiyar Khilji, during the time of Shahab-ud-din in 1202 A.D. Ibn Batuta, the famous traveller had visited India during the regime of Mohammed bin Tughlaq (1325-1351 A.D.). He lived here from 1341 to 1349 A.D that is 742 to 750 Hijri. Lucknow has been mentioned in his Safarnama (travelogue). Ibn Batuta writes that Amir Ain-ul-Mulk was the ruler of Avadh, Jafarabad and Lakhnoo, which generally supplied big chunk of wheat, rice and fodder during the times of ‘Famine’. Ain-ul-Mulk revolted against the Sultan of Delhi but was suppressed by the Sultan with the assistance of Ibrahim Khan Tatari. At that time Ibn Battuta was in Lucknow on way to Bahraich. Qutub-ud-din-Aibak established slave dynasty at Delhi in 1206 A.D and Iltutmish ascended the throne in 1211 A.D. During the reign of Iltutmish (1211-1236 A.D), Bengal and Bihar were independent states and Ali Mardan had declared himself as the independent ruler of Lakhnauti (Lucknow) in 1208 A.D. after the death of Qutub-ud-din. The disintegration of the Delhi Sultanate witnessed the establishment of the dynasty of the Sharqi Sultans of Jaunpur in 1393 A.D on one hand and rise of the Bhars on the other, who occupied the western part of Lakhnoo. Lakhnoo was still the trade and business centre during those days.

Babar invaded India in 1526 AD and killed Ibrahim Lodhi in the battle of Panipat. After the establishment of his rule, he divided India into fourteen provinces. There were many small Sarkars under Lodhi administration. All the Sarkars in this region were included in the province of Avadh created by Babar in his list of states. Lucknow still existed with the name of Lakhnoo. Biban, the Lodhi strong man revolted at Ayodhya. On February 2, 1528, Babar set out on the eastern campaign against the Afghans and Biban, who had earlier defeated the Mughal Army in Ayodhya and seized Lakhnoo. Biban was dethroned and imprisoned by a confidante of Babar named Mir Baqar Isfahani.

After Humayun ascended the throne Lakhnoo became a soft target for invaders. In absence of Humayun’s administrative control, they had marched triumphantly towards ‘Lakhnoo’ and forced Sultan Junaid Barlas, the Mughal Governor of Jaunpur to retire. Humayun, after being defeated by Sher Shah Suri in 1540 A.D, had taken retreating route through Lucknow. He stayed here for four hours only and was amazed to see that the people of Lucknow were such good hosts. In a short span of few hours residents of Lucknow presented him a purse of Rupees 10,000 and fifty horses.

The Empire of Akbar was divided into fourteen provinces and Avadh (Audh or Oudh) was one of them. Lucknow was one of the most important places in Oudh and the seat of Government during the rule of the Mughals. It is described in the “Aina-e-Akbari” as a large city pleasantly situated upon the banks of the Gumty and its suburbs were delightful.

Iskander Khan of Lucknow revolted against Akbar in 1565. Akbar immediately sent Munim Khan to Asif Khan’s aid, to crush Iskander Khan after which Akbar set out from Akbarabad (Agra) on May 24, 1565 with a large force. He joined Munim Khan at Kannauj and made a rapid march onto Lakhnau and forced Iskandar Khan to leave the place.

Lakhnau held much importance for Akbar. When some trouble erupted in Badakhshan, Khwaja Ashraf Naqshbandi and Sheikh Husain of Lucknow, who were the envoy of Akbar, were sent to Abdullah Khan of Badakhshan. Meanwhile Todar Mal and Mohammed Quli Khan Barlas besieged Iskandar Khan in Avadh. Mohammad Quli Khan remained here (at Lakhnau) untill March, 1572 when through the intercession of Munim Khan, Iskander Khan obtained pardon and was granted Lucknow as his fief where he died shortly after.

Mirza Saleem Shah, later known as Jahangir, visited Lucknow in 1586, when Jawahir Khan was the subedar and Qazi Mahmud Bilgram, his deputy. During the time of Jahangir De-Lact called Lakhnau a ‘magnum Emporium’.

During the period of Jahangir, Sheikhzadas of the region took hold of the area and made Jaunpur its capital. Prior to that the period of disintegration of the Delhi Sultanate witnessed the establishment of the dynasty of the Sharqi-Sultans of Jaunpur on one hand and the rise of the Bhars on the other, who occupied these territories that now lie in Kanpur, Unnao and the western part of Lucknow. This was the time when Daryabad and Bijnor were well populated and larger towns. The artists and musicians like Najja, singer Mughaljan and the poets were very popular in Delhi Court. Lucknow was still a politically important place. According to Rahmat Ullah Bijnauri, Raja Sethna attacked Lucknow sometime in 1458, Sheikh-ul Islam Hazrat Makhdoom A’zam Sanni Kirmani assembled his family members and other followers, and other Sheikhzadas offered such a stiff resistance that Raja Sethna had to retreat as a loser.

The Sheikh dynasty produced noblemen and subedars of repute at Lucknow. Sheikh Abdur Rahim a nobleman of Bijnaur was entrusted with the domain of Lucknow. Yet the documents itself speaks enough to show that there was no city called by the name of Lucknow; history was being recorded by the Qasbat and their habitations.

Kamal Uddin Haider, in Swaneh Hayat of Salateen-e-Avadh, described Sheikh Abdul Rahim, as a noble man, whose tomb is situated at Nadan Mahal Road, and was a resident of district Bijnaur near Moradabad. Historians like Fakhir Husain and Satish Chandra are also of the same opinion. However, H.A. Qureshi disagrees with them.

“It is of paramount importance that we ought to study the lives and careers of the Qasbati elites and the groups if we want to know and appreciate the history of any region or period.”

No doubt, Qasbat like Kakori, Bijnaur, Nagram and habitations like Lakhnawati, Lakhnoo or Lakhnau existed and the habitation Lakhnau was the centre of agriculture and trade and was the biggest supplier of wheat, rice and fodder of the region to the Sultans of Delhi. Lucknow came into prominence when Mohammad Shah, Emperor of Delhi, appointed Saadat Khan Mohammad Amin the Nawab Wazir of Avadh and Akbarabad (Agra) in 1722.

Saadat Khan was appointed the Subedar of Avadh on 9th September 1722. He found it to be a land of semi-independent feudal barons of varying degrees of strength and political importance. The same year in 1722 Saadat Khan marched to Lucknow, crossed the Gomti river at Gaughat and captured the city from the Shakhzadas, who had defied the might of the empire since the days of Akbar the Great, and pulled down (or as some say, cut down) the naked sword at the Sheikhan Darwaza (the main entrance to the fort), to mark their prowess and defiance and took possession of their palace.

Dr. Roshan Taqui
Writer is a Lucknow based historian. 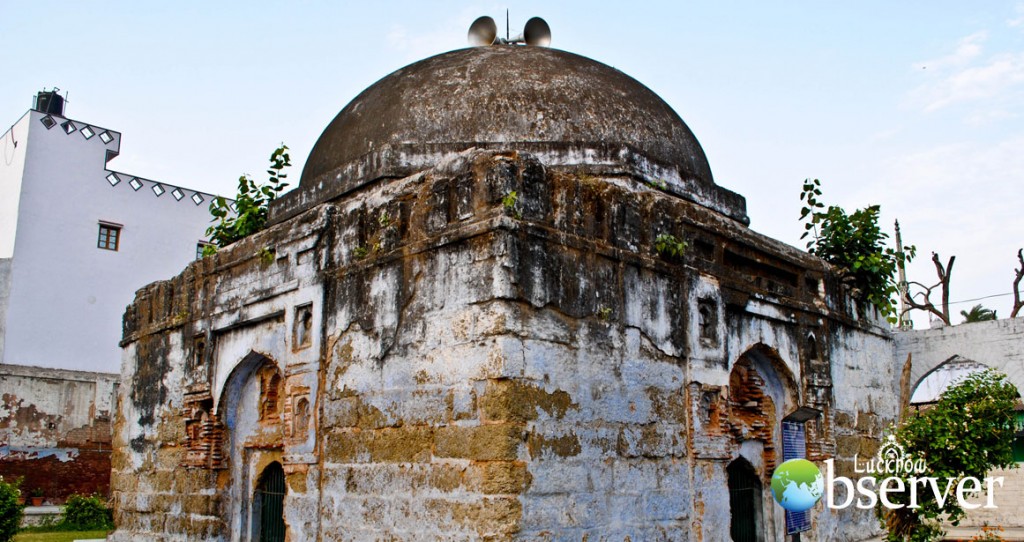