The Building Blocks of Lucknow

Lucknow monuments are trademarks of 17-18th century Awadhi architecture of Northern India, which are a kind of masonry structure of grand proportions. Before Independence, Awadh was a region in the centre of Uttar Pradesh; and its capital, our very own city of Nawabs, Lucknow. Saadat Khan Burhanul Mulk laid the foundation Awadh Dynasty. It was the fourth Nawab, Asif-ud-Daula who shifted the capital from Faizabad to Lucknow.

During his reign, Asifi Imambara and Rumi Darwaza were built, which till date are the prime architectural marvels of the city.

Lucknow monuments which date back to 17-18th century are enormous masonry structures built using thin burnt-clay bricks (lakhauri) and lime-crushed brick aggregate (surkhi) mortars. The conventional material engaged during this period was brick and plaster which was a locally accessible material and much less cheaper and speedier to use than the stone used by the Mughals. Lakhauri bricks descend their name from the massive quantities in which they were manufactured for building activities during 18th, 19th and early 20th century. The bricks were called lakhauri for the reason that their number was always in lakhs; The open kiln in which they were made was called pajawa (from pajawagars). Lucknow monuments use thin burnt clay bricks (lakhauri) and lime-crushed brick aggregate (surkhi) mortars. Lakhauri bricks are flat, rectangular bricks with typical sizes of 100 mm ◊ 150 mm ◊ 20 mm and 100 mm ◊ 150 mm ◊ 50 mm. The crushed brick aggregate was used with lime for mortar preparation which has great influence on its final strength, as surkhi also acts as a hydraulic binder to some extent. The thickness of horizontal and vertical mortar joints are about 20-30 mm and 10-20 mm respectively, in various Lucknow monuments. 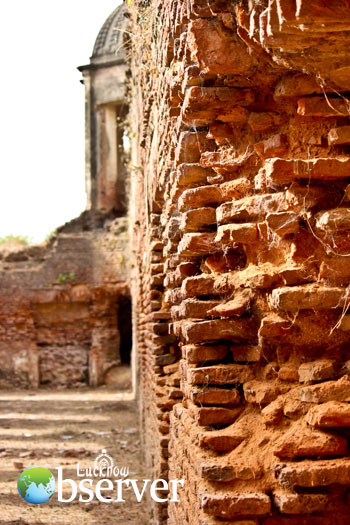 The bricks were both sun dried and kiln baked, but mostly kiln baked “lakhauri” bricks were used which are only nineteen millimetres thick and normally about ten centimetres by fifteen centimetres. A larger and heavier brick of the same clay but almost five centimetres thick known as ‘Pan Patta’ was also used. But broadly we can term the Nawabi era as the ‘Lakhauri Style’ when the brick, due to its small size and thickness has been cleverly used by the local masons to form remarkably fine details on the wall and column surfaces. This made the work easier for the stuccodars who could then concentrate on delicate work instead of covering vast areas with stucco to mimic stone effect. Stucco could be used to produce effects in deep relief even when applied to a flat wall with a variety of motifs ranging from floral designs, false arches and false domes, producing an exceptional surface articulation of walls, columns and ceilings. In fact, the exceptional technical skill of workmen using brick and stucco are the redeeming features of this phase of Nawabi architecture. But this stucco work has suffered badly with the ravages of time and white washing.

The lofty gateway of Bada Imambara Complex, popularly known as Rumi Darwaza, is built of lakhauri bricks, lime plastered and decorated with plaster mouldings with infrequent use of stone. The gateway takes the form of a gigantic wide archway along with double-storeyed octagonal pavilion on either side while the parapet has a splendid faÁade of multi-foiled arches in a row along with a number of miniature domes. The gateway of further divided by three intermediate size arched gateways in a semi-circular fashion, while there is another structure when viewed from the east side on top of the gateway, which shows a set of five doorways on each wall. The roof is of this geometric structure concludes in a small platform crowned by an octagonal chhatri of red sandstone.

Tomb of Murshid Zadi was built by King Ghazi-ud-Din Haider for his mother Murshid Zadi, wife of Nawab Saadat Ali Khan. It shares the spot of residential compound where Ghazi-ud-din Haider lived as Crown Prince. Square on plan, it is built of lakhauri bricks laid in lime mortar and decorated with plaster mouldings. It has four octagonal towers topped by pillared kiosks with dome above. The main hall has a verandah on each side. The parapet has a number of tiny domes. Above the main hall, are four octagonal corner domes and an elegant central dome. The concealed vault contains two graves, one of which is that of the queen and the other is said to be that of her daughter.

Tomb of Amjad Ali Shah, located in the western part of the Hazratganj, it is also known as Imambara of Sibtainabad. It was constructed by the last ruler of Awadh, Wajid Ali Shah over the grave of his father King Amjad Ali Shah. Within an enclosure wall, stand, the main Imambara building, mosque and a rectangular hauz, entered, through two lofty gateways. It is built of lakhauri bricks in lime mortar, lime plastered and decorated with fine plaster mouldings. The Imambara stands on a platform approached by two flights of steps and consists of a central hall and two other rooms on either side along with a raised platform for housing tazias and other ritual objects. Its arcaded peripheral wall and ceiling are decorated with floral and geometrical design in coloured stucco.

Musa Bagh, was originally, laid out during the reign of Nawab Asif-ud-Daula at the right bank of river Gomti. However, the main palace complex is supposed to have been constructed during the reign of Nawab Saadat Ali Khan in European style of architecture. The building and the enclosure wall with gateway were built of lakhauri bricks, lime plastered and decorated with beautiful stucco mouldings. It was basically a four- storeyed rectangular structure on one side and two-storeyed on the other side, having spiral staircases on either side with flutted domes. The building is approached by a semi-circular flight of steps from northern side.

Musa Bagh has great historical importance since it was the last stronghold of Begum Hazrat Mahal, wife of King Wajid Ali Shah and Prince Birjis Qadar in their struggle against the British. In the fierce fighting at Musa Bagh, a British Officer known as Captain Wales was killed and buried here in front of the ruins at a place marked with a grave inside the monument. Recent excavations here have exposed the complete plan of this building, its approach from the river side and material artefacts of contemporary period.

Historical buildings and monuments are a part of cultural heritage and deserves preserving. Therefore, civic societies and governmental agencies should pay more attention to their maintenance and preservation to protect them for the enjoyment of future generations.

A student of architecture, the writer is a history buff and loves to study about historical monuments. 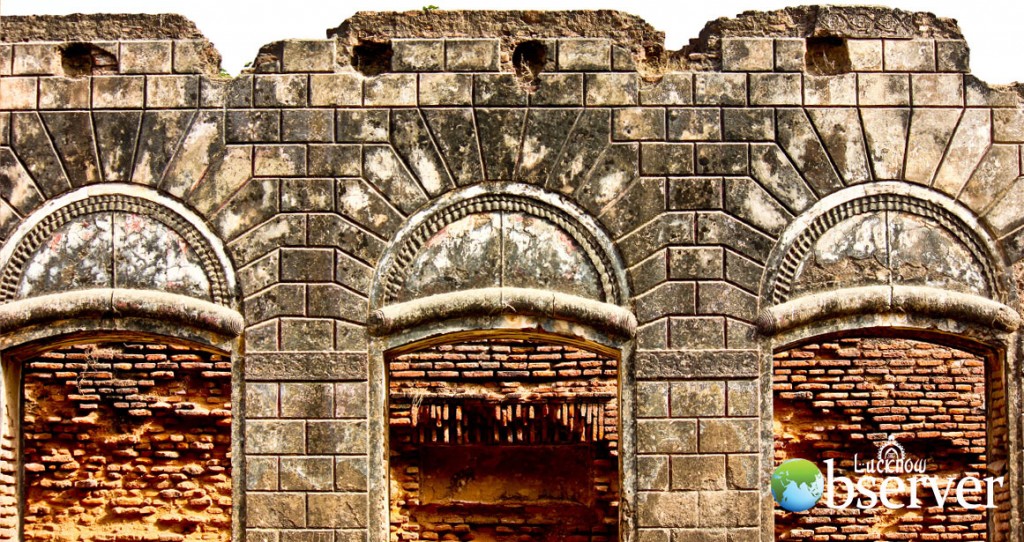