The Mughal Architecture brought into being, the tradition of building art. In its early phase, that is, till the third quarter of the eighteenth century, Shahjahanabad remained an ideal to emulate. The tomb of Safdar Jung at Shahjahanabad was a symbol of the growing power of the Nawab Wazir at the centre. The buildings of Faizabad were also heavily influenced and derived by the later Mughal architecture style. These buildings are where Shuja-ud-Daula decided to settle permanently after the Battle of Buxar.

It becomes interesting in view of the fact that Shuja-ud-daulah showed keenness to employ Polier as an architect and engineer. Despite being well acquainted with the European style of Architecture, the building of Faizabad had no bearing of European Architecture. Polier was placed in charge of superintending and directing only the fortification work. The fortification was planned by the Nawab himself.

However in the last quarter of the eighteenth century, European influence began to show itself in the building art and a number of European style building were constructed during this period, such as Farhat Baksh, Asifi Kothi, Constantia and the Bibiyapur Kothi. From now onwards European elements continued to infiltrate increasingly into local architecture.

Nawab Asif-ud-Daula had great admiration for European style buildings, and soon after his accession he is said to have requested the Resident, John Bristow, to ‘produce him the plan of a house after the European taste’. It is on record that one such house was designed and erected for him by an engineer, Captain Charles Marsack. Further details about this house are not available. Claude Martin designed for Asif-ud-Daula a town mansion, the Asifi Kothi and Bibiyapur Kothi, which was a country house. Asifi Kothi was located in the Dulat Khana palace complex. Bibiyapur House (Bibiyapur Kothi) in Lucknow is located on the right bank of river Gomti on the south east of Dilkusha, shielded from view by the Government Dairy Farm. It was built by Nawab Asif-ud- Daula (1775-1797) for the purpose of hospitality and welcome of his European guests. Antoine-Louis Polier drafted Bibiyapur Kothi in neoclassical architectural design with assistance of General Claude Martin. It comprises of commodious halls, which were ornamented with white and blue European tiles. A high roof with wooden beams was also rendered to it that added to its grandeur. It also had spiral staircases that were put to use for the first time in India.

Arched doorways lead to the inside of the Kothi. The building is constructed on a rectangular ground plan with lakhauri bricks laid in lime mortar and coated with thick lime plaster. The upper floor of it had many cylindrical pillars. A little distance away, a water tank, which had a capacity of 80,000 gallons of water, was constructed for being used in the royal kitchen. This Kothi was used by the Nawab’s European guests for their recreation. The Nawabs used this place to entertain their European guests. The royal family and European guests also used it as a hunting place.

Moreover, it holds a major political importance as well. It is the same place where Nawab Asif-ud-Daula’s son Nawab Wazir Ali Khan shot Captain Cherry who was the army officer of the Residency at that time. This incident took place a day after the death of Nawab Asif-ud-Daula, when the Britishers had denounced Wazir Ali Shah and refused to accept him as Nawab Asif-ud Daula’s heir’, states Mr. Roshan Taqui, an eminent Historian of Awadh. After the demise of Nawab Asif-ud- Daula in December 1798 AD, a Darbar was held here and Sir John Shore (afterwards Lord Teignmouth), declared Saadat Ali Khan as the rightful successor to the throne on 21st January 1798. After the annexation of Awadh in 1856 A.D., the British, particularly by army officials for various celebrations, frequently used the place.

As in case of many heritages and monuments of Awadh era, the Bibiyapur Kothi has gone through a rough patch in time and no exception was made while neglecting it. The same place, which once frequently had so many visitors, now stands abandoned. The walls, which once embraced laughter, are now succumbing to despair, so much so that the name ‘Bibiyapur’ itself has hardly been heard or mentioned for some time now. However repair work is in process at Kothi but without proper care and preservation, this repair work shall only delay the Kothi’s impending doom, not avoid it altogether.

Writer is the Editor In Chief of The Lucknow Observer 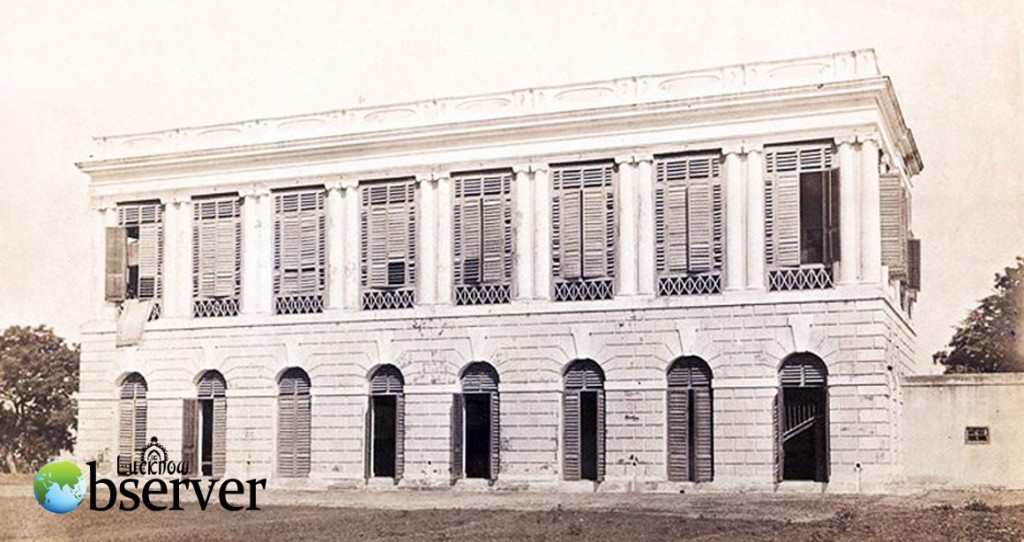