How could one feel when he just puts on the journalism shoes and encounters none other than the man himself, Mr. Vinod Mehta. It was a Saturday afternoon on the 24th of March 2013 at around afternoon, occasion being the second day of the first ever Lucknow Literary Festival at Indira Gandhi Pratishthan when suddenly the news came in that Mr. Vinod Mehta had arrived and the scene was chaotic for those who knew who he was and what kind of charisma he carries with himself. Honestly, I was too naive to handle his welcome but he was too simple and easy-going to even give a hint of his stature.

He was sitting on a couch with great comfort and larger was his comfort talking about his works and throwing light on his association with Sanjay Gandhi and the tumultuous time that the country was going through at the onset of emergency. Each word coming from his way had the stamp of authority and people in the hall were spellbound with his narrations and easiness of the handling of the questions being put up by the audience. That was my first and unfortunately only interaction with the genius wherein he taught a very simple lesson that greatness might emerge from a very common man also. 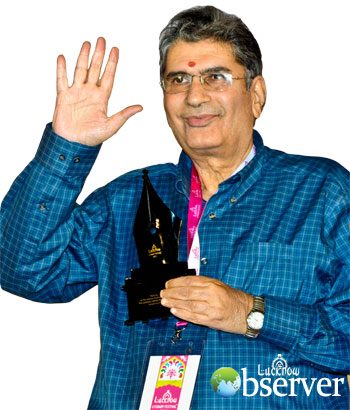 An interesting incident took place during the course of his session at the festival, while he was occupied with the questions being posed to him and the sitting was in its full swing, suddenly another round of whispering erupted that Mr. Naseeruddin Shah had arrived for the following session and the most serious of the audience could not resist the essence of glamour and people made a mistake of diverting their attention to the master of celluloid. As the luck had in store, we witnessed another mood of the genius Vinod Mehta who refused to continue as people were distracted and the focus was partially shifted. With due respect Mr. Naseeruddin Shah, he was very straight forward that his session should be curtailed because people might be more interested in ‘filmy’ talks rather than serious journalism. It was perhaps the first real test of being a host that I approached Mr. Vinod Mehta and offered apologies for anything that might have distracted him.

But he was truly a great editor and he demonstrated his mastery with his trademark wit and simply announced that sincerity of the audience is not the commitment of the organisers. Probably, it was a very humble message to Mr. Naseeruddin Shah who took a vacant seat in the third row and got himself engrossed in a very interesting discussion that was on. The Lucknow Boy enthralled the audience with his unique style, a style that would always remain very close to hearts and minds.

Alas, all this ended up so fast and untimely. We could only say Good Bye …. Lucknow Boy