Lucknow School of Poetry has special place in the heart of every person who appreciates literature. It enjoys the distinction of being as one of the richest tradition which developed the finest Urdu poets like Meer, Atish, Nasikh, Sauda, Hasrat, Josh, Majaz and the never ending list. Tradition of Mushaira is as old similar to poetry, however Ghazal singing is another art which flourished mostly in 20th century which is primarily attributed to the Royal sittings that eventually flourished at ‘Kothas’. We are fortunate that Begum Akhtar pioneered the art and that gave her the title of ‘Malika-e Ghazal’. She is considered as top rank singer in Ghazal, Dadra & Thumri. She has been awarded with numerous prestigious awards like Sangeet Natak Academy Award, Padma Shri, Padma Bhushan. Poetess Sarojni Naidu appreciated her singing when she was just teenager. 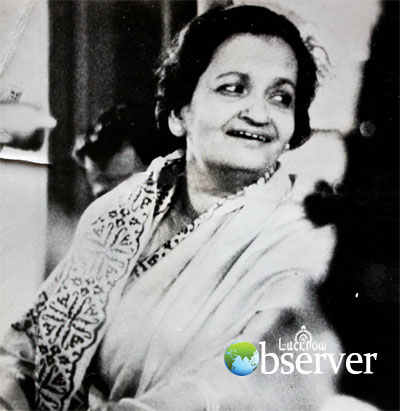 Born as Akhtari Bai Faizabadi ( 7th October 1914 – 30th October 1974 ) to proud parents Asghar Hussain and Mushtari , this year being her birth centenary is a very special year for every Lucknowite and one who loves music. Her Ustads at various levels were Ustad Imdad Khan, Ata Mohammed Khan, Mohammad Khan, Abdul Waheed Khan and Ustad Jhande Khan.

She started giving public performances at the age of fifteen years. Theatre was also her career for a short time. She also acted and sung for the movies and Mumbai was also her home for some time.

However Lucknow never left her and she also could not live in another city. Her marriage in 1945 to Ishtiaq Ahmad Abbasi is a milestone as she stopped singing for five years on her husband’s objection. Her life can be compared with Umrao Jaan Ada, the famous character of Mirza Hadi Ruswa’s novel; both born in Faizabad and reached the zenith of their career in Lucknow.

Their profession can be called as courtesan, however both have developed a niche for themselves. Umrao and Akhtar have contributed a lot in the cultural development of Lucknow. Her contemporary poets felt lucky when Begum Akhtar had given voice to their compositions. She was admired by poets like Jigar, Kaifi, Shakeel and many others from India and across the border.

LUCKNOW Society paid tribute on the 100th birth anniversary at 2nd edition of Lucknow Literary Festival on Feb 2014 by organizing Ghazal evening dedicated to Begum Sahiba. Audience was mesmerized by the show and everyone was only singing the following couplet of Meer Taqi Meer, a master composition by Begum Akhtar : 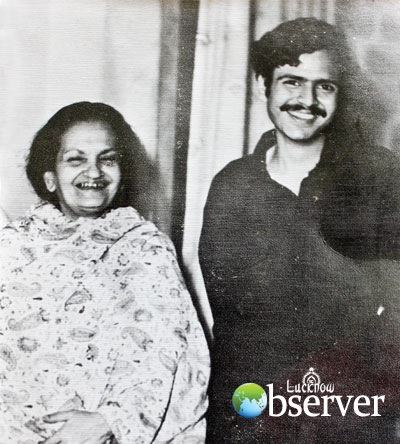 All thanks to the efforts of Sanatkada that her grave at Pasand Bagh near Thakurganj has been renovated recently. Madhvi Kukreja organized a Ghazal evening there in 2013 and the tradition is expected to continue every year. Saleem Kidwai is of the opinion that she was also very brave and developed her Kotha near Hazratganj, by not selecting the old city. October month is to be celebrated as music festival across India and it will also spread secular harmony and traditions of Lucknow.

Shakeel Badayuni has penned the famous song, ‘Yeh Lucknow Ki Sarzameen…’ and we are very proud of the song as well as about our city. Although the city proved to be very weak in paying back the tribute to its legends and it is becoming a common story, the same is the case with Begum Akhtar. She deserves a lot more from the city…. her home in Lucknow was at Havelock Road near Vidhan Sabha and nothing is left now there. Her home in Faizabad is in shambles and the authorities must develop it as a museum of music. Road in front of Pasand Bagh should be renamed as Begum Akhtar Road this year as a small tribute to the legend. Another Ghazal from Shakeel Badayuni which was beautifully sung by Begum Sahiba tells the story….