A Religious Monument with a Social Message

Chowk lane is famous for Tunday Kababi, Chandi Ka Warq, Phool Wali Gali, Gota, Chikan, Zardozi, Ittar, much more and the historical Tehsin Ki Masjid. The view of this mosque from a distance showcases three domes, out of which the middle one seems to be of a greater height than the ones at the extremes possessing equal height. Each of them have narrow, regular ribbings and at the peak of each dome is mounted an ornamental narrow rod which points at the sky. Built in Indo-Islamic style of architecture, the high minarets, turrets and carvings on the walls beautify the facade of the mosque. Three multi-arched gateways present at the front face of the structure lead to the interior of the mosque. The mosque is named after Tehsin Ali Khan.

In the era of the Nawabs, the begums were usually kept within the periphery of Khurd Mahal, which was a separate abode for the women. The only link available to the begums was the services of the eunuchs. The chief of these eunuchs was called Khwajasara. Owing to the role the Khwajasara played, he was often deemed important and influential. Tehsin Ali Khan was a Khwajasara. He managed the Khurd Mahal in which Bahu Begum, wife of Nawab Shuja-ud-Daula, was kept at Faizabad. He was later made the daroga of the Toshakhana and took care of Nawab’s personal assets and belongings. With the prior favors he acquired from the Begum and then the trusted post of the supervisor of the Toshakhana, he became an absolute favourite of the throne, both the Begum and the Nawab.

Tehsin Ali Khan had an inn and a mosque as his property along with some other assets but he did not have an heir to his belongings. Therefore he, in his will, named Sir John Baillie as the receiver of all his belongings after his death. The will came into effect on Tehsin’s death on 27th August 1818. According to his will, Sir Baillie also built a mausoleum on his grave, which later turned into an Imambara. 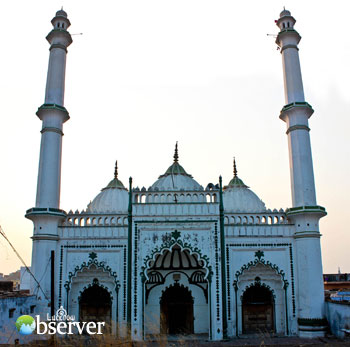 The story behind the construction of Tehsin Ki Masjid is as fascinating and magnificent as the mosque itself. “When the Bada Imambara was getting constructed, Tehsin went to Nawab Asaf-ud-Daula begging to allow him to take away all the debris which was obtained when the noblemen who did not wanted to be recognized as labourers were called after the sunset to demolish the raised structures. Nawab allowed him to haul this rubble and later with the same rubble Tehsin Ali Khan had successfully built a mosque which is now popular as Tehsin Ki Masjid.

Reportedly, the construction of the Asafi Imambara was also a famine relief agenda for the masses to offer them the employment. This also included the famous nobility who wanted to avoid recognition. For this purpose of concealing their identity, they were summoned after sunset. However, the lack of skills in the nobility created futile construction, which needed to be demolished after sunrise. This constant demolition and construction produced a lot of rubble, which was used by Tehsin Khan for the Mosque. While offering his service to Nawab Asaf-ud-Daula, he became so much attached to the Nawab that on his death, he decided to quit all the earthly belongings and spend the rest of his life as a keeper at Nawab’s grave. On seeing his state, Nawab’s son Wazir Ali Khan offered him a proposal to become the Naazir of the Royal palace, which Tehsin Ali khan had later accepted. But they didn’t succeed in maintaining a cordial relation for long and thus ended up parting ways.

Presently, the area of the mosque is eaten up by encroachment of numerous shops and houses. Moreover, the lane in which the mosque exists is quite narrow and lies in such an interior of the area that it becomes difficult for the visitors to locate it.