A Glimpse of Mughal Architecture

On the bank of river Gomti near the Hardinge Bridge, most popularly known as Pakka Pul or the Laal Pul, stands a beautiful mosque known as the Jami Masjid or Teele Wali Masjid. The exquisite monument is surrounded by the Bada Imambara, Rumi Darwaaza. The entry to the campus of the mosque is adjacent to the Laal Pul. This mosque has been attracting thousands of Muslims not only from Lucknow but from adjacent cities and states. On the occasion of Namaaz-e-Alvida or Juma’tul Vida (the last Friday of the Holy month of Ramzan), the number of people attending the prayer is considered to be the largest in the city. This beautiful mosque was constructed by the Mughal governor during the reign of Emperor Aurangzeb (1658-1707). Like many other Mughal monuments in the city, the exact date of construction of the mosque is not specified. 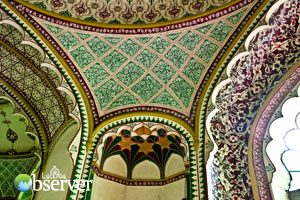 The mosque stands on a mound or a Teela and that is why it is called as Teele Waali Masjid which means the Mosque on the mound. It is stated by few historians that the mound was formed when the Britishers bombarded the eastern gateway of Bada Imambara in the year 1857. The mosque must have been built as the main mosque to provide to the religious needs of the people of the Mughal localities which were built during the Mughal reign. It is also considered that the mosque would have been built for scholar-saint Shaikh Pir Muhammad, who attracted a number of students of higher studies not only from India but also from various other countries. 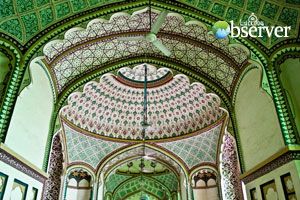 The mosque has three domes and tall minarets which are visible to anyone who takes a look at the mosque. The mosque is raised on a platform made of brick and stone and has a courtyard with a widely spread prayer area which is divided into three compartments amongst which the central one is comparatively larger than the two on either side. In the same manner, the central dome is larger and higher and is crowned by an inverted lotus on the top of dome. The most fascinating feature of the mosque is its large balcony of the Bengal variety above its central arch. The mosque has a typical Mughal architecture, taking the very large balcony of the mosque as an example which is very common in many mosques built by the Mughals. This specific feature of the mosque later became a very popular feature in the construction of many Sikh Gurudwaras.

In the campus of the mosque, Tomb of Shaikh Pir Muhammad hardly twenty meters to the east of the mosque stands the Tomb of Shaikh Pir Muhammad, who died in the year 1674. Shaikh Pir Muhammad was a very prominent Islamic scholar and inspired a large number of people from around the world. He was born in the village of Itawan, a village in Jaunpur district in 1619. He was the follower of Sheikh Abdullah Chishti, Sayyah Dakkhini. He spent his whole life in the study of religious doctrines and scriptures. He played an important role in guiding his pupils for the interpretation of theological matters. The tomb is built on a raised platform and has a bulb shaped dome which is crowned by a lotus-bud like finial and is raised on four wedge shaped structure. On the top of the bulb shaped dome, there is a chiragdaan or lamp-stand. The square shaped tomb has only one entrance, which is to the south. The entrance has a tablet on which the date and the name of the scribe have been scripted in the Naksh script.

Towards the west of the tomb, a beautiful sarcophagus of marble stands, which is considered to once have inlay work in semi-precious stones. The tomb is said to be of a Mughal official, although there is no authentication of the aforesaid.

The mosque is surrounded by fields on its all four sides. These two monuments are considered to be important as they are amongst the last group of monuments built by the Mughal dynasty in Lucknow.

Arqam Fazal Mirza
Writer is a student and aspiring author