Fathima is Afreen’s daughter, a widow who earned her livelihood by working as a Chikankari artist in Lucknow. Fathima is not a Chikankari artist like her mother but is working in a call-centre. Farmer’s son doesn’t want to be a farmer, tailor’s son doesn’t wish to be a tailor, and cobbler’s family doesn’t have anyone to work in that field after him. The same goes for pottery, marble products, handicrafts, jewellery, brass product and silk, glass and leather goods.

Fathima was only a few months old when her father died in an accident. The responsibility of the daughter was on Afreen. Belonging to a family of Chikankari artists Afreen was good in this art. After being financially exploited by the middlemen and high profile businessmen, Afreen decided that Fathima will not be a part of this, instead she send Fathima to school and allow her to gain a degree. She did not wanted Fathima to be in the same profession as she was aware that there is neither any security nor profit in this profession.

Fathima is just like millions of other youngsters in Lucknow and other parts of India. Youngsters are not going into the traditional jobs and prefers going for a high-profile jobs as engineers and managers in MNCs, or many other such jobs. It is very rare to find youngsters telling you that they are working as a farmer, or Chikan and Zardozi artists, or any such traditional jobs, which were famous till a few decades, back. Youngsters prefer to be unemployed than to go for these jobs.

If we talk only about Lucknow, during the Nawabs and even after that the economy of Lucknow was highly dependent on the traditional jobs like farming, small-scale industries based on the embroidery- Chikan and Zardozi, kite-making, and ittar. Handicrafts such as earthen toys, khadi production and jewellery making were among others. Only a very small section of people were going for government or private jobs for their livelihoods during that time. But now we hardly find youngsters around us doing such traditional jobs.

When asked Fathima why she is not into the Chikankari, she replied, “My mother was never able to make good money although she worked more than 15 hours a day for this. Not only she but also I know many who are struggling to get a basic standard of life after working for these many hours. They don’t have any job security and it’s the middlemen who get the money. The worker or in reality the ‘designers’ are not at all paid. We all know the rate of these works in domestic and international markets but we don’t know the sufferings of the workers. The government also doesn’t care about them.” 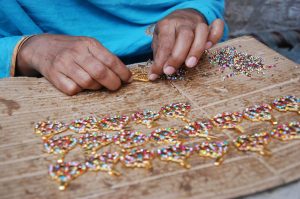 The main problem with youth losing interest in such jobs is that we don’t have people who will take these arts forward. Day by day lesser number of people are left for these jobs and there will be a day very soon when there will be hardly anyone to do many such important and artistic works. There was a time when we could get everything at our doorstep without the help of Internet or apps. That was the time of pheriwallas, but now we need apps and Internet to call for grocery, vegetable or for many such things because no pheriwallas are visible nowadays. Tughra, a type of calligraphy is one such sufferer. The art is suffering from the fact that there are only countable numbers of people involved in them now. The list is endless.

A lot has to be done to attract the youngsters back to these professions as most of the art forms continued till now because the younger generation inherited them from their ancestors. The government, particularly, has to take serious steps to attract the youth to such job options. These professions are not only professions but alsoa crucial part of our culture and history. Losing them will mean we are losing our culture and history. Education is the most important thing for youngsters. After gaining education, when they go back to the traditional jobs they will have a modern point of view and can experiment with the traditional arts.

Internship is a crucial part of all form of jobs nowadays. This is done to help the newcomer in the industry to have a proper understanding of the working and functioning of that industry. The same can be done to absorb the huge lot of unemployed youth in our country. They have education, but not proper jobs. They are not master of any skill, but if trained in such traditional jobs, they can be an asset to the country. They will not only do something useful from their lives, but will help in preserving the culture and history of the states and country. 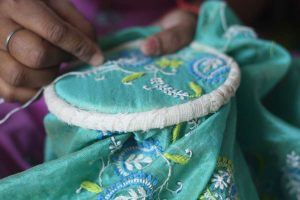 Along with the graduation subjects, we can also introduce various traditional job trainings so that by the time a young girl or boy is graduate she/he also became a master of these jobs. This will not only help in increasing the number of people involved in various traditional jobs, but will also help in supporting those who already master the profession. They will be teachers and mentors of hundreds of the newcomers. For example if a university is also teaching the chikankari skill in the university, people like Afreen will not only remain as a worker, but will be respected as a teacher also. They will not only gain respect, but can earn little more.

Another major problem with these jobs is that they are not considered as “cool”, but if the educated youth will turn towards these job profiles, a lot can be done to improve the present situation. The mind-set of people will also change with the passage of time. If nothing is done, many of these traditional job forms will remain only in history books. The coming generation will only be reading about them, but will never be able to witness or opt for them, as there will be no one to teach them these art forms. It’s high time that we should plan for the future with our history and culture as our guiding posts.

Nivedita Singh
Writer is a student and is passionate about music culture and literature.