The Secular Face of Nawabi Era

Raja Tikait Rai Bahadur (1760–1808) was the Diwan of Awadh from 1791 – 1796 in the regime of Asif-ud-Daula. He was a learned Kayastha of Saksena clan, Raja Tikait Rai commanded the highest positions comparable to that of Raja Newal Rai, among the Hindu Diwans of Asif-ud- Daula. Raja Tikait Rai founded the towns of Tikait Nagar, Barabanki district and Tikait Ganj, Raebareli district. He was the successor of Haidar Beg Khan in the post of acting minister. In his youth Haidar Beg Khan Naishapuri, a military officer under Safdar Jung, had employed Tikait Rai.

Later he became diwan of Khushnazar Ali Khan Khwajasara, superintendent of the armory (Darogha-i-Zanburkhana) in Shuja-ud-Daula’s Government. During the ministry of Mukhtar-ud-Daula, Tikait Rai was promoted as a clerk in the civil court and after Mukhtar-ud-Daula’s murder, was appointed assistant to Mir Hasan, supervisor of the revenue department (Darogha-e-Kachehri). Tikait Rai continued to rise steadily in service and, though apparently attached to Hasan Raza Khan, in fact, looked up to Haidar Beg for patronage. He is still remembered for his lavish charities and was known as the Raja Karan of his time. He granted stipends and pensions to many learned men and other deserving people.

On the other hand, he had the ill reputation of being an invert, which probably explains his appointment, when he became acting minister, of many inexperienced and incompetent young men, to offices of responsibility.

In June 1792 Tikait Rai was selected to succeed Haidar Beg because of his long experience in the revenue department and the complete confidence that the late minister had reposed in him. During Haidar Beg’s absence on a mission to Calcutta in 1787 for nine months, Tikait Rai had held the entire charge of the revenue department. He appears to have been a cringing type of man lacking in that dignity of, which commanded respect and enforced obedience at a time when personal considerations carried great weight. Tikait Rai was also feeble in character and vacillating. Though in name Tikait Rai was Hasan Raza’s assistant, he, like Haidar Beg, exercised uncontrolled authority. The two ministers undertook a journey to Calcutta in 1793 to discuss with Shore the question of reforming the administration of Awadh and the means of liquidating the Nawab’s debts to the Company.

After their return the two gradually fell away from each other. The Nawab’s debts were mounting steadily and Tikait Rai often troubled Asif-ud Daula about them, sometimes not meeting his demands for money promptly. These things annoyed the Nawab from whose favors the acting minister fell till at last in 1210 A.H. (1795–96) Raja Jhao Lal, perhaps the greatest favourite of Asif-ud Daula, persuaded the Nawab to believe that Tikait Rai had embezzled large sums of money. He alleged that the practice of the minister had been to appoint his relatives and favourites to the treasury (e.g. Baijnath, treasurer) to embezzle large sums of money with their help, and to lend this money to the sarkar in the names of various bankers and moneylenders at exorbitant rates of interest.

Then he realized from the treasury the interest and sometimes the principal, of which a small portion went to the bankers whose names had been made use of white the greater part went to the minister himself. The Nawab appointed Rai Balakram, a minion of Jhao Lal, to check up Tikait Rai’s accounts, and the result was the reduction of the Nawab’s debts to the bankers to about a seventh of Tikait Rai’s total. How far this reduction was fair and how far the result of Balakram’s excessive zeal stretch is not known, but that Tikait Rai’s conduct had not been above board is proved from a statement of Cherry, a patron of Tikait Rai, suggesting that the minister delayed in delivering to him the accounts of the sarkar for fear of involving himself and his dependents. The Nawab dismissed Tikait Rai and his friends and suggested to Hasan Raza, the appointment of Jhao Lal as assistant minister. Hasan Raza, fearing that Jhao Lal being a favourite of the Nawab would be too independent of him, induced Cherry to influence the Nawab to reinstate Tikait Rai.

Thus in May 1796 Tikait Rai was reappointed, but without the charge of the treasury, but within a month both he and Hasan Raza were finally dismissed by the Nawab. Cherry’s patronage of Tikait Rai seems to have been more due to his dislike of Jhao Lal (in which he was supported by Shore’s definite censure) than for any particular admiration for Tikait Rai himself. When Cherry was recalled, Jhao Lal became the principal adviser of Asif-ud Daula, the offices of diwan and bakhshigari being nominally conferred upon the two reputed sons of the Nawab, Wazir Ali and Raza Ali. His influence in Court declined during 1794- 96. When on 31 March 1796 Asif-ud Daula had an occasion to meet the commander-in-chief, Sir Robert Abercrombie, at Lucknow, he requested him to secure the governor-general’s consent to the dismissal of Tikait Rai and the appointment of Jhao Lal in his place.

At the time of Tikait Rai’s reappointment with reduced powers in May 1796, Jhao Lal was given the charge of the Nawab’s household and the headship of the intelligence department. On the final dismissal of Hasan Raza and Tikait Rai in June 1796, Jhao Lal became all-powerful.

Nawab Asif-ud Daula along with his prime minister Mirza Hasan Raza Khan and diwan Raja Tikait Rai established a charitable institution (Rifah-e-Aam), which provided relief to thousands. Asif-ud-daula distributed salaries to the people with finance minister Raja Jhao Lal and diwan Raja Tikait Rai. Raja Tikait Rai participated in the 1st war of Independence on behalf of Awadh and had to seek refuge after the fall of Awadh to the British forces. There are differing accounts on what happened to his family after the defeat of the Indian forces.

Raja Tikait Rai’s family survived and some of the descendants are spread across UP and Delhi, but the full account of each generation and what they did and where they lived is missing. He also constructed many Temples, mosque, and bridges and dug tanks all over the state, which can still be seen. He also built Imambara to house alams. In Tehsil Bithur, Kanpur, there is a Baradari and a bathing quay built of red stone on the banks of Ganga known as Patthar ghat built by Raja Tikait Rai.

Among the many temples built by Tikait Rai, the Sheetla Devi Temple is the most famous and ancient Devi temple. It is said that the Muslim invaders destroyed the magnificent temple and it was only after centuries that a businessman first located the idol of Devi in the water of a nearby pond. The temple got reconstructed and the ancient style of the temple is still retained. The then Diwan of Nawab, Raja Tikait Rai, got reconstructed the Sheetla Devi Temple and also a very large pond with a number of downstairs and Ghats on both sides which is at present called ‘Tikait Rai ka Talaab’. The temple has been a sight of thousand years, the old ‘Aathon Ka Mela’ of Lucknow, which is held during the Holi festival each year near the temple and Pond. The main attraction of the temple is this that it is visited by the newly weds during/after their marriage. The pond, which was left abandoned for a long time, now has been recently renovated, but to the great disappointment, the construction has only taken place on the outer skirt of the pond in the terms of a boundary and fences whereas the area of pond, which was once used for the bathing purpose by queens is now used by kids as a playground. Swings being put up in the inner area of the pond while the stairs are being used as the jogging track in the current scenario. 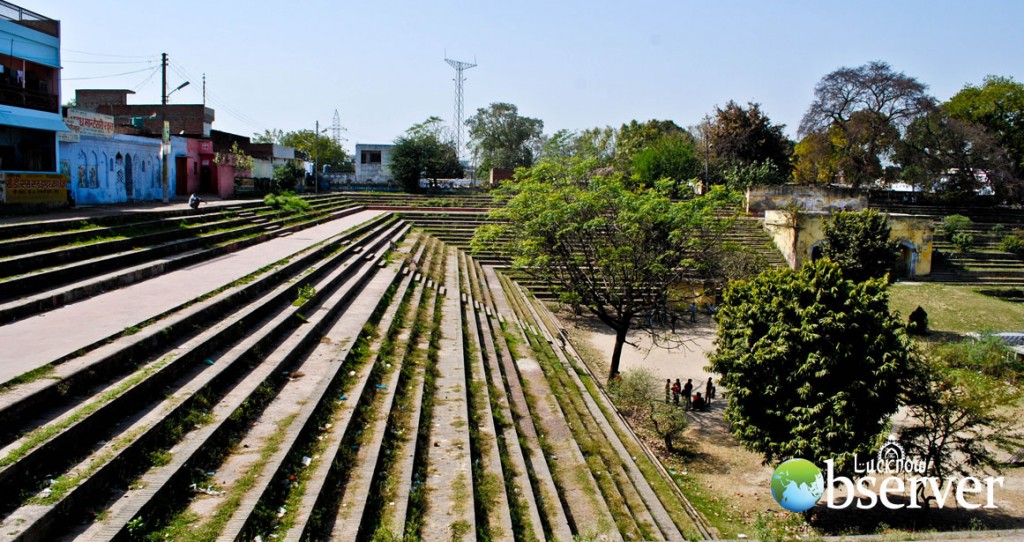