The power of radio is unimaginable as it is able to reach a huge audience instantly and the trick of the trade is to connect with the listener in an immediate and relevant way. For the same reason, The Lucknow Observer took a sneak peek inside the glass walled studios of Radio City 91.1FM, the country’s first and the city’s most favourite FM radio station, to find out the person behind the voice of popular radio jockeys like Vera, Meenu, Pooja and Raj and to ask them what they are thinking 100 years after the international day of women was first observed in 1914.

After all radio reaches more people than any other multimedia or digital ways of communication and what a radio jockey says must influence listeners in large numbers. Vera is the radio jockey who has been the earliest of all early birds for nearly a decade, making sure that her listeners crawl out of bed smiling. As host of the very popular Radio City Breakfast Show, Vera’s one-liners are precious for the positive vibes that they radiate first thing every morning.

“What is this life if full of care, we have no time to stand and stare..,.” Vera may say something like this to make listeners smile in an era when most human beings are full of frowns as they engage in cut-throat competition, materialism, professionalism, technology and what not.

Gender issues are close to the heart of this radio jockey who is a vehement opponent of dowry. Vera has no time for anyone, whether man or woman who demands dowry. For the moment Vera is happy to live an independent life as a single mother. She owns a home and has adopted a girl child to carve out a family for herself, on her own terms. Vera’s own search in life is to find peace within the self, a personal journey in which she invites all those who know her, including her listeners to join in.

Her independence is reflected in Vera’s voice that is more mesmerising than the music she plays, inspiring her listeners to live as free as a bird.

Vera’s own journey so far is not too far away from that of a bird’s. From being the first voice of RadioCity to becoming the most popular voice, Vera is happy where she is in life. And her success lies in being able to share this happiness with her listeners.

After Mount Carmel school, Vera studied at the prestigious Isabella Thoburn College and graduated from Lucknow University. Her foray into the professional world started as a teacher of drama and English at the Mahanagar branch of the City Montessori School. Before becoming the voice of Lucknow, she gained professional experience as sub-editor at the local office of the English daily, Hindustan Times.

“I am a big launcher. I saw the launch of the first edition of the Hindustan Times from Lucknow in 2000. Mine was the first transmission on All India Radio when it started its FM services, and eventually in 2001, I was the first to introduce RadioCity in Lucknow on-air,”says Vera.

Like her sweet voice, Vera is most endearing in person as well. Despite enjoying a ‘celebrity’ status, Vera does not seem to act like someone she is not.

That is because she does not deny her shortcomings and is generous in sharing both her highs and lows with listeners.

“If I am in a bad mood, then I share my feelings with my listeners…The Vera inside the recording room and the one outside is almost the same person. But yes, I do enjoy private moments like everybody else,” sings the nightingale.

Vera is most likeable because she has made sure that her head remains on her shoulder. She is always on the look out to learn something new in life and from people she meets. Blessed with a voice that makes men fall in love with her, Vera is taking her own sweet time to bite into that ‘mandatory’ shaadi ka laddoo.

Meenu, or Mini Mini Meenu, as her fans call her, sees herself as a mad woman.

“There is nothing called ‘sabhyata’ in me,” says this doe eyed girl who looks like a perfect, ‘sundar, susheel nari’, until she speaks!

Vibrant and vivacious, Meenu is a living example of the You-live-only-Once (YOLO) philiosophy! This St. Mary’s Convent alumnus, who went on-air in 2007, is a rare combination of inner strength, sense and sensibility. Meenu is someone who lives in the present but is mindful of things she needs to take care of in the imminent future, her sister’s wedding for example!

A die-hard fan of motor biking, Meenu is a girl who loves flying a Royal Enfield to rev up her spirits one moment and to calm down takes to pottery and sculpture next. Today she is friend, philosopher and guide to her mother, after losing her father last December.

Recalling her encounter with the big, fat Indian male ego, this apparently carefree girl with a I-don’t-give-a-damn-attitude says that when she goes riding in the city, nobody looks at the Royal Enfield but only at the rider! But like most girls, she brushes aside unwanted comments like dandruff on the shoulder!

This tomboyish girl has a touching and very feminine side to her which is revealed when she excuses herself to text her mother that she has reached her destination safe. Meenu celebrates her womanhood, even though it is on a Royal Enfield!

Most of the time, she is happy in every situation that life offers her and she is a firm believer in carpe diem, or seize the day.

Yes, she says she is single and very much ready to mingle…are the men listening? 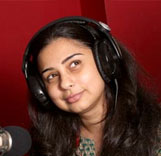 Pooja feels that her greatest strength is that she stands by what she feels and is intolerant of liars. She joined RadioCity in 2002 after completing her education from La Martiniere Girls’ College and later Awadh Girls’ Degree College. She studied for a year in New York. When she could not stand being away from home, from her city of birth and the Lucknawi chaat, Pooja returned to regale Lucknowites with her voice.

An extremely grounded person, Pooja’s mantra in life is to be grateful for every small thing in life. Pooja might be an introvert but one who does not shy away from talking about her faults with ease.

This Women’s Day, Pooja plans to celebrate her womanhood just by being herself.

Raj looks as happy go lucky as Abhay Deol in the popular flick of the same name.

He lives each moment to its fullest and lives it kingsize. “Live life, don’t merely exist!” is his mantra.

His message this Women’s Day to all men is to never forget that they have women at home. “You have mothers and sisters. Women don’t change once they step outside the home. When you look at a beautiful girl then compliment her instead of passing a sleazy comment.

To women, I would like to say that in order to be equal, don’t tread the same path as men. For example, smoking and alcohol is bad for everyone and does not make you equal to men. It should not be a Man versus Woman world, but both should complement each other.”

All his life he has been surrounded by women, both professionally and in his personal life. It is the women in his life who have shaped his personality.

“Those who say that women cannot drive or cannot do mathematics don’t know women,”says Raj.

Kal Bhi Aaj Bhi is a unique & interactive show where evergreen songs meet evergreen stars. The show plays music from yesteryears and interviews of legends who have paved the way for music today.

In this show the RJ showcases the golden moments of the memorable stars that are called ‘evergreen’ because they are relevant toour lives Kal Bhi Aaj Bhi. With this show he not only endeavors to provide the best of yesteryears’ melodious music but also decorates the entire musical journey with many inside stories and never heard before trivia related to the evergreen stars and yesteryears’ movies. The special evergreen star interviews featured in the segment ‘evergreen star mulakat’ have invoked rave reviews. From Kalyanji Anandji, Rishi Kapoor, Dev Anand, to the Mangeshkar sisters, all were floored with the amount of research and insightful questions asked of them by RJ Gaurav.