Keeping the Legacy of Kathak Alive

India’s well-known North Indian classical dance ‘Kathak’ is one of the most established cultural art forms. The word Kathak is said to have been derived from the word “Katha”, which means “story”, which is derived from the dance dramas of ancient India. In ancient India, there were “Katha Kars” who used to perform religious and mythological stories to the addition of music and dance.

Kathak was primarily linked with agroup of female courtesans which required the highest standards of training, intelligence, and most important, politeness. But unfortunately, when the British consolidated their hold over India during the Victorian era, this practice was discouraged and was outlawed. That sent the artform of kathak into a downward spiral that was not reversed till Independence when there was a rebirth in awareness in traditional Indian artforms.

During the nineteenth century Gharanas or schools of Kathak were also emerged. There are three main gharanas of kathak- the Jaipur Gharana, the Lucknow Gharana, and the Banaras Gharana. They are named according to the geographical area in which they developed. Each has a slight difference in clarification and collection.In the court of Wajid Ali Shah, the Nawab of Oudh, Kathak emphasized dramatic and sensuous expression and developed into a distinct style called the Lucknow Gharana. This Gharana is said to have originated with Wajid Ali Shah’s court dancer Thakur Prasad ji.

Thakur Prasadji, along with Kalka Prasad and Bindadin Maharaj were employed in the court of Nawab Wajid Ali Shah. The Nawab himself was a great poet, composer and expert of music and dance. It is believed that Kalka Prasad and Bindadin Maharaj were the architects of the present form of Lucknow Gharana, which is widely also known as Kalka-Bindadin Gharana.

Thereafter Kalka-Bindadin family raised and provided their unique style form with strength and generations, with the contribution of the Maharaj brothers (Achchan, Shambhu and Lachhu Maharaj. The Lucknow Gharana of Kathak came to be characterized as a dance which was graceful movements, decorative, suggestive, expressive, sensuous elegance and natural poise, concern for movements and creative inventions are the hallmarks of this style. “Bhava” became the forte of the Kalka-Bindadin Gharana. In this way their dance became capable of expressing the indirect shades of emotion. Presently, Birju Maharaj is considered to be the chief representative of this gharana.

Birju Maharaj has introduced many relative invention and compositions in Kathak, which was traditionally a solo dance form. He has gained a strong reputation for combining purely classical movements and style with particularly modern use of space. He is also a wonderful singer with a strong hold on, Thumri, Dadra, Bhajan and Ghazals. 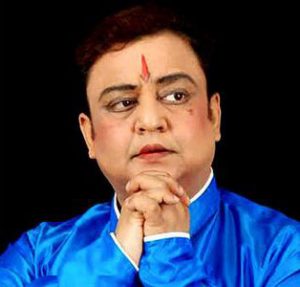 Birju Maharaj was born in the house of renowned Kathak supporter, Jagannath Maharaj of Lucknow Gharana. His father Achchan Maharaj used to spend much time in teaching Birju, the fundamentals of Kathak. He also accompanied his father to the places where Achchan Maharaj had to perform. Therefore, Birju Maharaj started learning dance forms at a very early age and infact, his uncles, Lachhu Maharaj and Shambhu Maharaj also guided him in learning the Kathak dance andhe gave his first performance at the age of seven. However, after the death of his father Achchan Maharaj in 1947, the family moved to Bombay. There, he learnt the different aspects of the Kathak and other Indian classical dance forms. At the age of thirteen, he was invited to Delhi to teach at Sangeet Bharati.

Pandit Birju Maharaj has three daughters and two sons. He also has a grandson Tribhuwan Maharaj and a granddaughter Ragini Maharaj.

Pandit Jai Kishan Maharaj, son of the great maestro Padma Vibhushan Pandit Birju Maharaj, belongs to the renowned family of professional dancers of the country known as the Kalka-Bindadin Gharana of the Lucknow Gharana of Kathak. His graceful form cheered by his large expressive eyes and a charming smile speak for his attractive stage presence. His skill for rhythm, flourish in movements and fluency in expression at once impresses the authorities and laymen alike.

Pandit Jai Kishan absorbed the art of Kathak with great dedication since early childhood. He has risen today, to be an artist of high capability. Impressive raciness, alert celerity, imaginative “Abhinaya”, exceptional skills and energy charge movement are the areas of attraction of his style. Pandit Jai Kishan Maharaj has accompanied his father, Pt. Birju Maharaj on several concert and tours abroad. He has also performed at the festival of India held in USSR, Japan, France International festival in Europe and also at festivals held in America, Saudi Arabia, Italy and Norway.

As a solo artist, he has performed in many music conferences in India, such as Sharat Chandrika, Kalka–Bindadin Jayanti at Pune and Khajuraho. He has been featured in the National Program of Dance produced by Delhi Doordarshan and also danced in the lead roles of several compositions of Pt. Birju Maharaj, presented by Kathak Kendra like Krishnayan, Katha Raghunath Ki, Roopmati, Baaz Bahadur, Hori Dhoom Mocho Ri, Kumar Sambhav, Habba Khatoon, Meera Hari Rang Raachi.

Jai Kishan Maharaj associates himself to various roles like performer, teacher, choreographer, drummer and music composer to all of which he brings challenging standards leading to a best artistic experience. He reveals with his choreography in Paran, Gath, and Tukra and especially with his freshness of approach within tradition, exploring the different facts, which has infinite opportunities. He has directed the dance drama “Aakanshka”, “Sadhu Vaswani” and “Panchboot”, and also in the serial “Ayurved Sarthi” and a documentary film on National Integration. He has also composed the music for “Mera Bharat Mahan” and “Hari-Hara” staged by Sri Ram Bharatiya Kala Kendra as well as for the compositions “Om Shakti”, “Aakar” and the music for the dance presentation for Famina. Gardwali film “Dagadia”also has music directed by him. He has also done the creative choreography in a Hindi movie “Dil to Pagal Hai” by Yash Chopra.His unique choreography performance with ghazal maestro Pankaj Udhas in the past has added new heights in Indian classical music. His most striking feature is his potential for creativity. He currently teaches Kathak at Kathak Kendra, Delhi.

The Maharaj family is one of the strongest pillars of Kathak today. From Bindadin Maharaj to Pandit Jai Kishan Maharaj, 3 generations of the family have dedicated their lives for the betterment of this dance form which has evolved from being a way of enjoyment of the Nawab to the mainstream dance that we see today. They have successfully brought in this classical form into films with Birju Maharaj and Jaikishan Maharaj choreographing some of the most popular films like Dil to Pagal Hai and Bajirao Mastani.

Today, Kathak has regained its popularity after the period of decline during the rule of the British Empire where it was lowered by Victorian administrators, and it is now one of the eight officially classical dance forms of India. Kathak’s current form is a combination of all the efforts it has had in the past court and romantic aspects sit comfortably side-by-side with the mythological and religious aspects. Different dancers have worked on this form in different ways. The work of the Maharaj family including Achchan Maharaj,Shambhu Maharaj, Lachhu Maharaj and one of the great current dancers still alive today, Pandit Birju Maharaj and his son Pandit Jai Kishan Maharaj has been very successful in spreading the popularity of Kathak.

With dancing slowly evolving into a major career option by youngsters and Kathak evolving with the times, the art surely rests with some of the greatest legends of our times. The popularity has crossed borders and even foreigners have started showing deep interest in the classical Indian dance forms. The desi dance form has truly gone global, all owing to the efforts of maestros like Birju Maharaj and Pandit Jai Kishan Maharaj.

Arpit Saxena
Writer is pursuing engineering; writing is his interest.