Ramayan in Urdu is contribution from Lucknow 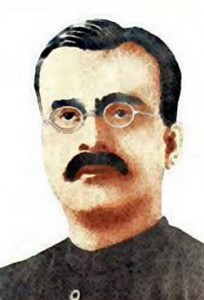 Pandit Brij Narain Chakbast was one such personality whose name is still taken in high esteem by the lovers of Urdu literature all over the world for his soul-inspiring compositions. This great Urdu poet, scholar and social reformer of the 20th century had a humble beginning. He was born in 1882 in an ordinary middle class Kashmiri Pandit family in Faizabad and had his early schooling there. The name of his father was Pandit Udit Narain Chakbast. Later on, this Chakbast family shifted from Faizabad to Lucknow and settled down in Kashmiri Mohalla where there was a big concentration of Kashmiri Pandit families in those days. The ancestral house of Pandit Brij Narain Chakbast was situated at a stone’s throw from the historic haveli of Kaul Shargas, the traditional Wasikedars of Oudh, whose family was the first to settle down in Kashmiri Mohalla in 1775 when Nawab Asaf-ud-Daula shifted his seat of government from Faizabad to Lucknow.

Pandit Brij Narain Chakbast made Lucknow, the city of Nawabs, as his real ‘Karma Bhoomi’.He was a man with a vision. His elder brother, Pandit Maharaj Narain Chakbast, was an executive officer in the Lucknow Municipal Board in the beginning of the 20th Century. Chakbast did his B.A. in 1905 and L.L.B. in 1907 from Canning College, which was affiliated with Allahabad University at that time and subsequently became a practicing lawyer. He started writing poetry from a very young age and generally his poetic compositions used to be very short, crisp and meaningful. He always used a very simple language in his Urdu compositions and used to describe the complexities of life in the shortest possible sentence in plain words.

In the twentieth century, Brij Narain Chakbast composed his own Urdu version of the Lord Rama story. That he chose to interpret Hinduism through the idiom of Urdu high literature at a time when language and religion separated the Hindu and Muslim communities of his time supplies yet another example of the historicity and cultural construction of the notion that Hindi and Urdu belong to the Hindu and Muslim communities, respectively. Chakbast also secularized Rama throughout his trilogy of Ramayana poems, prompting. Chakbast treated Lord Rama story in three poems: Ramayan Ka Eik Scene, Maa Ka Jawaab and Banwas Hone Par Ayodhya Nagri Ki Haalat. In the first poem, Rama notifies his mother of his decision to leave the kingdom for the forest, she objects, and he supplies his rationale. In the second poem, she responds and he concludes the discussion. Although the second poem commences where they first leaves off, their each function as independent units. The first two poems contain dialogue between mother and son, but in the third, an omniscient narrator depicts the emotions of Sita and Ayodhya as the time of exile approaches.

Chakbast was a highly sensitive poet and was very emotional by temperament. He wrote a number of articles on topics of social relevance in various reputed Urdu journals of his times which were all widely appreciated. The collection of his poetic compositions is known as ‘Subah Watan’ Its latest edition was published about 10 years back by his granddaughter, Ms. Uma Chakbast, which was released by the then Governor of U.P. Shri Usman Arif, who was himself a renowned Urdu poet. The fast changing social scenario had a great influence on the life of this sensitive Urdu poet who took up social reforms in his community as a mission in those days when the members of his own community were practicing very rigid social customs and traditions.

After the ‘excommunication’ of Mohan Lal Kashmiri in 1834 from the Kashmiri Pandit community for undertaking extensive tours of the Arabian countries and later on the ex communication of Pandit Bishan Narain Dar for undertaking sea voyage against the wishes of the community, and after his return to Kashmiri Mohalla in 1884 from England, by orthodox Pandits forced the broad-minded and well-educated members of the community all over North India to start the process of bringing certain reforms in the biradari so that it could move with the times and the community could be saved from its complete disintegration due to outdated beliefs and conventions. There was already a sharp division in the community into the Dharam Sabha and the Bishen Sabha over this most sensitive issue in Kashmiri Mohalla in those days.

As Kashmiri Mohalla of Lucknow was the nerve centre of the activities of the Kashmiri Pandits in the first half of the 20th century, naturally the Kashmiri Pandits living in this locality took up this challenge and in 1872 Shri Sheo Narain Bahar probably for the first time started a caste journal Mursala-e-Kashmir to bring social awakening in the community through his forceful writings in this journal. He was ably assisted by Shri Shyam Narain Masaldan and Shri Srikishen Tikoo in this stupendous task. After the death of Shri Bahar, Pandit Brij Narain Chakbast became the main architect of this movement of bringing social reforms in the community. Chakbast established a ‘Kutubkhana’ (library) of rare Urdu and Persian books and manuscripts in Kashmiri Mohalla exclusively for the Kashmiri Pandit boys and used to guide these young boys of the community in different disciplines so that they could become good citizens of the country.

Chakbast used to organise all-India Mushairas almost every year in Kashmiri Mohalla on a big plot of land adjacent to his house in which famous Urdu poets from all over the country used to come to recite their compositions. Chakbast also established a very meaningful organisation with the name Kashmiri Young Men’s Association to propagate his revolutionary ideas among the youth of the community through this body. Probably Chakbast was the only Urdu poet who had no ‘Takhallus’.

In February 1926, he collapsed at the railway station in Rae Bareli and died at the age of 44. Chakbast’s premature death was a great loss for Urdu but whatever he left is exemplary and is considered among the gems of Urdu literature. After his death, his friends and admirers formed a Chakbast Memorial Trust to keep his legacy alive. The trust gives stipends to the deserving Kashmiri students and financial assistance to the economically weaker Kashmiri widows and destitute.