Lucknow is honoured by ‘King of Music’

Naushad Ali ( 25th December 1919 – 5th May 2006) is the name in the Indian Film Industry on whom the entire world feels proud. It is special feeling for the people of Lucknow that he belongs to this wonderful city. Being a successful musician is not just only an achievement but popularising classical music in Indian films is the accomplishment. His first film as an independent music director was Prem Nagar in 1940; however his first musical success film was Rattan (1944). His career milestone includes 35 silver jubilee hits, 12 golden jubilee hits and 3 diamond jubilee mega successes. Naushad was conferred with the Dadasaheb Phalke Award, Padma Bhushan, Lata Mangeshkar Award, Amir Khusro Award, Sangeet Natak Akademi Award and many more, for his enormous contribution to the Bollywood film industry.

He was born and raised in Lucknow, a city with a long tradition as a center of Indian Muslim culture. As a child, Naushad visited the annual fair at the Deva Sharif in Barabanki, where all the great qawwals and musicians of those days performed before the devotees. He studied Hindustani music there under Ustad Ghurbat Ali, Ustad Yusuf Ali, Ustad Babban Saheb, and others. As a lad, he joined a junior theatrical club and was appointed the club’s music maestro for their theatrical presentations. He used to watch silent films at the Royal theatre in Lucknow. Theatre owners would hire a team of musicians to play the tabla, harmonium, sitar and violin. The musicians would watch the film first, make notes, finalise the scales required. When the show began in the evening, they would sit in front of the screen and play music for the scenes. This was a great way to be entertained and learn music at the same time. It made him grasp the nuances required in composing a film’s background music score. 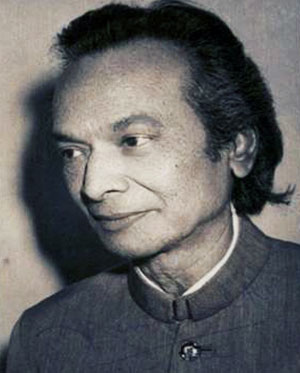 In time Naushad formed his own Windsor Music Entertainers or just Windsor Entertainers, so named because he had seen the word ‘Windsor’ around Lucknow and liked its ring. It led to the Indian Star Theatrical Company in a theatre at Golagunj in Lucknow. He was trained under Laddan Khan until he became capable of working independently as a composer. There he also developed the sense to pick rare musical jewels from the folk tradition of Punjab, Rajasthan, Gujarat and Saurashtra during the company’s sojourns in those regions. The travelling players got as far as Viramgam in Gujarat, where they discovered penury, even after selling off theatrical props and musical instruments. The company limped back to Lucknow through the kindness of one of Naushad’s friends.

Naushad had already become a cinema fan in the silent era, and then, in 1931, Indian cinema got voice and music that further fascinated the 13-year old boy. He ran away to Mumbai in the late 1937 to try his luck as a musician. In Mumbai, he initially stayed with an acquaintance from Lucknow at Colaba and after a while, shifted to Dadar opposite the Broadway theatre where he would sleep on the footpath. He assisted music director Ustad Jhande Khan who was at the peak of his success those days, at a monthly salary of Rs 40. The producer was a Russian and the studio was at Chembur. The film could not be completed. Naushad was a piano player so he worked as a pianist in composer Ustad Mushtaq Hussain’s orchestra. He then polished off an unfinished film score and got a credit as assistant to Hussain. Then the film company collapsed. Composer Khemchand Prakash took him on as his assistant for the film Kanchan at Ranjit Studio at a salary of Rs 60 per month, for which Naushad remained extremely grateful and, in interviews, had called Khemchand his guru. 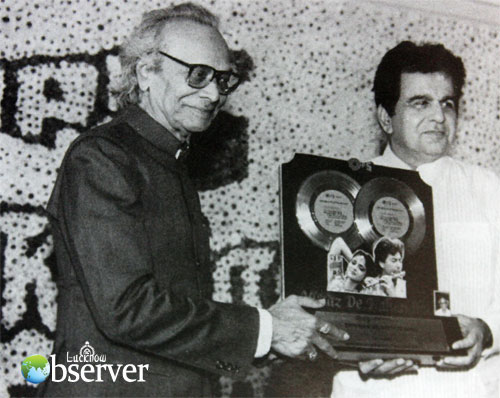 His friend, lyricist D N Madhok trusted Naushad’s unusual talent for composing music and introduced him to various film producers. Chandulal Shah, the owner of Ranjit Studios, offered to sign Naushad for one of his forthcoming films. Naushad composed a thumri for this film, ‘Bata de koi kaun gali gaye Shyam’, but the film never got on the floors. He was assistant music director for the Punjabi film ‘Mirza Sahib’ (1939).

He composed for his first independent film Prem Nagar in 1940 that had a story set in Kachchh for which he did a lot of research into the folk music of the area. With A.R. Kardar’s film Nayi Duniya (1942), he got first credit as music director and he began to work regularly for Kardar Productions. He however had a flexibility that he could work outside Kardar Productions, and this arrangement continued ever after. He first got noticed with A.R. Kardar’s film Sharda (1942) wherein 13-year-old Suraiya debuted with the song “Panchhi Ja” for the playback for heroine Mehtab. It was Rattan (1944) that took Naushad right to the top and enabled him to charge Rs 25,000 a film then. Film expert and author Rajesh Subramanian opines that Kardar production spent rupees seventy five thousand in 1944 to make ‘Rattan’. The music by Naushad saab was such a phenomenal hit that the company earned Rs 3 lacs as royalty from gramophone sales in the first year.

But his Lucknow based family remained against music and Naushad had to hide from his family the fact that he composed music. When Naushad got married, the band was playing the tunes of the super hit songs of Naushad’s film Rattan. While Naushad’s father and father-in-law were condemning the musician who had composed these songs, Naushad dared not tell them that it was he who had composed the music.

Naushad worked with several lyricists, including Shakeel Badayuni, Majrooh Sultanpuri, D. N. Madhok, Zia Sarhadi, and Khumar Barabankvi. Mother India (1957), for which he had composed music, was the first Indian film that got nominated for Oscar. He composed the tunes of Taj Mahal: An Eternal Love Story (2005) at the age of 86. Five films have been made on his life and work. Biographical books published are Dastaan-E-Naushad (Marathi) by Shashikant Kinikar; Aaj Gaawat Man Mero (Gujarati); Hindi and Urdu biographical sketches in Shama & Sushma Magazines respectively, titled “Naushad Ki Kahani, Naushad Ki Zubani”; the last one was translated into Marathi by Shashikant Kinikar. Kinikar also came up with a book titled “Notes of Naushad” which puts together some interesting anecdotes of Naushad’s life. Naushad also composed background music for the TV serial ‘Akbar The Great’ telecasted in 1988 which was directed by Akbar Khan.

Naushad had requested the Maharashtra state government to sanction a plot for an institution for promoting Hindustani music. This was sanctioned during his lifetime and the ‘Naushad Academy of Hindustani Sangeet’ was formed. Naushad was also a respected and published poet and formally launched his book of Urdu poetry entitled Aathwaan Sur (“The Eighth Note”) and the Navras label’s album titled “Aathwan Sur The Other Side of Naushad” having 8 ghazals as part of Hounslow’s book fair and festival “Bookmela” in November 1998. The album has lyrics and composition by Naushad, arranged by Uttam Singh.

Naushad was known for his deft adaptation of the classical musical tradition for movies. For some movies like Baiju Bawra, he composed all scores in classical raga modes and arranged for the well- known vocalist Amir Khan to be a music consultant for the film. He could easily work with Western instruments, including the clarinet, the mandolin, and the accordion. He could incorporate Western musical idioms in his compositions, and compose for Western-style orchestras. During the early 1940s, recordings were done in quiet parks and gardens after midnight because the studios did not have sound-proof recording rooms. In the gardens there would be no echo and disturbances, unlike the studios where the sound reverberated because of the tin roofs. For films like Uran Khatola and Amar, he recorded the voice of a particular artist on a scale of 90, then recorded it on 70, then on 50 and so on. After the complete recording, it was played for the scene and the impact it created was terrific.

He was one of the first to introduce sound mixing and the separate recording of voice and music tracks in playback singing. He was the first to combine the flute and the clarinet, the sitar and mandolin. He also introduced the accordion to Hindi film music and was among the first to concentrate on background music to extend character’s moods and dialogue through music. But perhaps his greatest contribution was to bring Indian classical music into the film medium. Many of his compositions were inspired by ragas and he even used distinguished classical artist like Amir Khan and D.V. Paluskar in Baiju Bawra (1952) and Bade Ghulam Ali Khan in Mughal-e-Azam (1960). demonstrated Naushad’s grasp of classical music and his ability to bring it to the masses, for which he won the first Filmfare Best Music Director Award in 1954. For Aan (1952), he was the first to use a 100-piece orchestra, He was the first composer to have developed the system of western notation in India. The notation for the music of the film Aan was published in book form in London.

In Uran Khatola (1955), he recorded an entire song without the use of orchestra, having replaced the sound of musical instruments with choral sound of humming. For Mughal-e-Azam (1960) song Ae Mohabbat Zindabad, he used a chorus of 100 persons. He asked Lata Mangeshkar to render a part of the song “Pyaar Kiya To Darna Kya” in a bathroom that had glazed tiles and then recorded the music to get the echo effect. For Ganga Jamuna (1961), he used lyrics in chaste Bhojpuri dialect. He used just six instruments in the title song of Mere Mehboob (1963). In 2004, a colorised version of the classic Mughal-e-Azam (1960) was released, for which Naushad had the orchestral music specially re-created (in Dolby Digital) by today’s industry musicians, while maintaining all the solo vocals from the original soundtrack. To elaborate, the playback vocals (though not the chorus) recorded four decades ago are mixed with orchestra tracks created in the present millennium.

As Indian film music gradually assumed a Western bend starting in the late 1960s, Naushad came to be considered old- fashioned. Composers who could compose rock-and-roll and disco-inflected music started getting increasingly popular. Naushad was still esteemed as a maestro, but his talents were sought mostly for historical movies where traditional scores were appropriate. Naushad died on 5th May 2006 in Mumbai. He was buried at the Juhu cemetery. His house in Lucknow is in very bad shape and the Naushad Sangeet Kendra Lucknow is also not upto the expectation level.

Writer is marketing professional. Being a freelance writer, Lucknow and Urdu are his passions 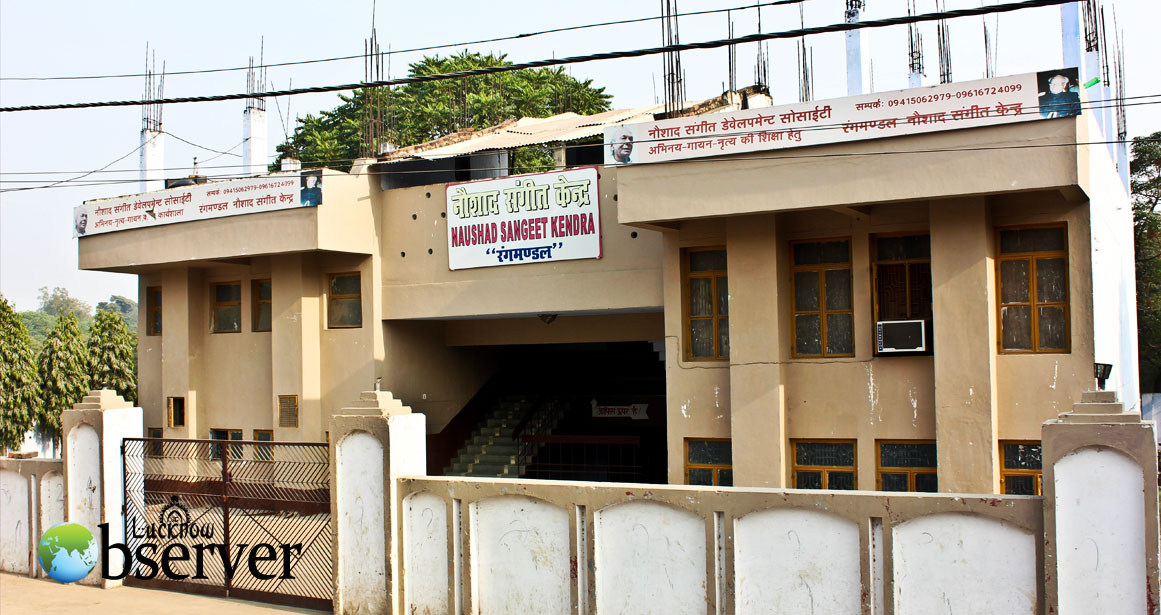