Padmashri Runa Banerjee has achieved a lot but there is so much more that she plans to do.

Talking to The Lucknow Observer at her office on Sitapur Road, Runa feels it is high time that the government got involved in all the work that still needs to be done for thousands of female artisans caught in poverty.

The urgency is because many women from depressed homes in various districts of Uttar Pradesh are giving up handicrafts to take to prostitution to earn a living.

“This has got to stop,” claims Runa almost in tears. The solution is simple, she says. All that these women require is an opportunity to practice what they know best and a little support to be able to earn a living from the work they do with their magical hands. 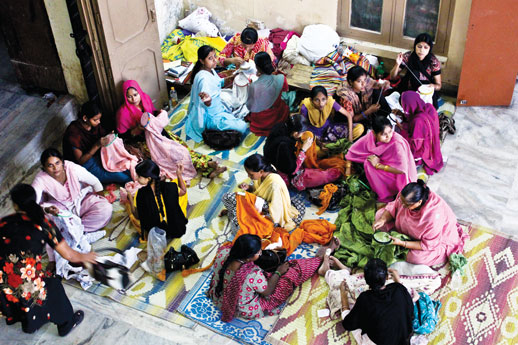 In the absence of any support from society more and more women are prepared to sell their body in order to clothe and to feed their respective families.

“It is not just money but there are other ways that the government can support women. There is need for premises, raw material and the marketing of goods. Once women are allowed to practice their art and earn a living from doing so they will need nobody’s money,” says Runa who has already helped countless women since she founded Self Employed Women’s Association (SEWA) some three decades ago. About 8,000 female continue to benefit from the SEWA center for chikan embroidery but that number is a drop in the ocean compared to the crying need of numerous other women living a life of pathos.

It is now a month ago since she met chief minister Akhilesh Yadav with a long term plan to improve the life of about 150,000 female artisans not just in Lucknow but in neighbouring districts of the state as well. Runa regrets that Akhilesh promised, but has not not got back to her on the proposal she has presented to him.

All these years SEWA has worked with women adept at the art of chikan embroidery on its own.

“Now that we have shown that we can do it we need the government to step in to take the movement forward,” says Runa who would like to see as many female artisans as possible engaged in different handicrafts improve their economic lot. This can be done only if civil society and the government work hand in hand on a war footing.

Recalling times when she had first decided to work with women, she said that then she had little to show for herself. She had nothing except a few ideas and some determination. It is only with the support of friends and colleagues that SEWA was able to help countless women enjoy a bank account, a regular income, a home of their own today and a school where children study till class eight on paying a monthly fee of Rs 50.

The same facilities can be enjoyed by many more women with the support of the state, feels Runa. Way back in 1988 it was EZE, Germany’s Protestant Association for Cooperation in Development that provided a generous grant of Rs 60 lakhs for three years.

For the same reason SEWA embroidery is now much in demand at national and international fashion shows. SEWA counts Lata Mangeshkar, Shabana Azmi, Parmeshwar Godrej amongst other celebrities as its client. For two decades the late actor Farooq Shaikh wore chikan kurtas only made by SEWA.

After having got its survival agenda rolling, SEWA has moved on to realising its dream of the revival of the exquisite art of chikan embroidery. The plan is to organise a permanent exhibition on the top floor of the SEWA center, to display a collection of rare embroideries from the past and exceptional work done by present day chikankar like Ruksana who is no more.

“We would not be where we are today if it was not for the grant from EZE,” admits Runa who is now impatient to seek help from both government and individuals to make SEWA move on to make a difference to the lives of many more women who continue to live dangerously on the edge of society today.