Unique aspect which is associated with Awadh

Lucknow is a city of magnificent and ornate gateways. While touring around the city, one is sure to pass through or by one of these beautiful ‘Darwazas’. Welcoming the passersby, the visitors, on every gate of the city are a pair of fish. The tale of these two fishes, that form the lietmotif of awadhi culture in the architectural marvels and decorative art, is intriguing, wrapped under several layers of history and mystery.

The origin of these fish is definitely the ‘Maahi-Maratib’, a Mughal military honour with it’s roots in Persia. It was bestowed by the Mughals on their exemplary military commanders. Historians are divided on how it reached Lucknow. Maahi-Maratib used to be a fierce looking head of a fish mounted on a staff.

This was carried in war behind the recipient king or commander. How it came to be a pair of fish instead of just a single fish head can possibly be attributed to a popular story of Nawab Saadat Khan Burhan-ul-Mulk. It is said that after being appointed the Governor of Awadh, on his way to Lucknow from Farukkhabad, he was crossing the river Ganga and two fish leaped into his lap. This was considered a good omen. The two fish, symbolizing good luck reached Lucknow along with Nawab Saadat Khan and thus began the golden era of the history of Awadh.

The twin fish gained more prominence in 1819 AD when Court artist Robert Home designed the royal insignia for Nawab Ghaziudddin Haider’s coronation as the first King of Awadh and used the twin fish as one of the chief elements. These fish turned into mermaids- ‘Jal pari’ during the rule of Nawab Wajid Ali Shah. From being carved as an ornamental motif in the buildings of Lucknow to being embroidered on delicate chikan fabrics. The fish motif pervaded all the decorative arts of Awadh. It adorned the Huqqa bases, Wine decanters, Betel boxes, Spittoons (Peek daan), Fruit bowls and plates of Lucknow’s famous Gilt Silver metalcraft. Even the weaponry was decorated with the fish motif. Unfortunately very few of these artifacts have survived and most of them are in Europe, either in Museums or private collections. The State Museum of Uttar Pradesh also have a few pieces but the collection is dismal to say the least.

Widely used in the decorative arts of Persia, China and Japan, fish is a universal symbol of good luck, prosperity, fertility and feminity. However in Lucknow it manifested both, its feminine as well as the masculine side. In the silverware, jewelry and textiles the fish form is more delicate and curvilinear while in the emblems and architecture, especially on the gateways, the form is more virile and bulkier.

The expression on the faces is more fierce with teeth sharp showing and tongues sticking out in some of the representations. This is probably because here they are symbols of military’s might, coming directly from the Maahi-Maratib.

It is interesting to note that during the reign of Nawab Wajid Ali Shah even the fierce, masculine fish in architecture, toned down and became more refined and sleek. The bulky fish from the royal insignia merged with the angels and turned into alluring mermaids. This change in the interpretation of the motif is a reflection of the Nawab’s artistic taste, his love for dramatics, fantasy and romance. The Lakhi gates of Qaiserbagh, especially the Western Gate, are an interesting study of the extensive use of the fish. As central motifs and as finer elements of detailing they are present in various sizes, proportions and forms. The gate has a pair of fish on the either side of the arch, a pair of mermaids inside the curve of the arch, a circular arrangement of fish elements has been used around the inside of the roof. Elaborate carvings of mermaid can be seen at the base of pillars and smaller pillars show a pattern made of forms remarkably inspired from the fish yet not literally like fish.

One of the most refined adaptation of the symbol can be seen in a pattern called ‘Maahi-Pusht’ (Fish-scales) used in ‘Ghararas'(Skirts with a parting), ‘Shararas’ (Skirts) and also Dupattas. Different colours of rich, satin fabric are used to form the scale-like pattern. This is a fine example of a symbol’s interpretation in a design because it is subtly suggestive and reminiscent of the fish without showing the complete form.

Owing to the changing times and lifestyles, the architectural styles, ornamental arts and fashion have also changed drastically. The once omnipresent fish motif is disappearing rapidly. Most crafts where it was used have suffered a decline themselves and now a days it is not even found in the jewels and needlecrafts anymore. There is a strong need to revive and reintroduce this beautiful motif, symbol of the rich history and culture of the Nawabi era, in the existing crafts of Lucknow. There is still hope that the fish might live because even now whenever the ‘brand’ Lucknow needs representation. Fish invariably becomes it legitimate logo.

Writer is from Lucknow and now living in Bangalore. She is Jewelry Designer by profession 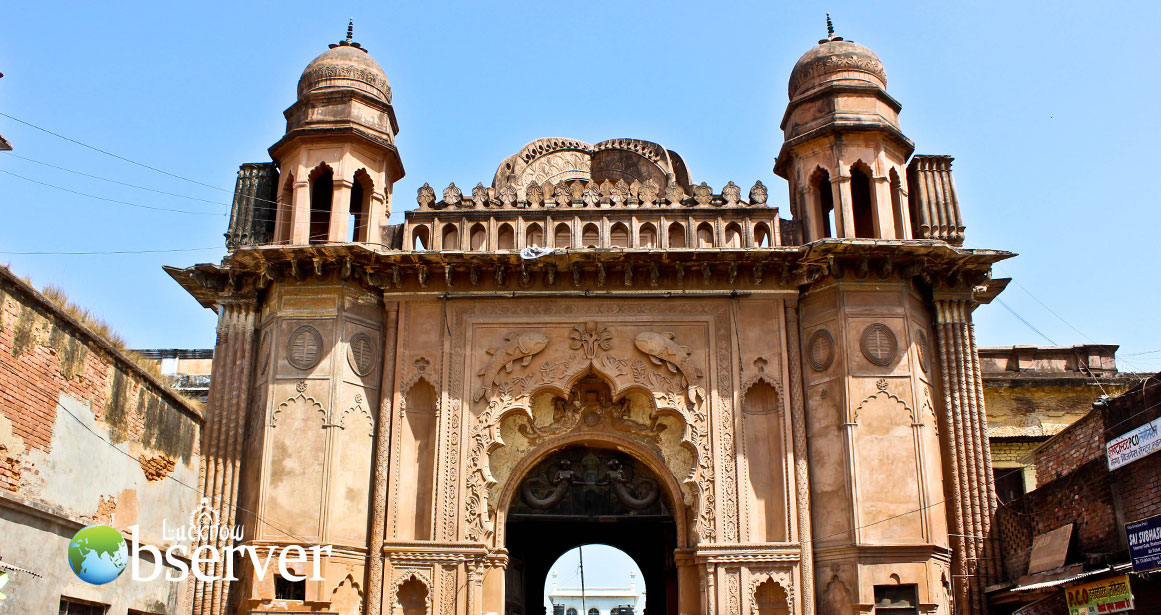