A Marvel of Lucknowi Architecture

To the south west of the main Qaiserbagh palace is situated Qaiser Pasand, originally the Kachehri of Raushan-ud-Daula who was the prime minister of King Ghazi-ud-din Haider and his son, constructed between 1827-34, this is the only built area which is still intact. Like all other buildings there is a basement and five-storey above ground level. Wajid Ali Shah, when started construction of Qaiserbagh palace annexed it to his palace and announced that the building will be used for the same purpose for which it was erected, the place of justice. It was named as Qaisar Pasand, and the Daftar-e-insha and Kachehri of the king remained there. Comparing with the other buildings of the period, it has rightly been described as ‘turbulent composition’ combining a large number of desperate features that set unhappily together.

“The Raushan-ud-Daula kothi was to be the most turbulent composition of the reign. Commissioned by Ghazi-ud-din Haider’s minister, Raushan-ud-Daula, the kothi had a complicated and mixed design, combining an astonishing range of various architectural elements. It was a huge edifice with at least one (and possibly two) basement level (s) and now four (but originally five) levels above ground level. Its basic form was rectangular, but acquired a complex polygonal outline, as it had canted corners on one front, projecting regular bays on another front, a grand hexa style portico on the third front, and yet other tiny balconies, colonnaded verandahs and staircases on each and every front. The upper basement contained taikhanas, whose ventilators were to be seen peeping out of its rusticated outer face.

In fact, Kothi Raushan-ud-Daula was erected on a dried tank, the level of which was much lower than the average ground level.

Therefore the foundation of the edifice was also in depth and two storey of it could be equaled to the general ground level. Kothi Roshan-ud-Daula was erected at the time when there was no existence of Qaiserbagh. The portion facing north was first built and the architecture of this portion was copied from that of Daulat Khana Asifi. It was raised to the third level to match the floor level of the ‘hearing hall’ rooftop. The five storey of the building were intact till 1868. The British Government made minor changes during the settlement of 1868 – 1869 and an office of Dy. Commissioner was then established there. The portion facing south was constructed after completion of the first phase, and is totally different from the previous construction. The two ‘hearing halls’ of the two phases construction were connected with five doorways of eight feet height, which were closed in 1870s for the reasons better known to the administration of that time.

The design of the ceiling of the ‘hearing hall’ was the same as that of present day structure. The well-defined design still tells the building design genius of that period. Total load distributed through smaller beams to the larger one and finally rested to the strong and wide walls. Today these are called coffer beams and coffer slab. The walls are also not abnormally wide, mostly not more than a meter. A mosque is situated across one corner of the building and an identical building stands on the opposite corner for compositional balance. On the roof, a second pavilion was crowned with a striking half dome, covered with copper, as though it had been sliced from top to bottom. All the domes, big and small are covered with copper. Potteries are extensively used. On the top of all, there is a semi-circular copper ware, suggesting the sun is rising, with the semaphore in the centre.

After independence, in mid fifties, the land of the building facing north was allotted to Nari Sewa Samiti, a non- government organization, and a girl’s college is being run here. On the south and west side some vulgar buildings were erected, to hide behind them the original structure of Kothi Raushan-ud-Daula. Though protected under U.P. State archaeology, U.P. state archaeology itself and the district election office have carelessly used the building. 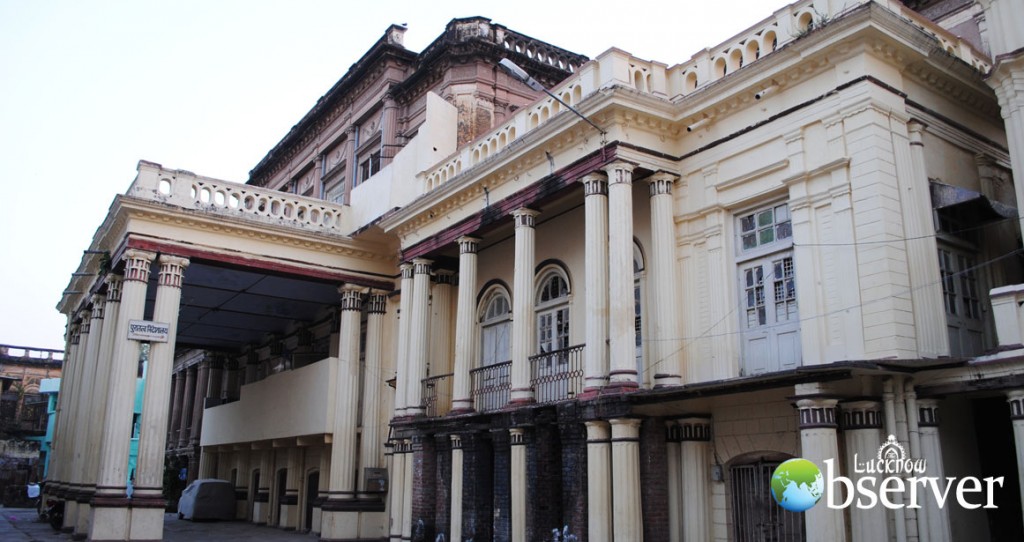