Kothi Darshan Bilas is a muted monument with an intriguing story, a dilapidating building now with lime gratings peeking in places and intrusive tree roots penetrating its strength, it once housed royalty. Its construction was started by the Badshah-e-Awadh, Nawab Ghazi-ud-Din Haider. After he passed away in 1827, its completion was left in the hands of his heir, the next ruling Nawab of Oudh who brought to its remarkable realization. Nawab Nasir-ud-Din Haider of the astral inclination, who also built the legendary Taron Wali Kothi or observatory for his state astrologist, had it completed by 1837.

What was born was a unique blend of Muslim and European architecture that was the effective and flourishing style of the time it came to be known as the Chaurukhi Kothi for its architectural design. That design combined three of Lucknow’s leading structural marvels of the Nawabi era. Dilkusha palace, that essential replica of an English stately home, Nawab Sadat Ali Khan’s fancy is borne by the frontal facade of this past palace. The rear bears resemblance to the riverside face of Kothi Farhat Baksh, central part of Badi Chattar Manzil complex, with its two tall crowded turrets, that functioned as the Central Drug Research Institute (CDRI) before moving to new grounds. The general architecture is based on the pattern of the previously luxuriant ‘Garden of Moses’ or Musa Bagh, another beautiful exercise in indo- European design. This ingenuity of style the Nawab reserved for his beloved begum, leading the monument to be crowned for his devotion as palace of Qudsia Mahal. The queen resided here while the king colonized the nearby Kothi Farhat Baksh. Darshan Bilas, it is said, was once an adorning adjunct to the now extinct Choti Chattar Manzil, it is now its only prized surviving remnant. 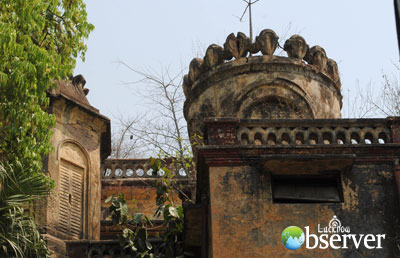 The begum was known for her integrity and devotion to the Nawab, a breach in his faith for her resulted in her devastation. In her innocence’s indignation she decided to end her life, by the time the Nawab learnt she was free from any guilt, any misdeed, it was too late to undo the foul harm done to a pure soul -the sanctity that was his wife had slipped away. Begum Qudsia Mahal poisoned herself to death on 21st august 1834 aged only a tender, sad 24 years. Her dignity and pride lent the palace its beauty and magnificent honour; her injury insinuated the monument’s regal decline as well. The mutiny and the war of independence that ensued soon after that brought its surroundings crumbling to dust and led them to destruction opened its gate to invaders’ feet. During the British period it was home to the company’s engineers. 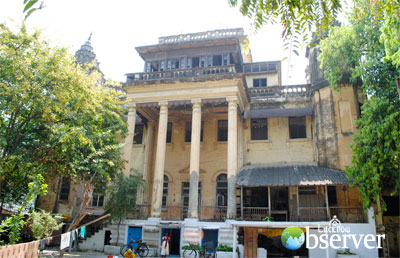 As time went by, it added denigrating touches to this former glorious abode, baring it to the indignity of obscurity in hands of the unrecognising and unappreciating. It now houses the Office of Medical Health Directorate, Government of Uttar Pradesh. The once Nawabi luxury officiating as an effective bureaucratic extension but its function even did not inspire refurbishment of its frame and facade. The brown structure wears black marks of a decrepit structure, thoughtless cement plaster covering the careful, invaluable art of bygone craftsmen. Windows that once held the Nawab’s treasure in their shades stand with fallen panes, doors creaking with impending collapse. The city’s apathy to its heritage has left many such marvels in a depressing lurch. For past some time the building stood deserted asserting whatever little was left of its being. However encroachments have recently been seeping further degradation onto its compound.

Thankfully, Uttar Pradesh Tourism, a body of the government devoted towards promoting the state’s cultural and historical blessings, so as to enhance the tourism scene, has taken up the cause of this failing battle to some estimable measure of success, it has included the monument in its elaborate itinerary of Qaiserbagh Heritage Walk, an enlightening guided tour of Lucknowi marvels such as Tomb of Saadat Ali Khan, Tomb of Murshid Zadi, Begum Hazrat Mahal Park, Safed Baradari and more.

Emphasizing its history, its value and beauty is sure to lift it out of its present decrepit oblivion and the effort is truly commendable. More steps towards restoring its architectural beauty to its prime so that it may breathe of its Nawabi charms are essential and desirable.

Shamim A. Aarzoo
Writer is the Editor In Chief of The Lucknow Observer 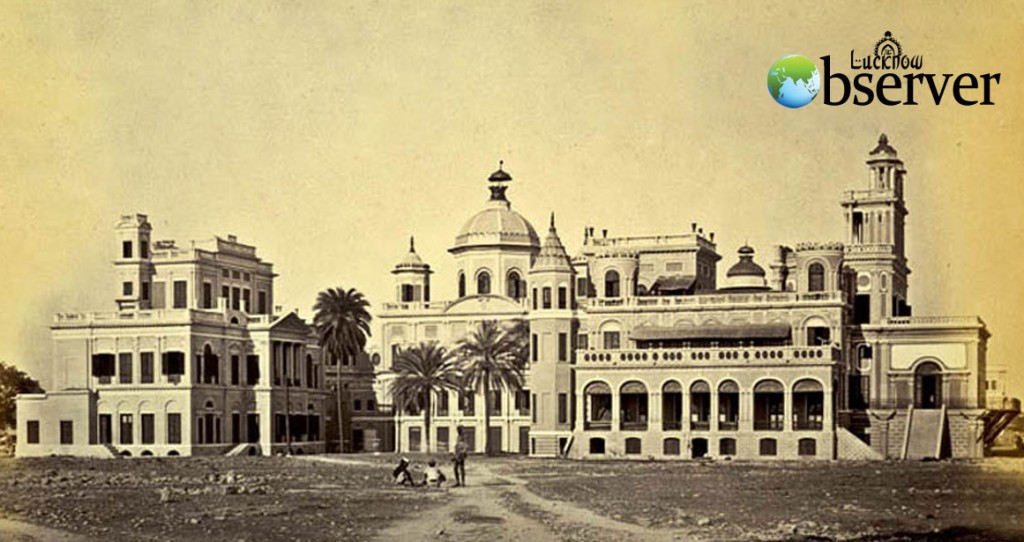