The Fate of Artisans Hanging by a Thread

Chikankari as a craft flourished and spread far and wide while Mukesh work continued to die out.

There are now only a handful of kaarigars who are adept at Mukesh work embroidery. Most of them are from the Muslim community and live as well as work in the narrow by lanes of an area called ‘Chowk’ in old Lucknow.

Kamdani is a type of Zardozi art of beautifying the plane and simple clothes to exclusive and perishing ones. Zardozi differs from other traditions of embroidery like Kantha, Phulkari, and Kasuti etc. Where the movement of threaded needle is guided by variety of stitches. In other embroideries silk, cotton or woolen thread are used, which are binding medium, whereas in zardozi, the body of the design is completed by laying varieties of metallic threads in several shapes and forms along with beads, stones, beetle wings, etc. The whole process is more indicative of applique, then embroidery. Thus it may be called metal applique. One can understand this from the fact that Zardoz always get payments for amount of wire stitched on the cloth by weight. They never use the word kadhai, the Hindi word for embroidery, instead refer to it as ‘salme sitare ka kaam ka takna’ which means laying salma, sitara on the body of the fabric which is given them to make it as per the demands of the customers the more heavy clothes the more beneficial it would be for a Zardoz. Although in the ancient times the royal families of India used to wear the clothes having the embroidery of the expensive and exclusive metals such as Gold and Silver which are very rare now a days. 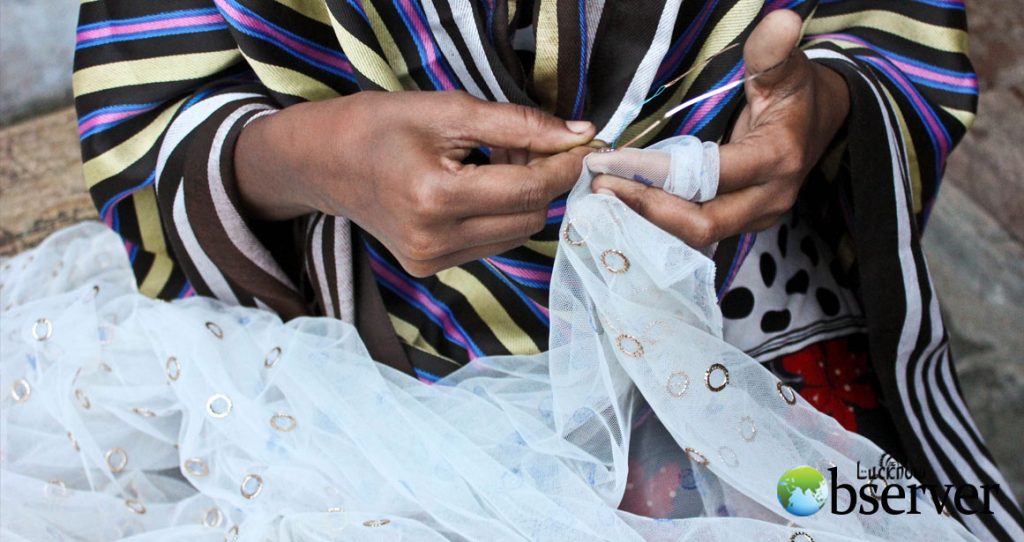 Embroidery that uses pure gold and silver wire and zari is known as Zardozi. This work is also known as karchobi. Zardozi involves the use of gold threads, spangles, beads, seed pearls, wire, gota and kinari. The original embroidery of Zardozi was done with pure silver wires coated with real gold, and was known as Kalabatun. There are two broad techniques of Zardozi work. These are karchobi and kamdani. Karchobi is done for heavy fabrics and furnishings, for eg. Tent, hangings, cover, spreads, trappings, umbrella, parasols etc. The fabric is generally velvet or heavy satin with lining support underneath. The Kamdani technique on the other hand is more magnificently practiced on finer fabrics such as muslin, silk etc. which were more suitable for costumes and related accessories such as caps, veils, scarves, bonnets, shoes, belts, purses, fans, jewellery etc. which differentiate Zardozi than other stitches.

Zardozi and Aari are two classifications with a slight difference in needle holding. Zardozi is embroidered with simple hand needle thus involving more effort, while for the Aari the needle is fixed in a stick, which makes the hole in the fabric, and thread, can be pulled both ways. When the embroidery had completely covered the fabric the work is known as Zaminduzi or if single motifs were scattered across it was known is Gulduzi. The stitches used in Zardozi are laid-stitch, couching, stem stitch, running stitch and satin stitch. Raised effect is given in Zardozi by padding in soft thick cotton thread and cardboard or bukram. There are many types of Zari threads. The thicker Kalabatune is braided gold thread used in the border while a thinner variety is used at the thinner edges for batwas, tassels, necklace strings. Tirora is a gold thread especially twisted using curves and complex designs. The dull Zari thread in ‘Kora’ and lustrous one in ‘Chikan’. The design is first traced out on paper, pricked with pins, with fine powder lightly rubbed on it. Now-a-days, gold and silver embroidery is mainly done on sarees and choli pieces. The other articles embroidered are evening bags, slippers, belts.

An average income of an Zardozi artisan is 10000 Rs. per month- after the extreme hard, technical and tiring work of 10/12 hours per day which is comparatively a very low wage, even its less than the minimum wages decided by the government for the work of eight hours per day and extra payments also specified for more than eight hours a day but the rate of unemployment and low demand of such work and abundance of such artisans due to the lack of demand has made it more worst for these artisans to survive on such low wages. These workers have also made some associations for the upliftment of their community for which they have also asked the government to come up and help them to preserve this culture and heritage of artificial beauty to make the world more colorful. 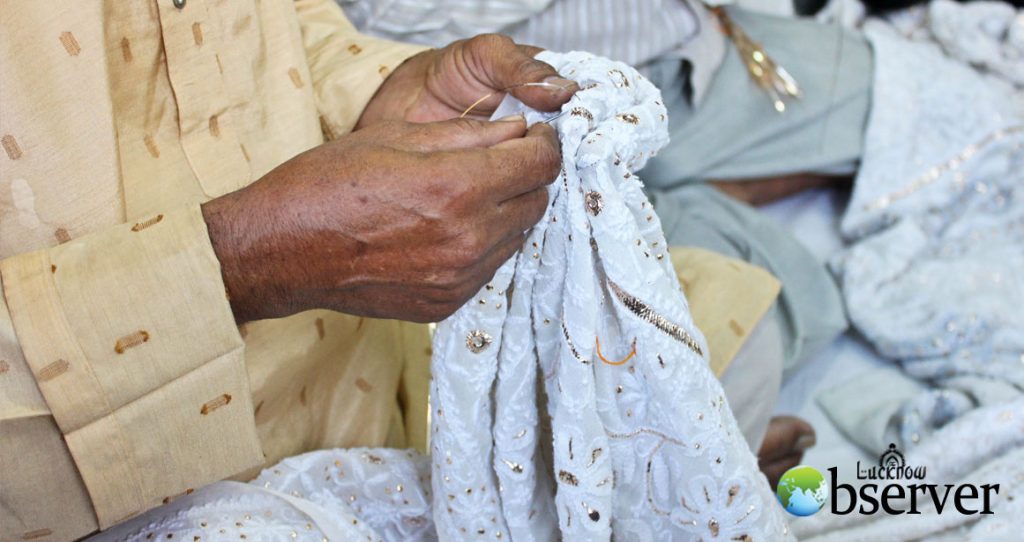 Firstly the design is traced on to the tracing paper and then the design is perforated with the needle all over on the design. The fabric on which, the embroidery is to be done is placed on a flat table and the tracing sheet is placed in position. A solution of kerosene and Robin Blue/zinc oxide is made. A wad of cloth is dipped into this solution and wiped against the tracing so that the ink seeps through the holes to trace the design onto the fabric.

In olden days their were localities specified in Lucknow for every profession, amongst that Zardozi was also one of them and was considered as to be the most rich and cultured locality of Awadh province as they were considered to be the most closest persons to the Royal family and were treated uncommon, but today the condition of the artisans is very bad as the machines and ready made clothes have over taken the market and the demand of these artisans has decreased which has made the artisans to switch to other occupations. Day by day the art of beautifying the simple clothes is dying which needs help for its survival for the future coming generations.