A Taste Worth the Wait

And we’re at that time of the year again. The white kurta pajamas all in ready set go mode, abstinence from the worldly pleasures as far as one can manage, denial of feeling the rabid hunger billowing in your very veins. But here we are, talking about it, aren’t we?

With the onset of this pious month, cometh the very desire it asks us to refrain from- FOOD. How can one survive without it, that is the main question arising in every mind?

You name it we have it – Laccha Paratha, Suhaal, Nahari Kulche, Shaakhe, Kashmiri Chai (with its signature pink color). If we go by the streets of old Lucknow or even stop by the streets of Aminabad in the wee hours of the night, we are bound to get our taste bud tantalized by the mere display of Gulab Jamuns covered in silver foil or people sipping Chai and talking about life as if it’s the mid day. Well, it is Ramzan after all. We wake up till Sehri and pull onto a night cap not before dawn, but whose judging, right?

Another favorite by the palate police is the Haleem. To an ignorant person, it may sound like any other dish that the carnivores ramble about, but to the connoisseurs’ it is the King of dishes (the one you can’t have more or less of, at the same time)

What is haleem? One naïve may ask the other. Symbolism may work for some but reminiscence does the trick. The earliest account may be that of a cold day with rain making it dull ever so more. You see a seraphic piping hot bowl of divine coming towards you with almost such a calescent luster that it reciprocates its warmth in your eyes. Such were the childhood days where Dadi jaan could make you see stars and the entire galaxies in one good old bowl of haleem.

Though not much in vogue among the Lakhnawi crowd, the haleem serves as the calling card of the Hyderabad brand. This stew, is one, belonging to many nations at the same time (talk about food peace) with variations flitting in as desired. In India and Pakistan its popular adaptation is called Khichra, another so verified bend being the Hyderabadi Haleem. While in Turkey, Iran, and Azerbaijan its goes by Kes’kek and by Harissa in the Arab world and Armenia. Interestingly the earliest traces of haleem, also known as Harees or Harissa can be traced back to the 10th century Arabia. Its recipe dates back to the time when Arab scribe Abu Muhammad al-Muzaffar ibn Sayyar, complied a cookbook of dishes popular with the royals of that time. His book the “Kitab Al-Tabikh” (book of recipes) contained the recipe, which is quite similar to the one made in contemporary Middle East.

The question arises as to how did this Middle Eastern phenomenon became so close to the Indian hearts and won them over so much as to have them design their own brand. Some point out that the Yemenis in the army of Bahadur Shah

Zafar introduced Harees to Hyderabad Nizam’s contingent. While the others, credit it to Aurangzeb and his army. When he was busy conquering the Deccan, even today many recount of the Alamgir being one of the many contributors to it. Some historians claim that it was Sultan Saif Najaf Jung, who used to serve Haleem on special occasions. 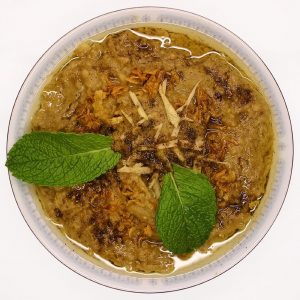 A descendant of Al-Qu’aiti dynasty, he was the principal noble of the Nizam estate. His family was the native of Mukalla, which was then under the dominion of the British, whichever may be the case, the customized Arab dish migrated from the battalions to where it stands today, as a legacy unmoved. It would be safe to say that haleem came along with the Persians and the Arab settlers to India. Later on the Hyderabadis altered it to please their palates, in turn creating the Hyderabadi Haleem that stand as of today. An impressive fact that can be observed is that the original cooking method has not altered much, which is quite an impressive feat, considering the amount of variations it boasts of now. How this simple dish of ethereal content became Indian is a tale of adaptability and pure serendipity. Either way, it was a pure-play soldier play dish. Initially a product committed to Muharram, Haleem is now available all year round. It was the dynamic style of living and economic growth of cultures that led to the alternative search. Haleem as a Ramzan dish is not an old tradition. So the haleem moved from Muharram to Ramzan, giving the sellers another month of heavy sales and assured business escalation.

It is quite an extensive process when one comes around to making it. Preparation of Haleem is a time taking and tedious job. It takes hours and hours to get to the desired texture and taste it is famous for. Refreshingly, Haleem is Persian for patience, which seems to be at oddity since it takes approximately seven to eight hours to be ready.

The most important ingredient is ‘ghaat’ a mixture of pulses and ‘boung’ meat, which is the most fibrous part of an animal, along with a mixture of spices, is cooked till the meat pieces totally blend and form a paste. It started with the carnage of lambs, in some cases camels, while the skull and breasts were used for the cooking Nahari. The meat was mixed with lentils wheat or cereals.

One can see men as early as dawn getting down and dirty with spices and meat, topped with pure ghee, only to finish it later by the evening or in Ramzan time before iftar. The pounding ensures it forms a nice paste. Mixing all the spices, which include ginger, black pepper, chilies, cloves, cardamoms, cumin seeds, caraway seeds and other flavor enhancing ingredients specially kababchini (allspice) and saffron etc., are an essential part of the procedure. Additionally it has dry fruits like cashews, almonds, and pistachios. To get the thick paste like texture it is essential to stir the huge pot continuously; hence it is quite impossible to make small batches of it. Finally, before serving it to the edacious customers, it is topped with a specially prepared sherwa (a spicy soup), fried onions, a slice of lemon and when needed boiled eggs. The Hyderabadi haleem was given the Geographical Indication (GI) tag in September 2010. This means that no other city can make or market the dish as Hyderabad haleem.

There are two well-known forms of haleem. The Lucknow haleem is spiced lightly and has cardamom undertones, while the Hyderabad one has all the spices of a garam masala that makes it spicy. The richness of the dish and its appeal lies in it being cooked for hours, and beaten and mashed. Some outlets in Lucknow, where its authenticity is retained are FalakNuma, Naushijaan and off course the much-acclaimed Tunday Kababi, boasts of serving a mean bowl with all it has to offer. While if you want to have the real deal, the Pista house of Hyderabad has a wide range of delivery services in India and abroad.

Amirah Sheikh
Writer is a student and has a keen interest in the city and its culture.