Faiz Ahmad Faiz, the most celebrated poet of 20th century, a romantic, a revolutionary, gave a whole new meaning to Urdu poetry. Freeing it from the shackles of traditional rhyming romanticism of Ghazals, till then restricted to only love poetry, eulogising unrequited love and smouldering passion, he gave full vent to his feelings and ideology in the, till then less popular, form of ‘Nazm’, a kind of free verse devoid of rhyming, but not rhythm. He brought realism, Marxist thought, socialist ideology, and above all revolutionary fervour to poetry, so in tune with the need of the hour, when the country was struggling with slavery of the foreign powers and fighting for independence and self determination. He wrote his famous poem “Mujh se pehli si mohabbat mere mehboob na maang…”, going on to say “Aur bhi gham hai’n zamane mein mohabbat ke siva; Rahataein aur bhi hain wasal ki raahat ke siva”. 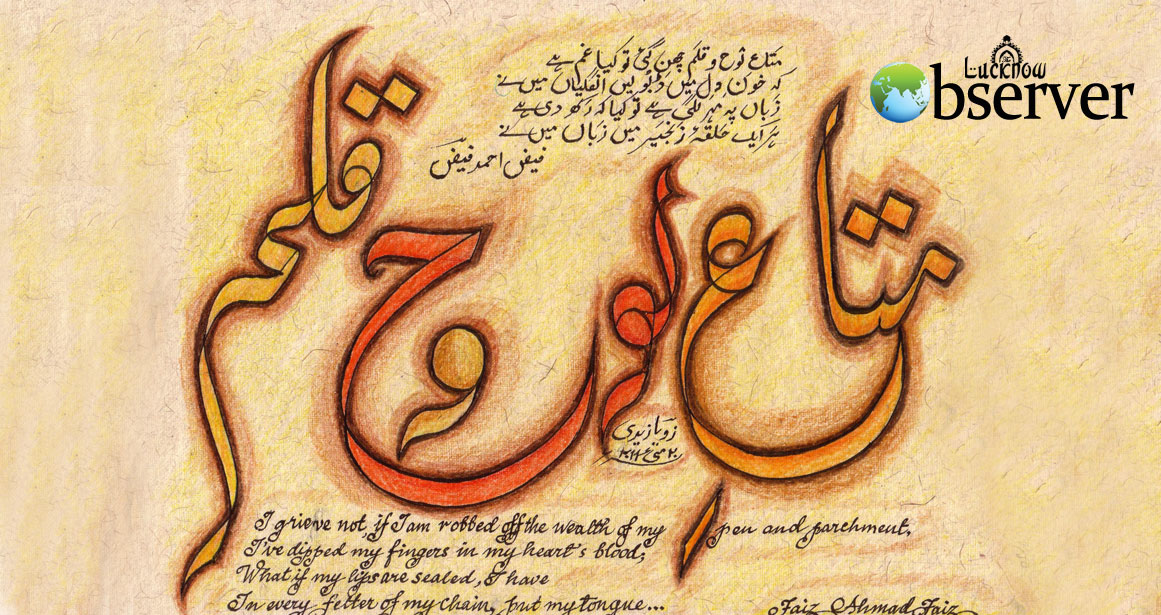 His poetry inspired a whole new generation of youth of those times, who recited his Ghazals and Nazm on the cross- roads, in tea-houses and during protest marches. Along with his contemporaries like, Majaz, Jazbi, Wamique Jaunpuri, Zauqui and predecessors Jigar Murdabadi, Josh Malihabadi and Hasrat Mohani, he brought a revolution in Urdu poetry. Being an vanguard progressive writer he belonged to the brigade of Progressive Writers of his times, who not only wrote poetry, but short stories and novels, among them, Manto, Bedi, Krishan Chandar, Asmat Chugtai, Khwaja Ahmad Abbas, Rashid Jahan Begum, and his own dear friend and comrade Sajjad Zaheer.

Born in Sialkot, Pakistan, he remained in Pakistan after Partition, becoming the most celebrated poet of Pakistan and enjoyed the rare distinction of being a legend in his own lifetime, a luxury even Ghalib could not boast of, while still alive. For his ideology and revolutionary ideas he even served jail sentence in Lahore and Montgomery Jails, but, he continued to write revolutionary poetry extensively even in the prison “Zindaa’n ki ek Shaam” & “Zindaa’n ki ek Subah”, which would be consistently ‘leaked-out’, thanks to his friends and his loyalists, and get published in the literary and political magazines, so much so that he celebrated the publishing of his collection of poetry ‘Dast-e-Saba’ while still in Lahore jail.

He was one of rare poets who brought romanticism to revolutionary poetry, considering poetry his beloved, his concubine, whom he loved with passion and daring. Like other socialist ideologues of his time, he believed that man was a product of his surrounding, therefore making the happenings in the society around him a subject of his poetry is mandatory, and believed in using his poetry as a tool for bringing about a change in the society, influencing the thought process of generations of his times and those to come. And in this he indeed was very successful. His poems were sung by the best Ghazal singers of his time, and were tuned and performed on the stage, hot from his pen, even before the ink dried on them. Mehdi Hasan, Mallika Pukhraj, Iqbal Bano, Farida Khanum, Abida Parveen, Ghulam Ali and Nayyara Noor all sang his Ghazals with great love and enthusiasm for his poetry and were all his personal friends. What is little known about Faiz is that he was a very affectionate human being and dear friend and a professor of English literature, which I came to know to my pleasant surprise when I heard him give a very lucid lecture on ‘Legacy of Literature’ to a packed hall in JNU. He would come to Moscow very often sometimes to meet his friend Sajjad Zaheer, it was during those visits that I met him quite often during poetic soirees we organised in his honour among Indian Students and at my aunt Shahida Zaidi’s place, who was a personal friend of his. I remember the first time I met him, I asked him to recite his famous, and my favourite, poem: “Yaad-e-ghizal Chashma, Zikr- e-Saman Azaara’n, Jab chaha kar liya hai, Kunj-e-Qafas Bahaara’n”. I was hugely disillusioned, courtesy his very prosaic style with a heavy Punjabi accent.

His poems like ‘Bol’, ‘Aaj Bazar Main Pa Ba Jolan Chalo’, ‘Ham Jo Tareek Raho’n Mein Maray Gaye’, inspired by the hanging of Ethel and Julies Rosenberg and based on the letters they exchanged. ‘Hum Dekhai’n Ge’, inspired by the extreme rightist regime of Zia-ul- Haque, and the intellectual censorship imposed by him. ‘Matah-e- Lauh-o-Qalam Chinn Gayee to kiya Gham hai” became anthems of protests in the 50’s and 60’s and to date are extensively quoted and recited by the progressive youth during protest marches and ‘Dharnas’.

Even his love poems are revolutionary in nature, in the sense that their thought content so different from the traditional love poem. His poem “Raqueeb Say…” (To the Rival in Love”) is a fine example of this- Inspired by the grand feisty lady of revolution, Rashid Jahan Begum, and written to her husband and his rival in love, Said –us Zafar, he writes in a very different mood to the one exhibited towards a traditional rival: “Ae kay wabasta hai’n us Husn ki yaadein tujh say, Jis ne is dil ko pari khaana bana rakhkha tha, jis ki ulfat main bhula rakhi thi duniya hum ne, Dahar ko dahar ka afsaana banaa rakha tha”. Instead of being jealous of his rival, he considers him as a comrade in arms, who shares the same feelings, the poet does, with his beloved, thus he is a kind of accomplice, this is an approach very different from the traditional hatred a lover feels towards his rival….. Faiz is unique in this respect.

Writer is from Aligarh and Rheumatologist by profession