Peerless Paratrooper of The Nation

Our flag is not merely cloth with inked stripes. It is a symbol that sings of India’s glory, in every stripe, in every colour, in every spoke. The sound of the tricolour flapping in the wind is the sound of patriot’s heart leaping with pride, the patriot who laid down their life and gave up their living long ago, bled crimson loyalty so that our flag can be waved high, our head can be held high. 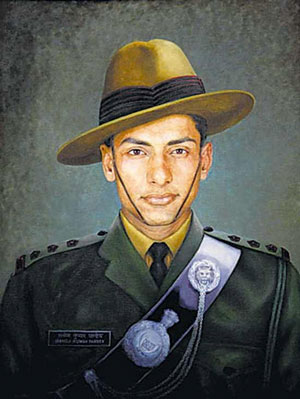 Patriotism is not characteristic to a definite era. It exists, persists, and seeps into the people generation after generation. Patriotism prevails as long as the nation does, in some cases, even after that. The spark of patriotism ignited by the Sang Rial of our freedom fighters has now turned into a forest re with a humongous amount of youth opting for the service to the country and its protection. Those who contributed in conceiving our country and its independence are patriot, and those who contributed in its protection are patriot. And every patriot who gave his life for the country is a martyr. Martyrdom as an adage in the combat forces described is supreme form of reward a lover of one’s country can be bestowed with. Indeed what better reward, to be wrapped up in the tricolor, the symbol of one’s country, once love and surrendered to god’s purity and simplicity through re and dust!

Captain Manoj Pandey was born on 25th June 1975 in the family of Shri Gopi Chand Pandey. He was as good a student as he was a sportsman. He always excelled in his studies and won many certificates and trophies in his school. After his Intermediate exams, he got through the NDA exams in his first attempt. In his SSB interview, upon being asked why he wanted to join the army, he simply answered that he wanted to win the prestigious Param Vir Chakra. And as fate shall have it, he eventually did.

He received his schooling from Rani Laxmibai College and later from U.P. Sainik School. He aced in his class and was also a top athlete. His hobbies were Hockey, Swimming and Athletics.

His mother Smt. Mohini Pandey brought his mind towards aadhyatm or spirituality. He was a rm believer of God and wanted to make every moment count. He was of the opinion that everyone has a definite time allotted to him and it’s upto him to do something worthwhile in that time to inspire people. He loved children very much. He was an avid reader and read different of books. He had a knack for gaining whatever knowledge he could find, and thus, read astrology and palmistry books too.

He has been in a habit of being victorious in every walk of life. From his academics to sports, extra-curricular to profession, Manoj Pandey always had his eyes on the zenith. As they say, old habits die-hard and he went on to achieve many victories for the country. Captain Manoj Pandey was enrolled in the 90th course of the National Defence Academy. After completing his training, he was commissioned in the 1/11 Gorkha Ries in June 1997. Manoj Pandey was a lieutenant when he led his platoon to the Khalubar in Batalik sector during Operation Vijay.

Captain Pandey’s regiment was initially stationed at Siachen. Later they were ordered to shift their base to Batalik sector. Col. Lalit Rai, Pandey’s commanding officer handed him the charge to win back the Jubar post. Two patrol parties to 16 Grenadiers and 3 Punjab regiments were already deployed before him but no news returned from them after 16 days had passed. It was later discovered that they had been killed-in- action by the enemy’s artillery. The enemy had acquired high grounds that gave them a strategic advantage.

When Capt. Pandey reached Kukarthan, he and his men were relentlessly attacked. He decided to commence his counter after the sunset. He waited there for the sky to turn dark and then attacked the blinded enemy. The fight the post went on the entire night.

 After hours of struggle, Captain Manoj decided to put an end to it. He made a sprint to the top himself, never heeding to the landmines, and captured the post. In that fight Manoj lost 9 of his soldiers.

With the reliability and reputation he gleamed of, Captain Manoj Pandey was later assigned to reclaim Khalubar post on 3 July 1999. This task was a really nasty one as his chivalry had to fight in a vulnerable area in broad daylight. He led his men to the enemy territory via a narrow ridge. They went through heavy and indiscriminate ring by the enemy. Seeing no way out, he took it upon himself to track down the enemy, and while doing so, was hit by a bullet on his shoulder. But this couldn’t stop him and he ran towards the enemy camp with a resounding battle cry “Jai Maha Kali, Aayo Gorkhali!”

In the midst of his charge, a second bullet hit him near his waist. But he rallied on with the ring on bunkers. He even switched to his Khukhari blade and killed two men in hand- to-hand combat. When he got through the first bunker, his men got pumped up and fell in line with the Captain. The Captain, on the other hand, was totally ignorant of his wounds and continued his charge unfazed, and spurred his on. But the wounds did take a toll on him and his legs gave way at the last bunker. Due to excessive bleeding, he couldn’t persist and breathed his last, but only after the complete eradication of the enemy. His final words were “Na Chhodnu” (Don’t Spare Them). After his death, Captain Manoj Kumar Pandey was awarded the Param Vir Chakra, India’s highest medal for gallantry, for his superlative display of valour, leadership, strategic genius, and integrity and service towards the nation.

Capt. Pandey didn’t merely conjure the intensity he had to face the enemies, he lived it…day in day out. Its proof can be found in his diary. Capt. Manoj Pandey maintained his everyday journals. He kept a personal diary with him and jotted down his thoughts. In his personal diary he wrote, “Some goals are so worthy, it’s glorious even to fail”. He wrote a poem for his mother, which run thus- “She is the star which shines brightly in the darkness, some one who will always give and bless”. Below these lines is Capt. Pandey’s heartfelt resolve, written bold letters. The words echo the valour and sheer determination the man was made of. The lines were- “If death strikes before I prove my blood, I promise (swear), I will kill death.”

The impacts of Captain Pandey’s bravery were tremendous. And this bravery, and even more so its impact, turned out to be the legacy of our hero. There are now various institutions and infrastructures named in his memory.

There is an apartment complex built by the Army Welfare Housing Organization (AWHO) in Ghaziabad, Uttar Pradesh for veterans. This complex is named after Capt. Manoj Pandey- Manoj Vihar. In a similar fashion, the quarters near Cardio Thoracic Center Hospital is named as Capt. Manoj Pandey Enclave. Also, the science block in the NDA is named Manoj Pandey Block.

A roundabout in an elite locality of Lucknow has been named after him and is popularly known as Manoj Pandey Chauraha.

Martyrdom though held very highly in the eyes of everyone, in not what a soldier, a patriot, a child of his/her soil would necessarily seek. If given a chance, every martyr would like to come back and serve our nation for eternity. Acquiring martyrdom is in itself a sacrifice. It is not to be viewed as a compensation to the loss of life, but instead, as an abrupt end to the dreams of a soldier who wanted to stay alive, struggle, suffer and serve his mother land a little while longer- an end that can’t actually be compensated. Such sacrifice, of life and dreams both, is a supreme sacrifice only meted out with supreme honor…. Such sacrifice can never be forgotten. And such sacrifice ignites the blood of our nation, generations of patriots after generations.