The Awadhi Dastarkhwan is famous not only for a variety of kebabs and qormas but also for different breads. The flat bread unique to Lucknow, that all of us know as- Sheermal, is the tandoor baked flat bread with a saffron dressing that tastes best with a plate of both kebabs and qorma.

As the name suggests, sheermal is made from a mixture of sheer or-milk and maal or ghee that is kneaded together for a while to give it that unique softness as well as crispness after it is sprinkled with ghee and then baked.

It is believed that during the reign of Nasiruddin Haider a foreigner called Mahmood had opened a small restaurant in Firangi Mahal. Nahari was his speciality and its popularity spread far and wide. He invented the sheermal to go with a bowl of nahari and this meal is now a distinct specialty of Lucknow.

Persians introduced the tandoor to India, where only plain rotis without ghee and pooris were known. Inspired by the deep fried pooris, Muslim settlers added ghee to the dough and rolled it in layers, giving birth to parathas. More improvisation on the paratha led to the birth of Baqarkhaani, that was a must at the spread of elite homes in the city.

The dough of the baqarkhaani was leavened with milk, desi ghee, zafraan (saffron), khoya, cream and dry fruits. To make the rich bread affordable to the common man, Mahmood also invented the sheermal, which was an instant huge hit with the khaas and aam aadmi alike.

A sheermal’s popularity was judged by the orders that Mahmood received that ran into one lakh sheermals on some special occasions. Mahmood’s chief chef was Ali Hussain who later opened his own shop. This shop continues to thrive in the famous sheermal wali gali in the Old Nakhas area to date.

In the sheermal wali gali there is a sheermal shop after every few meters. The first three shops of Syed Saab, Ali Hussain Sheermal Waley and Pahalwan ki Sheermal are the most popular.

“I started making sheermal from the age of 15 years when my older brother opened this shop 60 years ago. But today, because of stiff competition and lack of unity amongst us, we barely make ends meet as the cost of ingredients are high,” says Syed Murtuza Hussain who supervises the preparation of the sheermal and is the last in line of generations of sheermal makers.

The second shop is that of the legendary Ali Hussain Sheermal waley, from the days of Nasiruddin Haider, which has reopened and resumed business with renewed vigour.

“We decided to restart this business because this is our identity. We were innovators of the sheermal and continue to innovate, improvise and to take the sheermal of Lucknow to new heights,” says 25-year old Mohammad Junaid who is eighth generation in the family business. 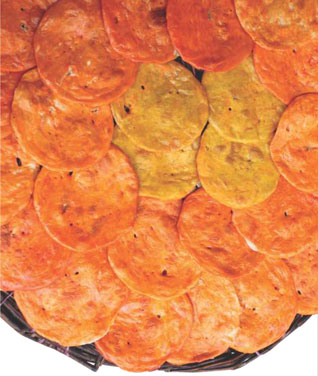 “The standard sheermal costs Rs 10 and weighs 150 grams and there is no upper limit in terms of costs that depend on the amount and quality of ingredients used in the dough,” says Junaid’s uncle, Mohammad Omar who is trying to retain the glory associated with the sheermal of yore by improvising some more on the same bread.

“Today, we also prepare flavoured sheermal with apples, and pista. Last year, we got an order, for 30 sheermals, presumably for Amitabh Bachchan, from Sahara Group and that sheermal was sold for Rs 700 each,” says Omar with an air of immense pride!

Diagonally right to Ali Hussain’s shop, is the famous Pahalwaan ki Sheermal. The owner of the shop Ali Akhtar, inherited the legacy from his father Hasan, also known as Pahalwaan famous for serving the softest sheermal to the city’s foodies for the past six decades. Achche Miyan, chief karigar, has been preparing sheermal for the past 50 years in the same shop but laments that skilled karigars are vanishing fast.

“There’s a lot of competition and it’s difficult to maintain the quality when costs increase but not the selling price,” says Achche Miyan as he dexterously holds a pair of pincers to scrape and to fish out from a blazing tandoor, sheermal after sheermal that is the most sought after bread in Lucknow even today.

Did you know that until a decade or so ago, the sheermal was prepared in the shape of a paan. This is because the Nawabs were lovers of art and wanted their food to look beautiful too. Today, it is shaped round in order to save time. For it takes about an hour to prepare some 100 paan-shaped sheermals, and the same amount of time to ready 200 round ones.