The Radical Torchbearer of Lucknow Gharana

For those who know and acknowledge that treasures and valuables exist in forms beyond currency and price, the Awadhi culture is a sea of riches beyond measure, beyond comparison. From the very basic cultural values of behaviour, mannerisms and tones to a much more magnified aspects such as its history and architecture, Lucknow has different pages of treasures and each page a plethora of gems embedded in it. The trends of performing arts in the City of Nawabs make no exception. Lucknow holds closely, an expanse of unique music and dances that are exclusively nurtured here and here alone. Dadra, Thumri, Ghazal, Qawwali, Kathak, Bandish etc., are some elements that not only enrich the factual database of Lucknow but also build up its air and the atmosphere of Awadhi arts. 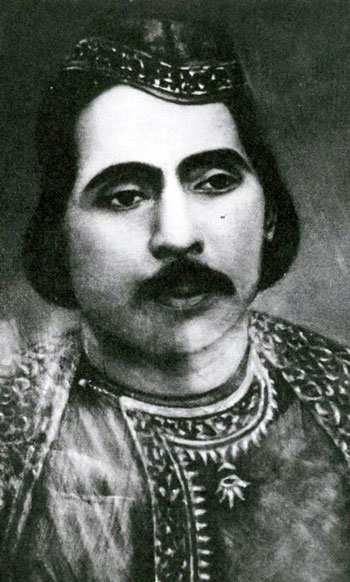 Kathak has been one such dance form which is an essential part of Lucknow’s identity. One of the many imagery that flashes in one’s mind, upon hearing Lucknow’s name, is that of this dance and the sound of the ghungroos. Kathak has been a prize possession of Awadh for ages, and will be for ages to come. The Lucknow Gharana is an institution, or rather a legacy that is known all around the world for its contribution to Kathak. Founded by Pandit Ishwari Prasad Mishra, the Lucknow Gharana is credited for the unique transformation of the dance into how we know it today, primarily under the guidance of Bindadin Maharaj. Belonging to the bloodline of Pt. Ishwari Prasad Mishra, Bindadin Maharaj was a stalwart of performing arts of his generation and a keeper of Awadh’s cultural treasure.

Born in 1830, Bindadin Maharaj was the originator of the Lucknow Gharana. He and his brother revolutionised the way Kathak was seen and glorified the dance to a much higher standards. He was born in Handia Tehsil in Allahabad district where his father Durga Prasad used to live. Of the three children of Durga Prasad, Bindadin and Kalka Prasad were what in local language is called ‘real’ brothers. Bindadin never had any children. Kalka Prasad, on the other hand, had three sons, namely Achchan Maharaj, Luchchu Maharaj and Shambhu Mahaiaj.

Bindadin received his training from his father and his uncle Thakur Prasad and he passed this knowledge on to his Nephew Achchan Maharaj. He started receiving his formal education in music from the age of 9 and practiced only percussion syllables of “Tig Da Dig Dig” for 3 years, 12 hours a day.

Legend has it that when he was a little boy, he entered into a discourse with the Pakhawaj maestro Kudau Singh regarding the tabla in Nawab Wajid Ali Shah’s court. At that time, Thakur Prasad, his uncle, was employed at the court and was appalled by the little boy’s behaviour, lest he should cause embarrassment in the court. In the course of the events, Thakur Prasad had to ask Bindadin to step up for his performance in the court. And when he performed, everyone present in the court was enchanted by his dexterity and admitted that the 12 year old was in more touch with the art form than the ‘Pakhawaj King’ Kudau Singh. Even the Nawab was greatly impressed and rewarded Bindadin with great wealth. As he came of age, Bindadin developed his art and gained popularity and credibility for the same. With fame and credibility of his art, money followed as well.

He also had expertise in singing and composing Thumri. He trained many famous and reputed Thumri singers of that time, like Gauhai Jaan, Zohra Bai, among others. He showed great character throughout, and led a simple life. But this simpleton had extraordinary talent and is said to have composed about 1500 new types of Thumri.

He composed hundreds of Thumris and Bandishes especially for Kathak dance. Such compositions carried his signature Mudra or ‘Name de Plume’ as “Binda Kahat”. These compositions were compiled in a book called Ras Gunjan by Pt. Birju Maharaj.

During the First War of Independence he left Lucknow for a while along with Thakur Prasad. He travelled to Nepal and then to Bhopal. He got a warm welcome in these places and was not only revered as a dance phenom but also bestowed with a lot of riches as offerings.

He followed Lord Krishna with absolute dedication. His portrait shows that at the time of dancing he’d wear Achkan, Churidar and Dupalli cap.

Bindadin Maharaj and his brother Kalka Prasad became inarguably the most noted dancers of their time. While their ancestors held specialisation in either one or another dancing elements, Bindadin and Kalka Prasad laid the cornerstone and evolved the structure of modern Kathak tradition by combining all these scattered dance elements into one radical yet graceful style. Even so, Kalka Prasad was noted for his rhythmic prowess while Bindadin became famous for his poetic interpretations and his compositional skills. The following anecdote demonstrates Bindadin’s imaginative powers:

Wajid Ali Shah once organised a gathering of poets. It had become a common source of entertainment that the Nawab would introduce a scenario around which the poets would weave their poetry, giving logic behind the scenario. On this occasion, the Nawab dropped the clue of a tale of a maiden whose palms were found, on the day after her wedding, to be burnt.

One poet went about how the lack of experience of a newlywed took a toll on her when she was cooking for her husband. Another poet suggested that she had burnt herself while lighting an oil lamp. These, and all the other suggestions made by the poets in the court hinted at the woman’s clumsiness.

Then came young Bindadin’s turn to recite his version of the event. To everyone’s surprise, he not only came up with a beautiful narrative but also danced to its lyrics. The story Bindadin came up with, went thus:

The young woman is sitting expectantly on her bed awaiting her husband. She is prepared for a night of love, and yet she is experiencing the mixed emotions of joy, fear, and curiosity. At one and the same time her body experiences both desire and shame. The husband arrives: he begins to undress her, and out of a sense of modesty she quickly extinguishes the oil lamp by pressing her palm over the flame.

Being a connoisseur of performing arts and an acclaimed dancer himself, Wajid Ali Shah rewarded Bindadin handsomely with precious jewels for his performance.

He died in 1918, leaving behind a portal of art and expression that was so graceful with a hint of mysterious, that it hardly ever produced a critic. The institution came to be known as Lucknow Kalka-Bindadin Gharana which is presently under the care of Pandit Birju Maharaj. It is the most sought after Gharana in India and most famous as well, having been adopted in a number of movies.