Dastan of a Flood and Some Follies

Most part of the year, Gomti was a calmly flowing river. It was only during the monsoon season when heavy rains made her swelled up and overflowed causing some flooding in the nearby areas. Our house was located on the second road along the riverbank, Balda Road, which was never flooded except once in my memory when I lived in Lucknow. The year was 1959 or 60 and during the Monsoons, torrential rains were reported in the nearby towns making Gomti swell but there was no warning of a major flood in Lucknow.

On a Sunday, we sisters had gone to a Matinee show at Mayfair in Hazrat Ganj. When we came out of the cinema hall, we were alarmed to see a family employee Najju Khan standing at the entrance. “Why are you here”? We frantically asked in unison. He calmly told us that an hour ago, there was a warning for a major flood in Gomti by the afternoon. As a precautionary measure, our family had already moved to Darul-Seraj, our father’s uncle’s house, which was on the same road as ours at ten minutes walk in New Hyderabad, but built on higher grounds. We had to go there straight. But we insisted on going to our house first. It may sound crazy now but I wanted to pick up my most precious possession, a photo album, which had pictures of my childhood friends who had migrated to Pakistan and I never saw them again. It also had my new hobby, a collection of signed photographs of Urdu poets and some with their couplets written in their own hand. Najju Khan assured me the water would not reach the second floor where our living area was but I feared what if our more than a hundred year old house collapsed? So we did proceed towards our own house but could not get close to it, as there was water up to the knees in that area. Luckily Najju Khan had the keys to the house, as he was the last one to leave after locking all the doors. A neighbour’s son who was listening to me kindly offered to fetch my album if I gave him directions to reach the exact spot. I thankfully accepted his offer. Najju Khan went with him holding hands and soon my most precious possession was retrieved! I was most grateful to them and will never forget their kind act.

Our family had already moved to “Darul-Seraj”. Now to get there, we had to take a much longer route via Faizabad road, which still had less water. The roads around Darul-Seraj were flooded too and people had moved to the second stories or rooftops of their houses. Our family had also moved to the second floor, which had two rooms, a bathroom and a large open area. They had taken some small carpets, durries and pillows for the possible stay there at night.

On arrival at our final destination, we found our parents anxiously waiting for us and were relieved to see us. The children on all rooftops were in a festive mood, oblivious of the devastation all around them.

By late afternoon, there was so much water on the roads that some rickety boats were being used as a means of transportation. May be, some people like me thought of their most precious possessions and were returning home to fetch them. Many houses on lower ground looked liked boat – houses in Dal Lake in Kashmir. The roads and streets looked like canals in Venice but the rickety boats did not resemble the Gondolas in Venice!

Some areas in Aminabad and Chowk – Nakhas in old Lucknow were still dry. Some generous families and businesses pooled resources to prepare food and drink bags and the government gave the helicopters to drop the bags at homes in the worst affected areas, which were mainly along the river. I remember the food consisting of Naans and curried vegetables, yogurt and sweets but some neighbors boasted of receiving Tunday ke kebabs and still others, even Nahari! Or, was it their wishful thinking?

What must have happened to the thatch-hut and mud-house dwellers is anybody’s guess! The radio was not transmitting any news about them or news of any loss of life. It was only reporting the water levels in different areas of the city and the weather report. Dwellers in brick houses were contented with their own provisions and safety, and not talking about the fate of the less fortunate ones.

All the youngsters in the neighborhood were enjoying themselves trying to communicate with their neighbors by shouting at the top of their voices. Only children in the Ramkote house (baba, Baby and Manju) next to ours did not have to shout. Those at a distance, who could not hear or be heard, thought of a smarter way of communication by writing in bold letter on white bedsheets and showing to the distant neighbors. It was started by the boys at Professor Waheed Mirza’s rooftop and picked up by others. Two mischievous young girls in our family, my sister Yasmin and a niece, Asma also picked up the idea: They wrote: “S.O.S.” in bold letters on a table cloth and showed it to a helicopter. For them it was a prank, without realizing its consequences. In no time, a helicopter approached our house and became static over our heads. It threw air with such force that most of us started falling down trying to get into the rooms. The small carpets, durries and pillows started flying and falling down in the water in the lawn. A ladder was lowered from the helicopter to pick up the one in trouble. But there was no one in trouble. The elders felt like putting the two mischievous girls on the ladder who were hiding under a bed in the room very frightened. (Asma is a grandmother now and I hope her grand children do not read this report!) The volunteers were rather annoyed to learn that it was only a prank. The next day, several newspapers carried this news. Some gave the picture of the house as well and it was seen in Delhi also. An uncle was a Member of Parliament at that time living in Delhi. After seeing the picture of his house with the helicopter and a lowered ladder, he panicked and requested the government to lend him a rescue boat in Lucknow to reach his house and move his family from there. He was obliged and the next day, he arrived in Lucknow and came to the house in a fancy boat. He was relieved to find his family safe and well but was furious to learn that the youngsters, who were in majority and having fun did not want to move from there. They could not be left alone so the elders also had to stay. Actually, they also did not want to leave because they expected to return downstairs soon and start getting the house cleaned as soon as possible. Uncle returned to Delhi alone, very disappointed and angry with his family, naturally!

The water did not reach Darul-Seraj ground floor because of its elevation but our own house was less than six feet of water for two weeks. It became unsafe to live in but did not collapse, as I had feared. But there was a lot of destruction in many areas of Lucknow.

Gomti originates in the “Gomat Taal” in the form of a stream, in Madho Tanda near Pilibhit, Uttar Pradesh. After 20 kilometers or so, a small river, Galahee joins it adding volume to its waters. Then, after a hundred kilometers it reaches Mohammadi Kheri, a tehsil of Lakhimpur Kheri district and starts taking the form of a river when some tributaries such as: Sukheta, Choha and Andhra Choha join it. Later, other tributaries like Kathina at Mailani in Sitapur district and Sai River near Jaunpur join it and Gomti becomes a full- fledged river. After 240 kilometers Gomti reaches Lucknow. There are fifteen towns located on its banks and the major ones are: Lakhimpur Kheri, Sultanpur, Jaunpur and the largest is Lucknow. Gomti extends approximately 900 kilometers through Uttar Pradesh and ends in the Ganges near Saidpur in Varanasi district.

Writer is an Applied Linguist and a freelance-writer 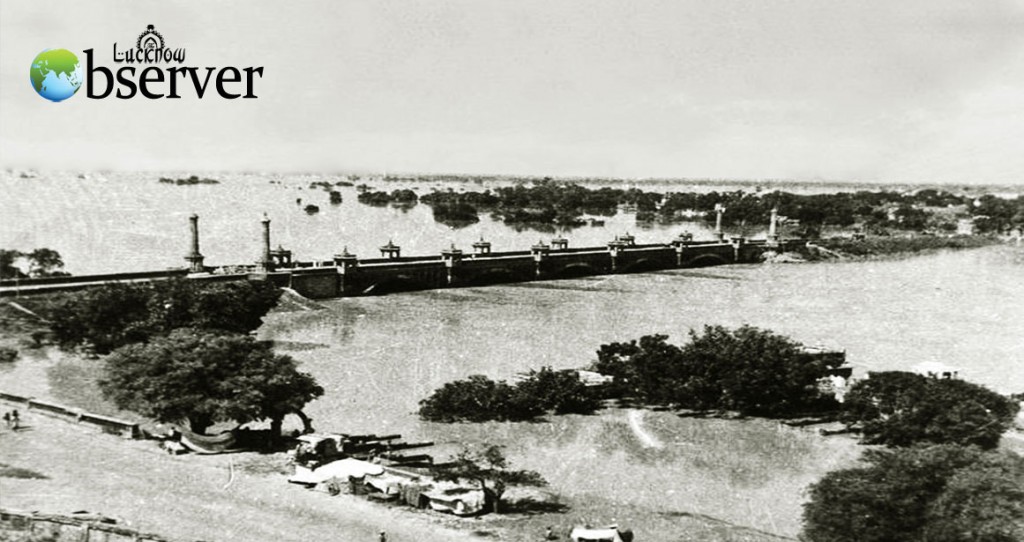