A Legacy of Master Chefs

In the fading portrait of Lucknow’s etiquette there is no shade, which has not been filled. No aspect is there on which writers have not written their bit. Now if anything more is penned down it seems nothing new. Yet authors are still writing and would continue to do so. In course of this dilemma, this writer’s inquisitiveness got the better of him and his search narrowed down to find more about the renowned chefs of Lucknow.

One gets to read about the tales of the kitchen of Nawab Wazir Asif-ud-Daula in books comprising of the history of Lucknow or Awadh. However, not much has our generation seen or heard about the venerable chefs. If this famous feature of Lucknow is not written down then the next generation would certainly be deprived of this precious legacy, and we would be responsible for this shortcoming. Our generation may not have seen Lucknow’s most famous chef, Haji Ala Bandey, but they have very much heard about him from their elders.

Just as in Lucknow and adjoining areas, occupational localities became a habitation trend named after them. Similarly, the chefs or cooks clustered together to inhabit in different areas of Lucknow. Where so ever this locality of cooks got inhabited it got the name of ‘Bawarchi Tola’ or cooks quarters. The first ‘Bawarchi Tola’ in Lucknow was near Agha Meer Deodhi (dwelling); second was near Pul Ghulam Husain; third in Husainabad and the fourth got inhabited in Daliganj. Not many descendants are left to be traced out at ‘bawarchi tolas’ of Agha Meer Deodhi and Husainabad because we could not find anyone connected to the antiquated families of chefs hailing from these areas. However, ‘Bawarchi Tola’ of Pul Ghulam Husain comprised of a good number of families of age-old chefs who still exists and closely guards the heritage of their ancestors till date.

Ramzan Ali hailed from present day Alam Nagar of Lucknow, in 1786 during the reign of Nawab Wazir Asif-Ud-Daula and shifted his residence from the ancestral house to Kashmiri Mohalla near Pul Ghulam Husain. At that time there used to be only a few houses in Pul Ghulam Husain locality. When Ramzan Ali shifted over to Pul Ghulam Husain, the habitat of Lucknow’s venerable chefs was located at the back of Sultanul Madaris or the colony of the royal chefs. Ramzan Ali never regularly served as a chef in any of the household kitchen. Instead, he cooked only at weddings, ‘majalis’ or at functions and receptions for a decent remuneration. He used to be specially called to the palace of Nawab Sultan Bahadur, which at that time existed behind Dargah Kazmain, where he used to be awarded with ‘Asharfis’ as remuneration. Ramzan Ali’s ‘Sultani Dal’ was very popular. It was ‘Arhar Dal’ cooked in earthen pot and was decorated served in earthen bowls. In one kilogram of lentil, same quantity of ghee and cream were added. ‘Shabdegh’ is also a novelty of Ramzan Ali, which is, generally, cooked during the winter season. Whole turnips, soft and tender portions of goat meat, ‘Koftas’ or small balls of minced meat, stock of goat’s bone marrow, cream, almonds, skewered coconut, saffron and spices grinded on stone and strained through thin muslin cloth were put in ‘Shabdegh’, which required to be cooked on low flame for 24 hours. It was customary to eat ‘Shabdegh’ with ‘Taftans’. Those days ‘Taftans’ were baked in earthen tandoors or ovens. Now the baker use iron ovens to bake these ‘Taftans’ and is often referred as ‘Sheermaal’.

‘Shahi Tukra’ was another improvisation of Ramzan Ali. Nowadays it is made of bread, but the original ‘Shahi Tukra’ used to be made of ‘Sheermal’. The story goes like, that the leftovers of ‘Sheermals’ at weddings were converted into ‘Shahi Tukras’, which accompanied the meal as a dessert on return of a baraat party. In one kilo of ‘Sheermal’, three kilos of milk and two kilos of sugar were added, and, as in those days, ‘Khoya’ was not available, cream was used to knead the dough to make ‘Sheermals’. Saffron water was sprinkled to make the ‘Sheermal’ in order to make one of its side crimson.

Ramzan Ali’s son, Ala Bandey earned immense fame in his era. His popularity had spread not only in Lucknow but also in adjoining states. It was the era when the rule of the Nawabs of Awadh had overturned and Awadh was under the control of the British Government. After the First War of Independence of 1857, the last ruler of Awadh, Wajid Ali Shah, had been dismissed and dispatched to Matia Burj (Calcutta).

Ala Bandey took the legacy of his father to the very heights of wonder. He used to make about 22 varieties of kababs. Among them, his ‘Bhunga Kabab’ was simply breathtaking. This kabab was in the shape of ‘Gular’ (sycamore) and was very soft and crisp. On partaking it, ‘Ghunge’ (gnats) would springs out of it like they do from ‘Gulars’. It never came to be known that what kind of husk and powder compound was used to prepare this magic.

It is interesting to note that the recipes had inputs from the local hakims as well. The method of tying a bundle of spices in cloth for cooking is also the modus operandi of a reputed hakim. Among the Lucknawi delicacies ‘Kuliya’ of potatoes still retains a pristine status. Shapely selected potatoes are first neatly peeled and every potato is cut through into two equal pieces, then these pieces are fried in ghee on low simmer till they are red and a mesh starts to appear on them. Then they are put in prepared meat masala and simmered for some time, and, finally, when the gravy is ready ‘Kewda’, saffron and sweet ‘Ittar’ are added. It still remains a lovely entrée for Lucknowite. Whether it is sorrow or gaity, ‘Walima’ or ‘Ruksati Ki Dawat’, anniversary or ‘Chaliswan’, fried potatoes curry is a requisite on a Lucknowi’ table spread. It is said that ‘Kuliya’ of potatoes was concocted by a renowned hakim of ‘Jhanwai Tola’.

‘Zafrani Paratha’ and ‘Zafrani Murgh Musallum’ were the specialties of Ala Bandey. The exclusivity of Lucknow’s ‘Nihari’ was that its sumptuous taste became two- fold when kept over night. At that time ‘Nihari’ was eaten with ‘Aabi Roti’, which was quite different with the present day ‘Khameeri Roti’. It would be a great injustice if Haji Ala Bandey’s ‘Machchhi Musallum’ were not to be mentioned among his outstanding dishes. This whole fish was cooked in a flat earthen pot over low flame and equal amount of ‘Desi Ghee’ was slowly poured over it, moreover, it was even soaked in double quantity of curd. This delicacy would be seen only on the tables of the nawabs and royalty.

Among the other dishes of Ala Bandey, ‘Muzafar’ (zarda) earned special acclaim. Four kilos of sugar and half a kilo of ‘desi ghee’ were put in one kilo of rice for his ‘Muzafar’ with which ‘chutneys’ of diverse kind of ‘Murabbas’ (Preserves) were relished. Gentlemen who did not want so much of sweetness ate the ‘Muzafar’ with ‘Malai’ or Cream of Milk.

Haji Ala Bandey had seven sons and all of them followed the family occupation. However, among them, Habib Ahmad earned a lot of fame. His dexterous hands acquired the same combination of delicious taste, hue and smell, which his father rendered in the cuisine prepared by him. Besides the nobility of Lucknow, Habib Ahmad received immense popularity in the darbars of the Rajas and Taluqdars of Khajurgaon, Mankapur, Jodhpur, Nanpara, Mehmoodabad, Jehangirabad, Saleempur, Atraula, Tiloi, Samthar and Gwalior. Even the chefs of Jaunpur could not get as much acclaim for their skill as Habib Ahmad gathered. Quite often people used to think that the famous dish ‘Mutanjan’ is a discovery of Nawabi times, but the fact is that this delicacy was the brainchild of Habib Ahmad. In one-kilo of rice, two-kilo sugar, one-kilo soft tender meat of goat, stock of 10 legs’ of bone marrow, half kilo almond, skewered coconut, saffron, cream and salt was mixed to prepare ‘Mutanjan’.

Even Habib Ahmad had six sons who too continued with their ancestral profession till they lived and ‘Bawarchi Tola’ of Pul Ghulam Husain remained their place of abode. We have seen one of Habib Ahmad’s sons, Naseer Ahmad. He was also counted among the reputed chefs of Lucknow. Naseer kept alive the tradition of his forefathers in the method of preparing new recipes. Curry of ‘dabi arvi’, ‘korma’ of Taal Makhane’, ‘Nihari’ of ‘Taal Makhane’ were examples of his ingenuity. ‘Kofta Nihari’ was also a novelty from the graciousness of Late Naseer Ahmad. Besides the regular dishes of Lucknow, ‘Bater Musallum’ and ‘Mofta Nihari’ cooked by his very hands have been relished by us time and again.

Another two sons of his are Absar Ahmad and Abrar Ahmad. Absar, at a young age started acquiring the methods with his father and today he is counted among the renowned chefs of Lucknow. Those who have known the cuisine of Naseer Ahmad would find no difference in the taste of food cooked by Absar Ahmad because his technique comprise of the tradition, he inherited from his father. He totally refuses to use aluminium or steel utensils for cooking, instead he utilizes plated brass ‘deghchi’ and ‘mahitava’. Last year, at the invitation of Nadir Rasheed and Yavar Rasheed, he participated in the Awadh Food Festival at JahanNuma Palace Hotel in Bhopal, which is connected with the name of Nawab Pataudi’s maternal grandmother, Begum Sultan Jahan. Many well known chefs displayed their talent at the festival, but Absar Ahmad laid out such a remarkable spread of Awadhi cuisine, which were, leave aside the taste, not even heard by the connoisseurs of fine dining. For instance, ‘Babi Arvi ka Saalan’, ‘Kofta Nihari’, ‘Korma of Taal Makhane’, ‘Korma Badam’, ‘Korma Sabz’, ‘Fish Musallum’, ‘Shahi Kababs of Fish’, and an awesome variety of Kababs- Nukti Kabab, Pasanda Dumpukh, Musallum Raan, Lapeta Kabab. In the vegetarian section there were Kababs of ‘Kathal, ‘Lauki’ and ‘Taroi’ and in dessert were ‘Chane ki Kheer’, ‘Shahi Tukra’ ‘Gulathi’, Jilani Khashka’, ‘Anannas Zarda’ and sweet ‘Haldi’. Absar Ahmad had also been called by the superstar, Amir Khan, to prepare the dinner at the wedding of his nephew, Imran Khan.

Absar Ahmad’s son is named Arshi Ahmad. He is about 22 years of age and he too is attached with his father in their ancestral profession. The whole clan of these people continues to grace Bawarchi Tola of Pul Ghulam Husain by their presence. 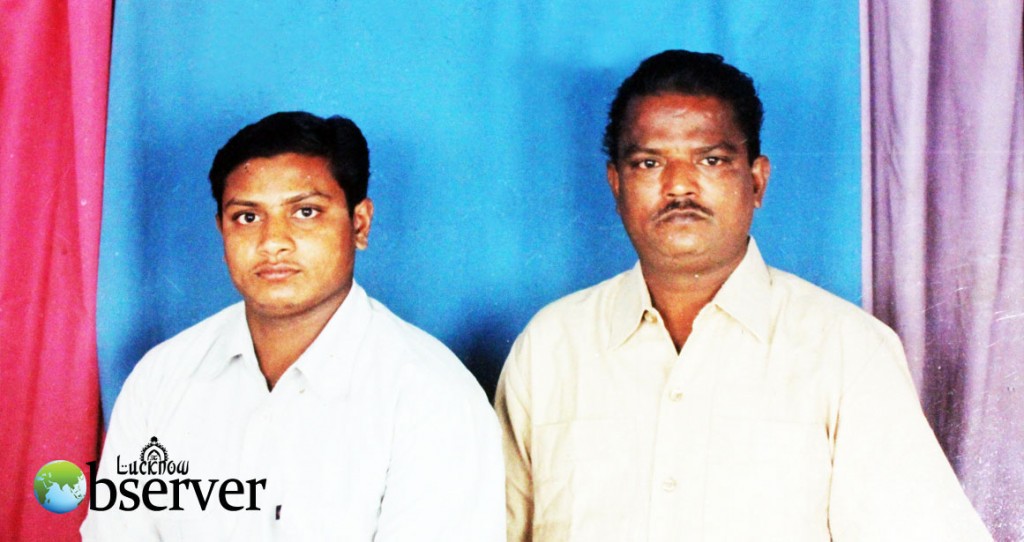