The Sweet Taste of Monsoon

The first recollection that I have of the ‘Anarse ki Goli ‘is sitting on my grandmother’s lap and boisterously declining the strange balls she was trying to make me taste. Nevertheless, once in, I was hooked for life. These rice flour balls adorned with sesame seeds fried in pure ghee may add another layer of fat to that growing belt of yours but trust me it’s worth the taste. There might be multiple choices as to what one must try or definitely have before leaving Lucknow-which dominates the food culture of Uttar Pradesh. Epicures may try and sway you towards the highlighted features that are spread over every micro blogging site insisting on the same galawati kebabs, malai paan etc. The more serious gourmands would advise you to explore deeper into the crevices. Anarse ki Goli is one such overlooked delicacy that can be found around the corners of the old Awadh.

The word anarse itself means the soaked rice grounded to make dough. The anarse goli are made by soaking the rice, making the dough adding sugar or jiggery to it and then deep frying it in oil or ghee after coating it with sesame or white til, until a perfect light brown. Sometimes the white anarse pops out of the crispy coating and that version is the standard as much as the usual round perfect one. Then small round balls sweet with the soft earthiness of the soaked rice and the unusual flavour of it, and the crispiness and balance of the til coating, make it an ideal wet weather munchies and it is hugely popular dominant among the old sweet shops of the streets of old Lucknow. ‘Anarse ki goli’ can be particularly tried in one such outlet, namely being the Haji sweet shop- Nakkhas Tiraha, Old Lucknow.

Started about 50 years ago, by Haji Ghaffur and now run by Haji Mohammed Faisal. The owner remarked, “Hamari dukaan par aaj bhi 1 rupaye mein mithai milti hai is mehngai ke zamane mei, sab Allah ki barkat hai.” It is claimed to be one of the best sweet shops with the most reasonable prices. Special care is taken to maintain the quality and the taste, which is the absolute necessity of the high standards maintained by these people over the years. The shop is a landmark in the locality of Nakkhas, which is now synonymous for a sweet taste and pleasant hospitality ñ Tehzeeb-e-Lucknow!

But there is a catch. It appears on the streets in sweet shops during the rainy season. It can be found on every street during the rains, being prepared freshly in the front portion of sweet shops, impressing the air with its flavours and drawing people towards it. The curious thing is that neither of the ingredients used for making anarse ki goli are seasonal yet they can be only found during the monsoons. The til or sesame crop typically is harvested in January, when it is celebrated in Makar Sankranti, incorporated as til laddoos while the rice is harvested around or before Diwali.

The day drenched by rains, the smell of the rain in the air and a little cold setting in the evening, it is usual to find people hoarded over a food stall, waiting for the small round sweet fritters or anarse ki goli to merge from a deep kadhai of oil.

This delicacy is chiefly north Indian and most north Indian states are familiar with it. Delhi, Bihar indulges in the same sweet bouts of anarse crispiness as us here. In Lucknow it is possible that some shops are more popular than the others, and people would have their favourites, but it is safe to say anarse are an easy make and they can be found in some uniform goodness. People either take them home to their families or enjoy the sweets standing in the rush. They are best when hot and fresh out of the kadhai, but their being made in ghee, allows them to be enjoyed even cold, they can be kept, without the loss of flavour or crispiness.

These little round anarse goli, when they appear finally in the markets are much waited for and for anyone who loves the monsoon time, it is sure interspersed with the sweetness of this snack. It has become an important part in the food scene for that time of the year and our monsoon evenings would be incomplete without their sweet crunch.

The writer is a student and has a keen interest in the city and its culture. 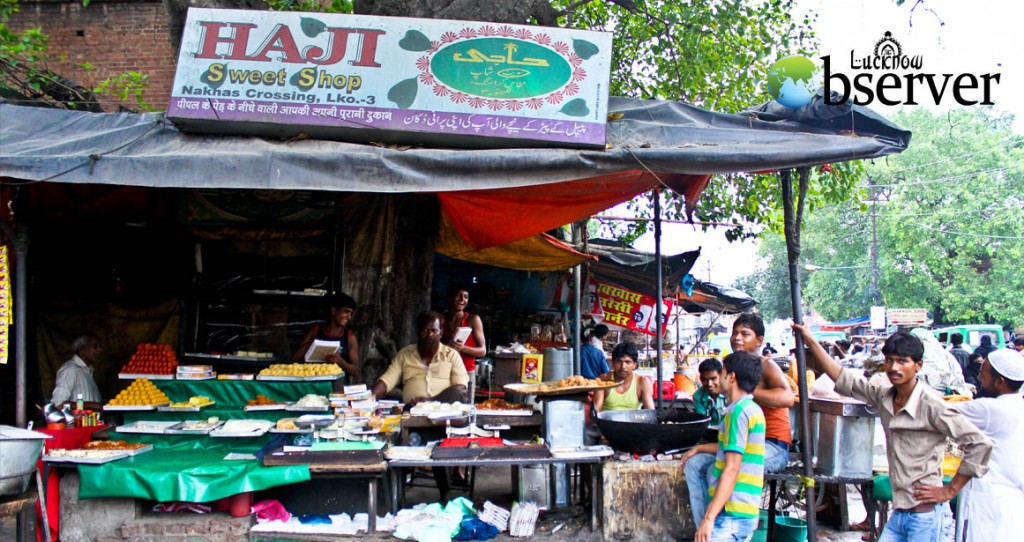