The coaching system was recently an extra advantage but it has now become the vertebrate of present day education system. Long time ago, there used to be a time, when coaching centers were a rare phenomenon, generally unheard of and only taken by those who were weak in their studies. But it is a way of life for students, aggressively promoted by the teachers and upto some extent by the parents also. Growing number of coaching centers across the city, show the increase in number of students opting for coaching classes.

The craze for coaching has led to opening of coaching centre in every by lane of the country, selling dreams of guaranteed success. One can see the newspapers, magazines or roads filled with different sort of advertisements like you can ‘learn English (or any other language)in 30 days’ or ‘score 90% and above percentage in Boards with our guidance’ or ‘the very common, clear PMT/IIT with our full two year package’. The time has come when more and more students are flocking these coaching centers as an alternative or supplement to school teaching. Many experts still believe that education is a natural process of learning and this is very true. For the regular, intelligent and attentive students these coaching classes are not really required till higher classes.

It is next to impossible to imagine the students, not going to these coaching centers in the present scenario. Coaching centers today have come out from being a home based coaching practice to a well run and successful industry. These centers actually play a key and deep role to help the students in their preparation for the major entrance tests and further do ensure that these diligent students qualify for admissions into the various reputed institutions. 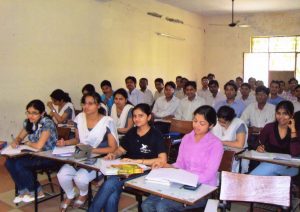 Going for these coaching classes may be necessary and beneficial for some students. After all, preparations for tough entrance exams like IIT and CPMT require intensive as well as extensive studies. This is because of the cutthroat competition in the present time. Unfortunately, even the exceptionally brilliant students have also started subscribing to such kind of coaching classes. It kills their drive, initiative and originality. Most Of these coaching centers provide just ‘spoon-feeding’ facilities for average students. They are of very little or probably no use to the really intelligent and brilliant students.

According to the official website of Kota government, there are in total 129 big and small coaching institutes in city in Hadauti region of Rajasthan. Following the footsteps of Bansal coaching centre, several other coaching institutes have mushroomed and successfully grown in the region of Kota and they in combination form a major part of the very large Rs 20,000 crore coaching industry in India. This is nothing but just a full time running commercial business.

A student has to pay as much as Rs 1 lakh or more tuition fees and an equal amount on lodging and boarding. This is the minimal fee required. Anamika, one among the students says, “It makes this successful coaching market of Kota worth Rs 300 crore.”

As such, unlike many traditional tuition centers, top running tuition centres in the country not only look and behave like institutes with a proper corporate approach – they are also very much engaged in the cut-throat competition.

Rising aspirations of the parents and the students, combined with the bad and degrading quality of mainstream education, have meant that examination-oriented tuitions have taken over the lives of most of the school and college students of the country, says another student.

Among the better known ones are Aakash Institute, Ahuja classes, TIME and FIITJEE. They focus on various exams such as the IIM Common Admission Test, Management Aptitude Test, IIT Joint Entrance Examination, as well as international exams such as GRE, GMAT, TOEFL and IELTS.

If we look at the recent results of the various surveys, it would not be difficult to find that approximately up to 83 per cent of India’s high school children are trying to juggle their time around school, various extra-curricular activities, and tuitions at these coaching centers, according to an annual report by the renowned Asian Development Bank (ADB). Apart from the high prevalence among high school students, the ADB study proved and noted that 60 per cent of primary school children receive private tutoring.

What many people still do not know is one of the most important fact, (in the increment of the tuition and coaching industry) is the Indian schooling system’s inability to match growing aspirations and requirements. If schools all over the country start providing enough facilities and proper education to the students to clear the various examinations then there is a possibility that these students might stop going to the coaching centers. Until and unless the condition of the schools and colleges improve, the coaching industry will keep on increasing and more and more students will eventually become a part of it.

As the competition is increasing day by day, students do not want to leave any stone unturned. Apart from this, seeing other students going for tuition, parents somehow also force their kids for the same, whether they need this or not. In schools, especially the ones present in the remote villages of the country, there is a shortage of teachers, thus students are left with no other option but to go for these tuition classes, if their parents can afford it. Be it any need, the tuition system in India is a great set back and the truth to the entire education system as well as schooling. Pupils and the parents of these children find going for tuition a very normal part of their circular activity and they somehow find it useful too. Though some of the parents will believe that tuitions might not help but they will still send their children to theses coaching centres. Of course, no parent will want that their child isn’t getting best.

These so called tuition centers or coaching centers actually take full advantage of today’s competition and quickly make money. Almost all the candidates who clear the civil services exams or other exams like these do take these private tuitions.

We all know how critical our parallel education system is – the coaching class industry is. It supports our over-loaded, creaking education system. The industry is booming and is estimated to be about Rs 5,000 crore (and growing annually at 20 percent)!

It’s high time that students should start realizing that self-study is by far more important than any private tuition. Only this sort of self-realization can stop the vicious racket of coaching centers.

Mahek Nankani
A student of journalism, the writer likes blogging and loves to write.